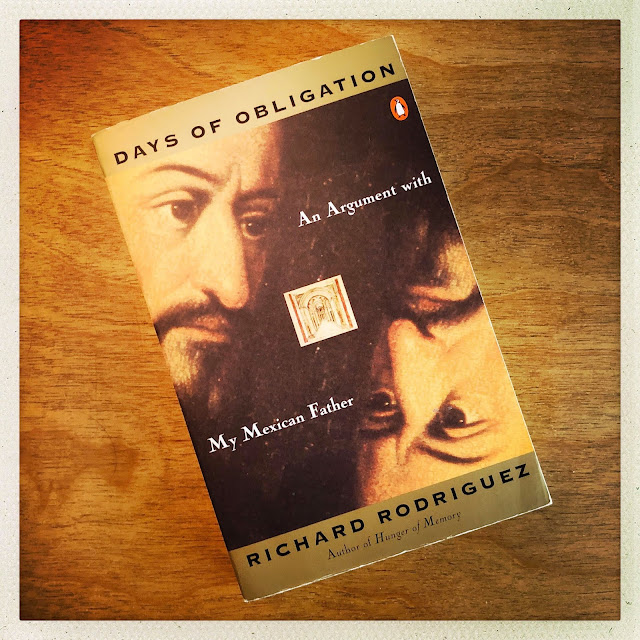 I've been thinking about Richard Rodriguez's great essay "Late Victorians," which first appeared in Harper's Magazine in 1990, then two years later in Rodriguez's second book, Days of Obligation. In the mosaic-style piece, Rodriguez "interrogates the landscape" around him, in his case the gay community in San Fransisco at the dawn of the AIDS crisis. He weaves observations about architecture, friendship, weight rooms, loss, bath houses, grief, interior design, pop culture—a string of points along which he hangs his overarching argument, one that brims with loss as well as hope: he is alive because he is not living. Stung by this paradox, Rodriguez considers irony upon irony around him, among them that the muscles that preening, mirrors-gazing weightlifters build is really a "parody of labor, a useless accumulation of the laborer's bulk and strength"; that the gay communities' rehabbing of the Victorian houses in the Castro district is an inside-out takeover of a structure long associated with heteronormative behavior, a home meant for reproduction and the spawning of generations of family. Society's condemnation of queerness "forced the homosexual to find his redemption outside nature," Rodriguez writes dryly. Thus, "The impulse is not to create but to recreate, to sham, to convert, to sauce, to rogue, to fragrance, to prettify." The complacencies of the barren home, he writes a bit later.

The essay gets deeply personal when Rodriguez considers his dear friend, César. A native skeptic, Rodriguez shyly avoids the bath houses where César makes nightly, blissy visits enjoying a "paradise" among welcoming men in a "region of complete acceptance." Yet you go home every night alone, Rodriguez protests to his friend. I go home satisfied, César corrects him. The tragedy, of course, is that César likely contracted the AIDS virus in the baths. "It was then I saw that the greater sin against heaven was my unwillingness to embrace life," Rodriguez admits in the essay's most powerful discovery. That Rodriguez writes as a devout Catholic feels less urgent than that he's writing from the point of view of an emotionally reserved man, an introvert, someone who is suspicious of beauty and sensuality and the shallow promises they make. And so: he doesn't live. And so: he survives, but at what cost?

In the essay's moving conclusion, Rodriguez, attending yet another funeral for an AIDS-stricken friend, shifts his tailbone on a hard pew, alone, a "barren skeptic" and an "inheritor of the empty mirror," the understanding presented not with bitterness but with a kind of rueful understanding. This rings graphically with me today as we collectively stare into weeks, if not months, of sudden isolation, of brutal withdrawal from physical contact within communities built to foster such contact, whether it's movie theaters and grocery stores or classrooms or rock and roll clubs. The context of Rodriguez's epiphany is more tragic than what the majority of us are experiencing now, thankfully, yet those skeptics among us (ahem) may be forced into making discoveries analogous to Rodriguez's. His "unwillingness to embrace life" was his choice, however a pained one, while our new normal, where we are defining togetherness in radical, baffling ways, has been thrust upon us.
Posted by Joe Bonomo at 2:31 PM