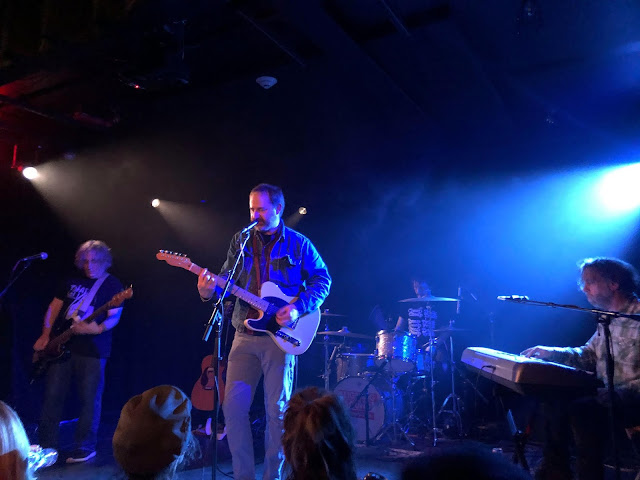 DOWN AT THE ROCK & ROLL CLUB—"We haven't done this together in seventeen years!" proclaimed Reigning Sound bass player Jeremy Scott, looking fondly at his bandmates.

Scott, to the audience: "Remember that seventeen-years-thing I said?"

Such was the warm looseness of a terrific Reigning Sound set at Sleeping Village in Chicago's west side. The band's original lineup—Greg Cartwright, Greg Roberson, Alex Greene, and Scott—is playing a brief swing of midwest dates (Milwaukee the night before, then onto Detroit), and showed little signs of rustiness. Pulsating but loose, urgent and restrained, the set highlighted Reigning Sound's underrated greatness, Cartwright's songs (about which I've held forth before here and here), so moving in their heart-stopping, evocative changes and melodies, finding a lived-in home in his bandmates' supportive playing. Though they've decades worth of long nights among them, they played with ferocity and precision, save the one or two fuckups and good-natured responses, the desperate ballads and stomping four-on-the-floor rave-ups charting the wide interval that these wonderful players roam in their music. They played mostly songs from their first three albums, this lineup's outstanding calling cards, throwing in a rockin' cover of Adam Faith's "I Don't Need That Kind of Lovin'." Grins, laughter, sweat, shut-eyed bliss—the guys in Reigning Sound ran the gamut of responses to the songs that they played, vibing on the packed club and the intimate room. And they warmly received well-wishers (a few bearing drinks) after the show, congregating on the floor in the front of the stage.

My favorite sequence came when the transcendent "I'm So Thankful," played in an upbeat arrangement unfamiliar to me, segued into "Since When," a darkly gorgeous song that illuminated the room. Both tunes are from the band's first album, and both sounded as fresh and surprising in their tenderness, truths, and stark beauties as they did in 2001. I'm so grateful.