Then the lights go out 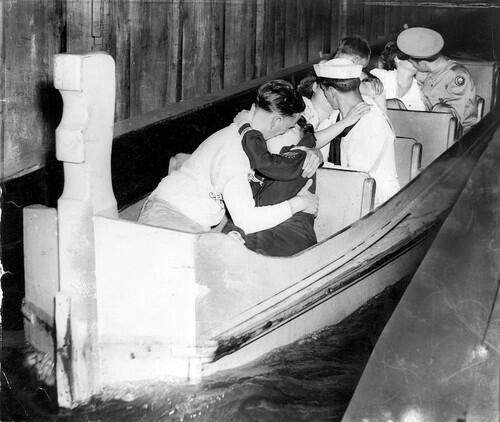 Bruce Springsteen has written stacks of powerful lyrics down the decades, but to my ears among the most moving moments in any of his songs is the wordless passage near the end of "Tunnel of Love," the title track of his 1987 album. The thirty-or-so seconds are beautiful but heartbreaking because, as uplifting as the music is, it's dragging with it all of the sadness and regret and confusion that comes before it, making it almost unbearably bittersweet. "The lights go out and it's just the three of us," he sings, "you, me and all that stuff we're so scared of"; a verse later, the grown-up acknowledgement: "You've got to learn to live with what you can't rise above." The music that follows slays me because no matter how many times I listen, I never know for certain from where it originates. Is the singer, reduced to melody now that he's said in words all he needs to, climbing aboard that gorgeous melody, uplifted by love that transcends the problems he's just sung about; or is he singing gamely, willing himself a pretty, affecting melody in the hopes that it will deliver him? Or maybe it's the saddest of all things: a surrender to defeat that's sung beautifully, a last-ditch hope or a rueful lesson that even the prettiest song can't fix.


I love overhearing the conversations that songs engage in over time. "Tunnel of Love"'s especially poignant, to my ears, played against the powerful ending of "Thunder Road," from Springsteen's 1975 classic Born To Run. In that song, feverish promises between the singer and Mary are everywhere, like wild flowers in a front yard. There's not much of a melody—the singer's too busy catching up with his words—and that makes the few changes all the more powerful. She's dated loser juvees and gear-heads, seen through their bullshit. The singer's idling outside of her house now, and all the saving he can promise her is beneath his hood; yeah, it's probably a metaphor, too—this kid's pretty poetic. And he sings one of the hottest lines in a Springsteen song: "My car's out back if you're ready to take that long walk from your front porch to my front seat." He knows that he's her type, but he also knows that after other guys drop her off they peel away before she gets to her front porch. Not him. "Mary, climb in," he offers, "It's a town full of losers, I'm pulling out of here to win."

What follows is one of the most well-known, and oft-played, passages in any Bruce tune, a feverish drama that he's recreated for decades on enormous stages around the world. Like much of early Bruce, the passion with which his band plays and with which he sings—it sounds like he can't do anything else but howl it at that moment—transcends the potential corn and cliche of the doomed young lovers, authenticity obliterating the banality as the song barrels forward. Played against the wordless passage in "Tunnel Of Love." a dozen rocky years later, the rousing ending of "Thunder Road" sounds less like a ballsy, confident promise than a wide-eyed kid's fantasy. This song in this car will take us anywhere we need to go, he assures her. But what neither of them see yet is that "Tunnel of Love" lies just beyond the curve in the dark, where melody, so buoyant in our youth, becomes weighted down by years and bad decisions, by ideals turned cynical, until the struggle to lift it, or be lifted by it, is a brand new, no less urgent song to sing.

I wonder if Bruce will write the third act. In his terrific 2016 memoir he essayed the difficulties of his four-year marriage to Julianne Phillips, unease evoked in Tunnel of Love, and of course has enjoyed a long and fruitful marriage to Patti Scialfa. Yet he's an artist natively tuned to the ways our hearts and dreams betray us, not to mention the songs that score those losses, and I bet he's still working on the tune that will track down hair-waving, porch-dancing Mary and that nameless woman in the tunnel, and discover what final destinations their fraught journeys took them to.

Top photo, "In The Tunnel of Love, Riverview Amusement Park, Chicago, 1943," via weheartit.
Posted by Joe Bonomo at 2:04 PM