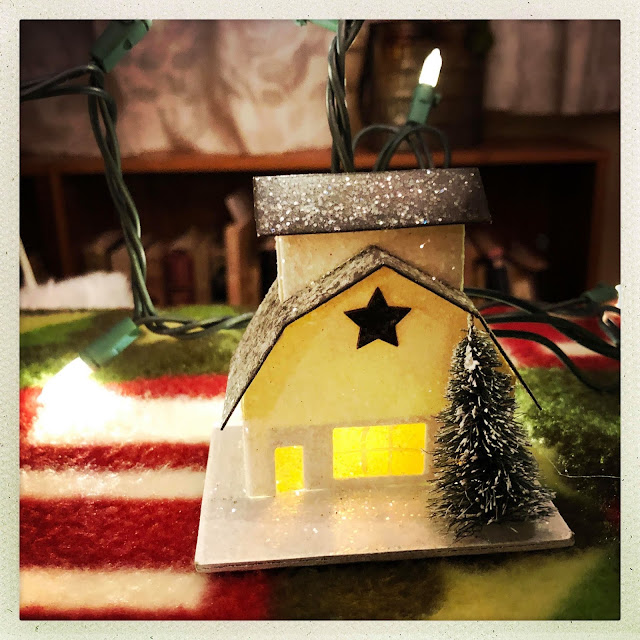 I was raised Catholic, though somewhere during my college years I became an agnostic. I fell in love with and married a casual Jew, and we don't have kids, so late December's evolved into a pretty secular and occasionally isolated time of the year. Which is fine. For decades we drove east to Maryland to visit my parents and family during this week, but last year and this year we've decided to lay low in quiet DeKalb, stoke the virtual fire of Christmas songs, a modest tree, evening drives past the more bedecked local houses, seasonal drinks with our friends. This is not to say that I don't feel the pang of absence. Christmas is a strange time of the year, a culturally-authorized period in which you're meant to be cheery, generous, and grateful for family, when in fact those good intentions often cruelly bounce off of those who don't fit the mold. What I'm really thinking about here, I guess, is what home is and what home means, and about how many people define it in ways which is in opposition to the mainstream. The pro-family small-town Midwest, where we've lived for many years, casts a long (if polite) shadow over those couples, straight or queer, who've decided not to have kids, whose home may not feature on the front of Hallmark cards or in pop-up ads. And if you're alone, by choice or by unhappy circumstance, whether you're straight or queer, or cis-gender or non-binary, married or shackin' up or single, your choice of a home—or, let's face it, where you've anyway ended up despite those choices—is entirely yours, and, I hope, is as warm and comfortable and safe and contended as those golden-hued homes of your imagination, and in movies and television ads, that you've extolled as ideal. Home is where you make it, bah humbug, what you call and define it.

As I write this, dozens of flights at O'Hare and Midway airports have been delayed or cancelled because of heavy fog; visibility's at a quarter mile. Not fun for those stranded, or for their loved ones awaiting the arrival, but as a victim of airport delays and crossed-off flights, I'm guessing that more than one of those stranded folk are using the opportunity to reflect, however unconsciously, about family and home and the ways we strive to meet the standards of both, indulging our better angels and wrestling with our worst, no less human, impulses. Everything slows down right about now. I'm gonna take a deep breath, take walks, call my folks, talk to my sibs, reads books, cranks tunes, get into the city, drink and dine with Amy, ignore the magnetic pull of the calendar, and resolve to plug into home, which after all is a place that we carry around inside of us as much as a place where we open and close doors. Happy Holidays, wherever you are, wherever, and however, you're home.
Posted by Joe Bonomo at 10:56 AM