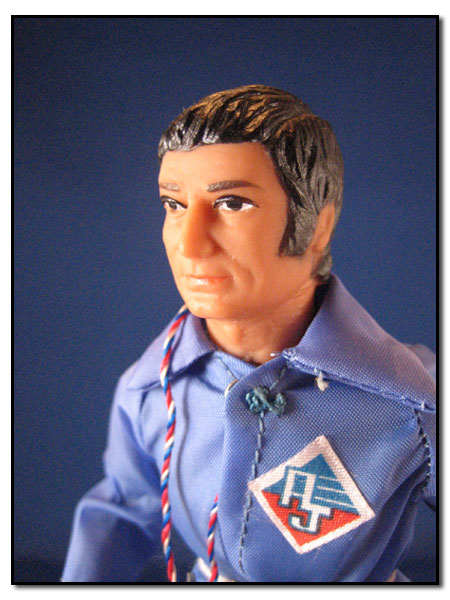 Recently, my friend Dan Epstein mentioned that he’d had a G.I. Joe growing up; I told him that I’d been an Action Jackson kid. Had we known each other as kids, the battles lines would’ve been drawn! We didn’t actually meet until 2012, and because we have so much in common—we share a deep love of music, baseball, writing, and more—Dan suggested that we each write a piece about our childhood action figures. Here’s mine. You can read Dan’s “Growing Up G.I. Joe” here. Enjoy!

Sometimes in my dark bedroom at two in the morning I'll ask myself: How would my life had been different if I’d been a G.I. Joe kid?

The fact is, I was an Action Jackson kid. Produced by Mego starting in 1972, Action Jackson allowed kids to stage all manner of high-paced derring-do in the backyard or basement or rec room. He had Adventure outfits, Military outfits, Sports outfits. Depending on which costume set your parents bought, he could be a scuba man or a secret agent, work at a rescue squad or race with a snowmobile team. I don’t recall now how he infiltrated our split-level home in Wheaton, Maryland, or why I was given him and not the more popular G.I. Joe. Did I ask for it? I’m one of six children for whom my harried parents had to buy presents at birthdays and Christmas, so it was likely a cost issue. Like the Safeway-brand Cragmont sodas that my budget-minded mom bought, I’m pretty sure Action Jackson was cheaper.

He was smallish, about eight inches high, tinier than G.I. Joe, whose strapping physique I noted at the Toys ”R” Us or in ads and in the hands of my luckier friends. A. J. was moderately handsome, the George Lazenby of action figures, though I don’t know if that made an impression on me either way as an eight-year-old. His hair “mod styled,” he came clean-shaven or with a beard. I had the bearded model, and played with him for hours. I’d been reading through the Mack Bolan Executioner series of books by Don Pendleton, so I knew a thing or two about thrilling rogue play, and I’d send A.J. careening across the skies or engage him in hand-to-hand combat with all manner of imaginary foes.

Then the Jungle House materialized under the Christmas tree. A faux bamboo and leaf hut, propped on four stilts with rope-ladder access, the House featured a crow’s nest, a telescope, a secret weapons bench, a signal-light, a radio hidden behind a sliding bookcase (!), and a trap-door floor revealed with the surreptitious twist of a tribal idol head on the floor (!!). There was a scowling ape and a bamboo cage in which to hold him once captured. (Generally, A.J. would lure the predatory ape to the trap door, and….) I loved this play set. With its spears and “Zulu” shields and other obvious appropriation of tribal exotica, I see it now, affectionately, as a relic of its era, but to a kid mesmerized by Tarzan books borrowed from the school library and Tarzan television movies on long Saturday afternoons—air-conditioned stays against the oppressive suburban summer heat outside—the Jungle House was head-liftingly fun, a beacon to my imagination. In the cool of the basement I staged many humid jungle days and nights. 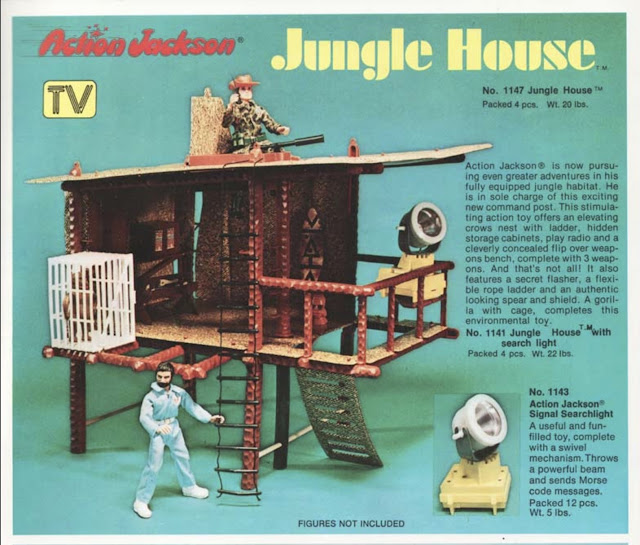 Yet lingering in the back of my mind was unsettling feeling that Action Jackson was a lesser action figure. Despite the commercials crowing that “bold adventure” was his game, he was clearly inferior to the taller, more righteously-outfitted G.I. Joe, and I unconsciously absorbed that. I, too, was clearly inferior to the bigger boys in school, the ones whose reach exceeded mine, who could approximate a “Kung-Fu Grip”, and though puberty was still a few years away, the playground popularity political boundaries were already gerrymandered, lines drawn between the haves and the have-nots. I was hardly feeling bold and adventurous on my way to Saint Andrew the Apostle School each morning, but with Action Jackson I could imagine.

I didn’t know it at the time, but I got into Action Jackson as his popularity was fading. In addition to having to compete with G.I. Joe, Action Jackson had to battle the National Association of Broadcasters. As the Mego Museum website recounts, the toy line suffered a “near-fatal disaster” in 1972, the first year they advertised on television. Mego hired Mel Hellitzer Advertising; Hellitzer was an “industry hotshot at the time, and he produced a terrific series of spots for Action Jackson, spots designed to put Mego on the map and attract a lot of attention.” Unfortunately, the National Association of Broadcasters (NAB) took note:


The television industry at the time was self-regulated by the NAB, which had certain guidelines policing content and claims made in commercials. Though we are by now used to seeing 3D Barbies skating and swimming and strutting down runways thanks to Reagan Era deregulation, the rules used to be much different. In the seventies, one of the cardinal rules of broadcasting was that toys and dolls could not be animated or otherwise presented doing things they did not actually do in reality. Of the spots Hellitzer produced, each one was almost entirely animated with stop-motion photography.

The site adds that the NAB pulled all of the television advertisements, a move that might have devastated Mego had the toy manufacturer not managed to pre-sell units from the first round of commercials. Classic Action Jackson: limited from the outset, hemmed in by sternly unimaginative bureaucrats, left to do only what he did. I was unaware of any of this at the time, obviously, yet in retrospect it makes a kind of grim sense. A.J. could never truly compete, but in my imagination he soared. He was mine, though I also intuited that he was lesser. I wonder now if my affection for underdogs, the marginalized, and those less popular began in my identification with Action Jackson. I didn’t only get by with him, we flourished together, even as I wondered if what I was playing with was an imitation, a pretender with a low ceiling. In 1974, the Montgomery Ward's chain sold an Action Jackson figure for the rock-bottom price of 99 cents. He had two right feet. I might’ve tried to make something heroic out of that.

Of course, I wonder if I’m over-interpreting this, a toy fatefully delivered to my childhood basement. Yet small, seemingly trivial events in adolescence can have lasting impact. In his story “Rose,” Andre Dubus writes, “We like to believe that in in this last quarter of the century, we know and are untouched by everything; yet it takes only a very small jolt, at the right time, to knock us off balance for the rest of our lives.” Whether I asked for him or he arrived unbidden, Action Jackson landed in my basement. Dwarfed by G.I. Joe, he was a legend in my mind.

Eventually I outgrew Action Jackson, and he disappeared from my life. I’d often play with him with my best friend Karl, and when Karl’s family moved to Illinois in 1974 a certain era ended. I can recall dressing the doll in a white lab coat sewn by my mom for a diorama I assembled for school—he was Thomas Edison, inventing stuff. Was there anything A.J. couldn't do? For years afterward I found evidence of Action Jackson strewn about the basement: a snow shoe; a black boot; a pistol. A year or so after the Jungle House was produced, the toy was retrofitted as a Planet of the Apes playset. It did much better business.

All images via Mego Museum.
Posted by Joe Bonomo at 2:42 PM

I thought that Jungle Set looked familiar. My older brothers had played with GI Joe, but when Planet of the Apes figures came out my last action figure Christmas was the bitch with that "Ape has killed Ape" tree house set. I did get a few Star Trek figures after that as a last hurrah--as featured in Sheldon's dreams in the Big Bang Theory. Nerds dream big.

This is a great post. I love hearing stuff like this. Did you know that Action Jackson made a return to toy aisles this year?! Mego is back as a company (tiny now) and produced Action Jackson as part of their Target exclusive line. Only one version, not nearly as good as the original, but with essentially the same head sculpt and outfit. Great times. I posted an article about him on my website.

Wow, Newton, great post. Amazing! Thanks for writing. I've linked your piece on mine.