What do you hear? 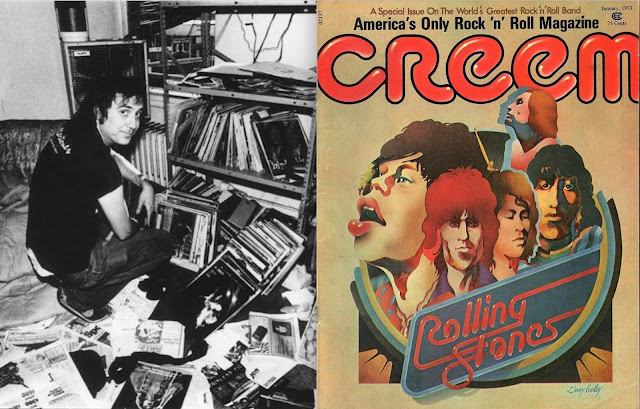 For the January 1973 issue of Creem devoted to the Rolling Stones, Lester Bangs wrote a piece titled "I Only Get My Rocks Off When I'm Dreaming," in which he reassess his take on Exile On Main Street. Like many at the time of its release, Bangs felt that the album was muddy and unfocused, mixed oddly and generally underwhelming; he came around to the album later, eventually loving it. Though he regretted missing seeing the band on the now infamous '72 tour, he was critical of what he saw as the tour's financial crassness and of the growing if inevitable distance between the band and their fans, a "phalanx of concentric circles" made up of "mostly nonuniformed bodies which kept the Stones permanently insulated." He added: "Just like Dante, if a trifle more sleazy and less important." In the process of reevaluating Exile, Bangs quotes some of his favorite lines, filtering his growing dissatisfaction with the band's princely self-regard through the attitude and stances in their songs. Maybe it was tinnitus, but Bangs got some lyrics wrong. Then again, there was no lyric sheet with Exile, and with Mick Jagger's voice mixed notoriously low, it became a party game of sorts attempting to decipher many of his turns of phrase. (She comes every time she pirouettes over me?? Well, that one was right)

At one point, Bangs tosses off an observation, pursuing it no further, but it stuck with me. "Most of us didn’t get the real words, because at their most vulnerably crucial moments they were slurred and buried in the tides of sound," he remarks.


Jagger had to sing it that way, in "Sway” and again in much of Exile, because that is the way his pride works. Besides, anything else would make it all too concise and clear—like putting the lyrics on an album cover, which is the most impersonal thing any rock ’n’ roll artist can possibly do.

That strikes me as an interesting contradiction. You'd think that supplying a lyric sheet to an album would be a personal gesture, an invitation from the band to the listener to get closer, to hear, and share, exactly what the singer's singing. But to Bangs it amounts to impersonality, a kind of neutral intimacy. I guess what he's getting at is that what we hear when we listen to a song without its lyrics at hand, often mangled, misheard, and wildly off, is what means the most to us, is the most deeply personal. What Jagger wrote and then sang might mean something to him—or also, you know, being Jagger, not—but what means more to me is the language that the song spoke with when I heard it, either a snippet in passing or in a sustained, deep listen. Sometimes a misheard lyric is what, in fact, we need to hear, without realizing it, and the "correct" words can feel off, wrong even.

Like the vague disappointment you feel when the person you imagine as a novel's character is played by the wrong actor in the adaptation. (Casting director, get the fuck out of my fantasy.) The graphic artist and writer Scott McCloud gets at something analogous with his take on amplification through simplification: as readers, we more strongly identify with a cartoonishly simple face than with a detailed, realistic face. “When we abstract an image," McCloud notices, "we’re not so much eliminating details as we are focusing on specific details by stripping down an image to its essential ‘meaning'." Less my weird uncle or my gym teacher, more a universal man.

So where Hendrix wrote Excuse me while I kiss the sky on the left, you hear kiss this guy on the right. Right? What you wanted or needed to hear, what you giggled at and dismissed or identified with strongly. What's wrong felt true.


The danger here is that a song's lyric—or a poem or essay or painting—might come to mean anything I want it to mean, a kind of relativism that's the death of an artist's agency, That, I steer clear from with urgency. But I'm sympathetic to what Bangs says, as it's a long and mysterious journey from pen to ear.
Posted by Joe Bonomo at 4:34 PM