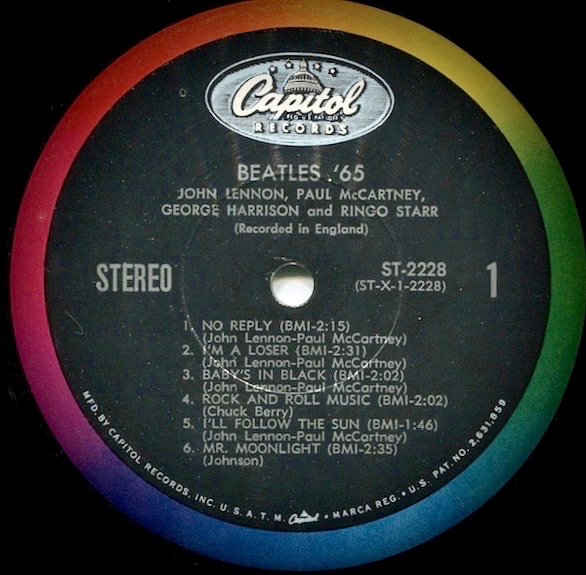 When I was a kid in the early 1970s, our family inherited a stack of albums including Introducing the Beatles and Beatles '65; both arrived without jackets, both beat up and scratchy as hell. I loved them immoderately, and learned to love music because of them. I have a distinct memory of listening to Beatles '65 in our basement, under fluorescent lights and a drop-ceiling, and playing "Baby's In Black," recognizing that the heart-sending harmonies in the chorus will return again in a minute. In my mind this was a First Recognition, an Origin Story, a Myth (and likely Precious, to boot), but I'm probably collapsing a series of memories, eliding, composing. None of that matters much: the die was cast. Experiencing the formal beauties of a pop song before you can articulate what structure is, before you can understand sound as song, before you learn what a "sea shanty" is and what it means to rip one off when a band's pressed for product up against a Christmas deadline, before you learn everything there is to know about that band and listening to everything they recorded, from demos onward: a body's pleasure with the mind catching up, panting to know. Those moments are rare but can be eternal. Mine are, as are yours. When I see myself as an eight-year-old in that suburban basement, eyes and ears going mad as the record spins, I see less a moment from my past than a tableau that transcends time and space. Heady stuff, but it starts in the heart.

Label via discogs
Posted by Joe Bonomo at 6:53 PM