I am telling you only how it was

There's a meme going around this week in which people post images of themselves from the beginning and the end of the 2010s, an end-of-decade cousin of sorts to people tweeting their greatest single accomplishment over that same ten-year span. Forty years ago Joan Didion took a similar vantage point, closing out the 1970s by reflecting on where she'd been and who she was in the tumultuous 1960s and where she was then, in Los Angeles, at her typewriter. "I am talking here about being a child of my time," she writes in the brief "On the Morning After the Sixties" in The White Album, her sixth book, published in 1979. She recalls her days as a student at Berkley in the 1950s—she was born in 1934—and how quaint so many of the details of that decade seemed to her at the end of the Seventies, suggesting the "extent to which the narrative on which many of us grew up no longer applies," a melancholy and disturbing discovery that every person makes at one point in her life. Also: history is personal, hardly a revelation until it's revealed to you for the first time with the clarity of an epiphany, and you wobble on your axis for a moment. "We were all very personal" in the Fifties, she writes, "sometimes relentlessly so, and, at that point where we either act or do not act, most of us are still. I suppose I am talking about just that: the ambiguity of belonging to a generation distrustful of political highs, the historical irrelevancy of growing up convinced that the heart of darkness lay not in some error of social organization but in man's own blood. If man was bound to err, then any social organization was bound to be in error. It was a premise which still seems to me accurate enough, but one which robbed us early of a certain capacity for surprise."

In her characteristic way, Didion then pulls wide: "To have assumed that particular fate so early was the peculiarity of my generation. I think now that we were the last generation to identify with adults. That most of us have found adulthood just as morally ambiguous as we expected it to be falls perhaps into the category of prophecies self-fulfilled: I am simply not sure. I am telling you only how it was."

Later, she gives an offhand narrative summary description ("I got out of Berkeley and went to New York and later I got out of New York and came to Los Angeles") observing that what she'd subsequently made for herself over the course of the 1970s was "personal, but is not exactly peace." In Didionesque cinematic precision, she then recounts the fates of her fellow Sixties cast members:

Only one person I knew at Berkeley later discovered an ideology, dealt himself into history, cut himself loose from both his own dread and his own time. A few of the people I knew at Berkeley killed themselves not long after. Another attempted suicide in Mexico and then, in a recovery which seemed in many ways a more advanced derangement, came home and joined the Bank of America's three-year executive-training program. Most of us live lives less theatrically, but remain the survivors of a peculiar and inward time.

She ends with: "If I could believe that going to a barricade would affect man's fate in the slightest I would go to that barricade, and quite often I wish that I could, but it would be less than honest to say that I expect to happen upon such a happy ending."

What I like here is how Didion, at her essayistic best, blends precision with ambiguity, a kind of clarion shoulder-shrug, the essential quality of the human condition if I have a vote. That Didion would view her Sixties persona skeptically is of a piece with her clear-eyed take on most things, but also a reminder that history is as personal as it is social, deeply and uniquely felt on the inside, a feeling often at odds with what the contemporary taste-makers are telling us we should feel, or did feel. Didion's ambivalence at the fates of her cohorts is personal to her as an individual in time, but universal also. Things happen, we label it in retrospect, decrying it or celebrating it, both in exaggerated terms. Meanwhile, here we are in the present mess. How will we feel in ten years, looking back? 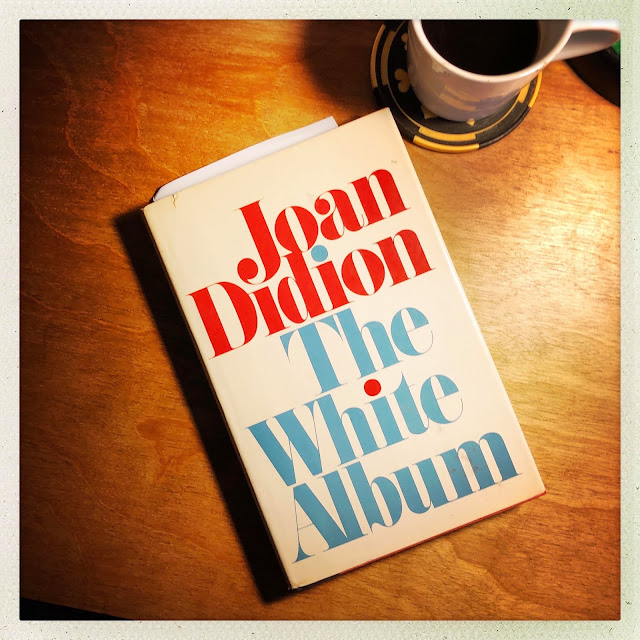