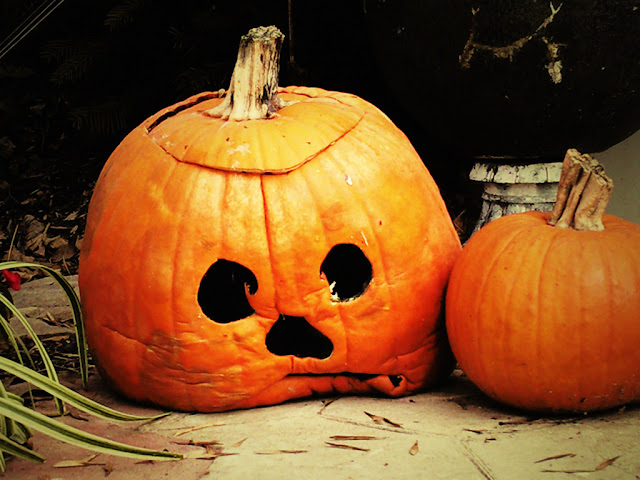 When I was a kid—eight or nine—I went out trick or treating, trailed by an older brother and his friends. My brother warned me not to run too far ahead. I of course ignored him. No more than three houses away from my own on Amherst Avenue, at the corner, a couple of older kids wearing stocking masks jumped out from behind a tree, grabbed me and threw me down, snatched my candy and bolted. I remember my brother running to me, and laughter, but the rest of the night is lost to memory. In my many retellings down the years, to friends and acquaintances and to the ceiling at two in the morning, I ran to my bedroom soon after the incident and, embarrassed and scared and ashamed and also angry, though I'm not sure I admitted to that response yet,cried the night away. I've never gone out for Halloween since. I tried the next year, but my hands cramped up and I could barely hold the plastic jack-o-lantern basket by its handle. I told everyone that it was too cold out. In fact, I was scared.

None of this maters or is important to anyone but the spectators in my interior cinema house, which oddly entertains the same guys every night. What's interesting to me is how over the decades I've likely amplified the incident, the way memory does. Van Gogh urged artists to "exaggerate the essential and leave the obvious vague." Scary proposition, that, when one's more interested in self-mythologizing than in telling the truth. The essential that I've exaggerated is Poor Joey, assaulted on Halloween, scarred and unable to continue darting down dark streets for candy; the obvious I've left vague is that the incident was likely less harrowing than I've made it out to be, is, in fact, hackneyed. It occurred, and it sucked, but was no more than harmful than any other act of juvee misbehavior suffered by unlucky kids everywhere. I used it as a pitying excuse to call attention to myself every October, and what's strange and not a little unnerving is that I now identify as a Not A Halloween Guy. I still love giving out candy at the door (though sadly the demographic in our neighborhood now skews toward retirees or the near-to, not young families), still turn up "Monster Mash," but I gave up on Halloween parties in college and later, and hardly revel in this time of year as millions of others do, virtually and otherwise. It's become a perverse identity, likely bound to issues I have with socializing, joining, wearing costumes—integral, melancholy aspects of my personality, all.

Careful what you wish for, Poor You, as you mythologize your origin story. You might end up missing a lot of fun as you grow to recognize the limits of self-pity. Bah Hallows.

Sad Pumpkin by Michelle Milla via flickr.
Posted by Joe Bonomo at 12:06 PM