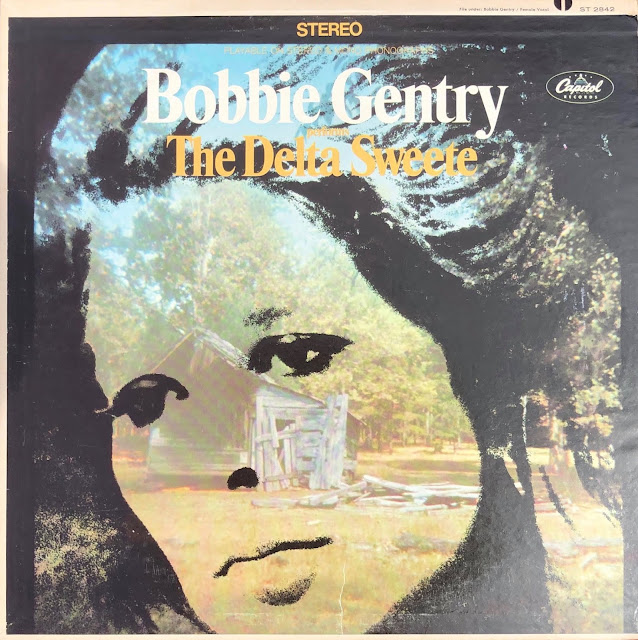 The Delta Sweete is one of my favorite Bobbie Gentry albums, and hands down my favorite of her album covers. The image of Gentry superimposed over a dilapidated backwoods shack is both of its era and timeless, a graphic illustration of the complications of homesickness, and the album's interested in that uneasy blend of sentimentality and realism. I wrote a few years ago in The Normal School that because The Delta Sweete didn’t match the commercial success of Gentry's debut Ode to Billie Joe, it’s remained a sadly underrated Americana original, an imaginative collection of linked songs about the tensions of Southern life near the close of a tumultuous decade, the bulk of it written by the Mississippi-bred Gentry. (Paired with her 1970 album Local Gentry, The Delta Sweete was reissued in 2006 by the Australian label Raven, and again last year as part of the mammoth and long overdue compilation The Girl From Chickasaw County: The Complete Capitol Masters). The liner notes promised a concept of sorts, narrative songs concerning “the dust, the fragrance, the molasses, grits and grit, the love, sorrow, and the humor of the Delta country…the people, young and old, bad and good, from Monday to Sunday.” Producer Kelly Gordon and arrangers Jimmie Haskel and Shorty Rogers seemed to have had in mind a kind of pop-rococo storyscape, a yoking together of genteel and melancholy steamboat-era strings and brass with earthy, bedrock rural balladry, blues, and soul—a fascinating and illuminating blend of styles.

As with the majority of Gentry's music, the album's mysterious, and not altogether easy to dip into; there's not a killer tune like "Ode to Billie Joe" to anchor the album; rather, the tone's ruminative, kind of distracted. Generally singing low in her register and closed-miked, Gentry chases down ideas. I love the album for that blend, which is echoed in the album cover. (The photograph's credited to both Gordon and George Fields.) A pensive Gentry looms over the ramshackle, leaning structure, both present in the moment and beyond time, recollecting and revisiting. What's the look in her eyes? Regret? Relief? Acceptance? Or something else destined to remain unresolved? It's a beauty of a composition, striking but eternal, both weird and comforting. The very image of nostalgia, that perpetually conflicted desire to return to a place that really only exists in our heads and hearts, the complications smoothed over by the passage of time and the distance between now and then. What we swear we won't miss often ends up consuming us. Cue Gentry's take on "Tobacco Road," below.