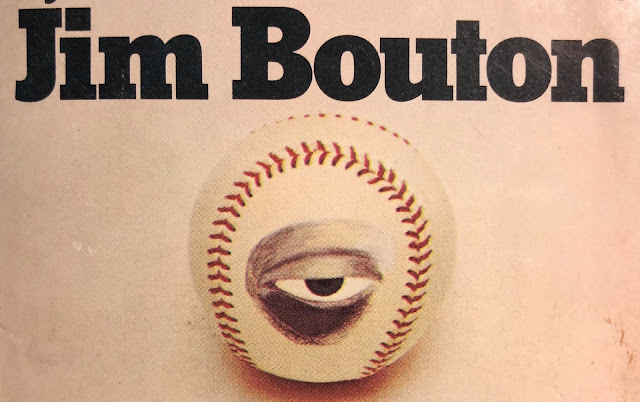 Here's a sample of what made Jim Bouton (1939-2019) great, two paragraphs from I'm Glad You Didn't Take It Personally, his 1971 follow-up to Ball Four, in which he takes on the so-called "sanctity of the clubhouse.” What’s a clubhouse? he asks.


It’s a place for men to change their pants. In this place baseball strategy (which may be as mythical as sanctity) is sometimes discussed. In this place a manager may give a pep talk to his players, or perhaps berate one for poor performance. (If he does, he will lose points, for berating is supposed to be done in the “privacy of the manager's office." This is almost as sanctified as the clubhouse.)

In the next graph Bouton, allergic to sanctimony, hones in: "So what I want to know is what’s so damn important or secret about what goes on in a clubhouse? The only reason to keep any of it secret is, of course, that most of it is silly. Nothing happens in clubhouse meetings. Nothing happens in clubhouses." He goes on to say that if he "really wanted to violate the 'sanctity of the clubhouse'" he'd out "all the bastards" who use the n-word on "supposedly integrated teams" and the "stupid anti-Semitic remark," adding that he could have revealed in greater detail "the mindlessness of it all." It's worth reminding ourselves again of how shocking many of Bouton's claims were to certain privileged quarters in the early 1970s. In one amusing section Bouton lists all of the self-righteously negative responses Ball Four elicited among players, managers, and ad executives, all of whom knew that what Bouton exposed was the truth, yet a truth they didn't want to acknowledge publicly for mostly petty, pious, and self-serving reasons.

After I heard the news that Bouton had died, I pulled Take It Personally off the shelf and opened randomly to the page where the passages I've quoted above appear. Bouton's batting average was terrific: his truth-to-power bravery and humor ring out on nearly every page. Baseball is very buttoned-up and tidy now; with talk radio and Twitter, every "blue" or otherwise indecorous comment that a player might utter or post on social media post-game, however innocently or humorously intended, can in seconds be magnified beyond proportion. Man, I'd likely be quiet, too, if I were a player. Thank God we had Bouton a half century ago to peer stubbornly through the decorum and report the "real" reality.


Bottom photo by Gene Herrick/Associated Press via The New York Times.
Posted by Joe Bonomo at 11:38 AM