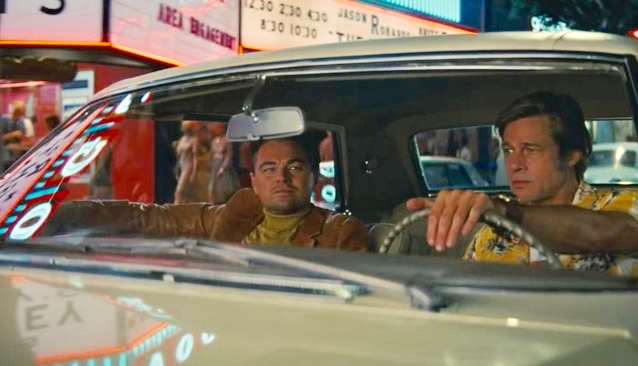 [SPOILERS BELOW. This is intended to be read after you’ve seen the film.]

I wanted to wait a bit before I considered Quentin Tarantino's Once Upon a Time in Hollywood. More specifically, I wanted to go to bed first. Because the phenomenon of awaking from a dream is central to the experience of the movie. Sure enough, what I felt this morning was what I felt last night at the film's finish: the bittersweetness of a pleasant dream yielding to reality. Tarantino's alternate version of the events of August 9, 1969 is a small part of his Tinseltown buddy film, but it's what you leave with. The violent comeuppance visited upon the Manson Family first felt to me tonally at odds with the film—it's over-the-top and horror-film gory, and played for laughs, I think—but a bit later I understood that this is a kind of communal revenge fantasy led by Tarantino against Manson and his followers for the despicable acts that they committed, and its excessiveness felt justified (though the scene's still too long and needlessly explicit). The film's general dismissiveness of Dirty Hippies is of a piece with Tarantino's reclaiming of Sharon Tate, and others victimized like her.

The soundtrack to Once Upon a Time in Hollywood is fabulous—driving, blissy AM rock & roll, pop, and folk—and the songs evoke the era in rousing and dimensional ways. I'm always a bit amused when period films cram Top 40 and advertisements into every nook and cranny, but Tarantino reminds us, as he often does, that songs score our lives whether we're really paying attention to them or not. His blend of actual sound and commentary sound—car radio on, radio off, needle dropping onto an album, the Rolling Stones' "Out of Time" remarking upon a passé film career—renders America's late-60s tensions between innocence and the apocalyptic, between bubblegum and acid. (This conflict is made explicit as Leonardo DiCaprio's Rick Dalton, cut off from the world via headphone as he lounges in his pool, grooves to the Royal Guardsman's silly "Snoopy vs. The Red Baron" as the bloody havoc goes down in his own house behind him.) The tunes—innocent, portentous, bland, and righteous—blend pleasurably into a day's long hazy afternoon leading to a night on The Strip or in the bedroom, roach in hand. Years later, we have an internal soundtrack to play that brings back those days.

Look at the Billboard Hot 100 for the first week of August, 1969. Layered onto the Tate reclamation are the songs themselves that, in the film's alternate timeline, are now going to score lives lived, rather than lives snuffed out. But this is fantasy. Elsewhere—a county away, states away, Vietnam—the horrors go on, and on. Sadly, there aren't enough movies to rewrite every ghastly act in the world. In a film full of foreboding and violence, some of the most startling moments were when radios were switched off: the silence that follows is the ugly world rushing back. 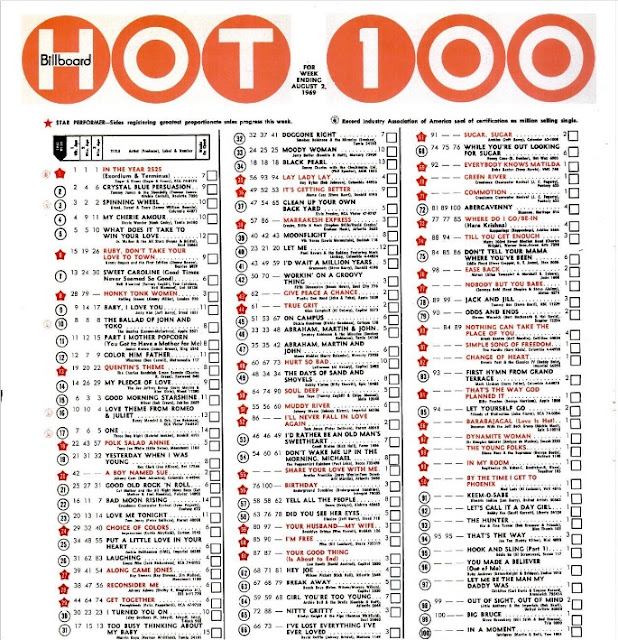