Recently in The Boston Globe Stan Grossfeld wrote a piece lamenting the vanishing of baseball pickup games. He points his finger at the usual suspects—the video game explosion of the last decades, the growing waves of helicopter parents—but also at the tragic death of 6-year-old Adam Walsh in the summer of 1981, which Tom Farrey, executive director of the Aspen Institute's Sports & Society Program, observes “set off this wave of parental panic in which it was no longer considered good parenting if you didn't know where your child was or who was watching your child 24/7." Walsh was abducted in Hollywood, Florida, and local police issued a photo of him smiling happily in his baseball uniform holding his bat. (Walsh's father, John, later hosted America’s Most Wanted.) Grossfeld also cites the rise of travel teams, highly organized and sophisticated groups of tiered squads that honed changes on the playing field that "offered a new world of opportunities," Farery remarks. "Those that played travel ball received better instruction, new challenges, bonding experiences, and lessons in team building and sportsmanship." He adds, "The cons, however, included significant costs, huge time commitments, and too much parental control."

I'm loathe to add even one more weeping voice to the choir grieving the diminishment of baseball's prominence in American youth culture, but after reading Grossfeld's article I was reminded that I haven't seen a game of ball played on the ramshackle field at the park around the corner from me in years. Wither the pickup game? About a decade ago a family moved in across the street from us. The kids—two small girls and two older boys—played on the street until dusk fell, the girls doing cartwheels until they were silhouetted against the oncoming dark, the boys throwing footballs and hanging out on their bikes. Serious Americana, folks. The local ice cream truck even re-materialized, making its sing-song rounds on our block. On long summer days our neighbors would occasionally round up some more kids, cross the street to the meadow behind our house, and play a pickup baseball game or two. I could watch them play from my back deck.

That family moved to a suburban town closer to Chicago years ago. The city of DeKalb has recently embarked upon a project to let that meadow, and a couple of others nearby, go wild; the field behind our house has been designated an official Monarch butterfly way station, and the profusion of wild flowers is gorgeous, and welcome. I'm super grateful to the town for spearheading this conservation movement, but just this morning was reminded of what's been lost. Walking the perimeter of the meadow I looked down and noticed a rock, long embedded in the ground, that the neighborhood kids used to use as "home plate." The meadow's wild sprawl has taken the entire infield and outfield with it. I've got my own gone-to-seed baseball field behind me now, which if I squint could act as yet another metaphor for the perception of baseball's cultural irrelevance. But I'll resist that. It's a sweet meadow. There are kids playing something somewhere. There always will be. 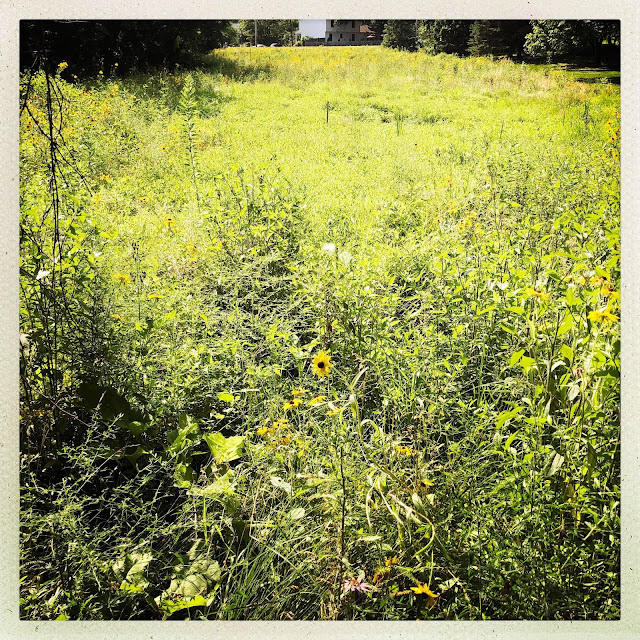