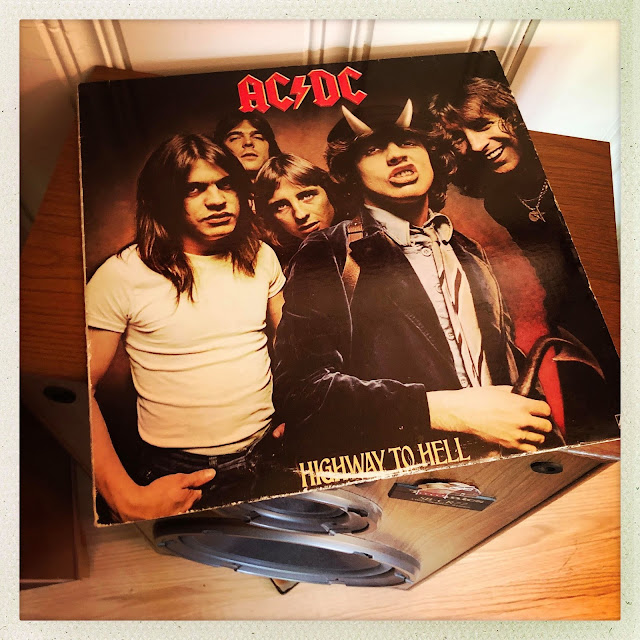 Let There Be Rock (1977) and Powerage (1978) may be rawer, Back In Black (1980) and For Those About To Rock (1981) the mega-blockbusters, but Highway To Hell will always be the quintessential AC/DC album to me. Released forty years ago today, the record married Malcolm and Angus Young's massive riffs and Bon Scott's cheeky ribaldry with Robert "Mutt" Lange's polished but noisy production. The result was a ten-song masterpiece, a loud, boozy, grins-filled party ranging from the epic and eternal title track and its followup, the perpetual motion machine "Girls Got Rhythm," to the cartoonish-scary close of "Night Prowler," the somberness of which Bon couldn't help but send up with his album-closing nod to Mork of Mork and Mindy fame. In between are studies in stirring riffology ("Beating Around the Bush"; "If You Want Blood"), a tale of striking out at the bar ("Shot Down In Flames"), and "Touch Too Much" which contains my favorite Bon line (and there are many), a girl described as having "the face of an angel" and the "body of Venus—with arms." Bon died within six months of the album's release, forever casting the album in shades of darkness, a sonic warning against excessive partying. Bon used to joke, in answer to the question of whether he was the "AC" or the "DC," that he was the lightning bolt down the middle. As Bon's swan song, Highway To Hell is a perfect summation of the singer's appeal: it's smart but ironic, fun and funny, attuned to Bon's twin poles of menace and laughter. AC/DC took itself too seriously, even after its worldwide successes, but when Bon died so did a particular strand of unique, winking humor in the band's songs.

Happy Birthday, Highway To Hell. Here's what I wrote about the title track in my 33 1/3 book on the album:


Three halting, growling chords issue menacingly from the right channel. There's faint reverb, the guitarist muffling the strings with the edge of his picking hand. It's a deceptively simple progression that anyone can master, witness the hundreds of tutorials from garages and teenage bedrooms to cover-band rehearsals and YouTube. The sound, from a familiar solid-body Gibson SG, is snarling but controlled, loose though coiled tightly. It's somehow both nasty and inviting. It’s all you hear for the opening few moments, and it's hard to place where the downbeat will come, though your head's rocking already. Ten seconds in and the drum lands, centered in the mix, and fat. Nothing fancy or virtuosic, just steady, dragging slightly behind the riff. If you've been following the band up to this point, you'll notice that the snare and hi-hat are much crisper, and mixed higher. The snare virtually rings, and the kick drum, playing off the silences left open in the chords, pounds straight into your chest. You feel that you're in the room and, man, it sounds almost slick. Almost. Twenty seconds in and the stupidly simple four-on-the-floor groove is official and irresistible. Now the singer enters. He sounds wasted, he sounds like he's drooling a bit, he sounds funny, he sounds completely unique, and you know who it is. He's spitting out declarations of easy living and season tickets on one-way rides. He doesn't want to be asked anything or to be bothered by anyone, but he doesn't sound obnoxious or precious, he sounds, well, sincere. And damn appealing. A half-grin crawls onto his face and now on to yours, and it’s there for good.

Here's the kicker: it's party time, he's going down, and—as the guitar strikes a new chord and the rhythm guitar and bass join in confidently on the left and the middle—his friends are gonna be there, too. You’re gonna be there, too, if the singer has anything to do with it.

Invitation in hand, surrendered to the simple overwhelming groove, you anticipate the chorus before it comes, but love the grinding, noisily-ascending trip to it anyway, and crash now you really hear something new if you've been a fan of the band, hear what millions of others around the world, some of whom had been only casual fans of the band or of rock & roll, will hear: an effortless, head-rocking, arms-elevated, smile-lifting chorus so appealing and fun and full of filthy guarantees, and so layered with harmonized, gang-bellowed vocals that you feel surrounded at a smoky party. You're yelling along about riding the highway and maybe shaking your head at the silliness of the words but beaming at the huge, answering riffs, and before you know it the thing coyly suspends for a moment before the second verse kicks in with the same dynamics, only this time you've rubbed your eyes and see where you are. And if you’re worried—I shouldn't be here, I feel kinda guilty for being here, there's a lot of open bottles and girls and I'm gonna get in trouble but these are the guys who made the pretty convincing argument that hell’s got a rocking band while heaven is stuck with harps—that's good, the song's promises are a little scary and the singer, even behind his grin, is a little scary and he should be. But the beat is so impossibly cool. You're in. Just have fun. The title track to Highway to Hell is not only an AC/DC classic and in many ways their signature song, it's about as perfect as a rock & roll song gets. In three and a half minutes, AC/DC manages to translate Dionysian excess, the lure of naughty behavior, and the promises made by twin-guitar riffing across all languages and culture. The peak fever of the band's combustible sum, "Highway to Hell' has become a touchstone for many, from besotted fans to worried evangelicals, dyed-in-the-wool hard rockers to indie hipsters who can grin and ironically head-bang their way through the song's fun inanity.

Not that Malcolm, Angus, Phil, Cliff and Bon were aware of this at the time—they were just going to work under immense pressure, reviving that "dog's balls" riff from the sessions with [early producer Eddie] Kramer. By the second verse, those riffs, played by the Young brothers in big, trouble-free, open chords, have become indelible. "It's the sound quality of open chords that's the thing," Angus explained in Guitar World. "They're big-sounding buggers, and they ring for ages, if you want them to." Sandwiched between the final hollered choruses is Angus's solo, another great chapter in his churning, blues-based style (quite possibly the best solo that Keith Richards never played)—a grooving lick that makes the lift into the final chorus palpably inevitable.

And here, the band, maybe at Lange's prompting, does something interesting: in between the bars of the chorus they halt their playing for a couple of seconds as Angus runs his pick up and down the strings in a maniacal screech—the audio equivalent of the party's funniest, over-the-top moment, the one that we’ll all laugh about tomorrow through our hangovers, though we'll barely remember it. Critic Steve Huey describes this "wild freak-out pick-slide down the strings" as “nothing so much as Bon Scott's insanity being let loose upon the world." Mad and wild as Scott's vocal is, he manages to get it together in the closing moments, the brothers sustaining their chords as Angus, the dervish in the middle channel, picks impatiently. Scott slows down and asserts passionately that he’s going all the way down (did we doubt him?) as the band builds up the chord in deafening volume and Rudd creates an ear-splitting storm on his ride cymbals. And then it all slams shut.

... For their part, the guys have long claimed that the lyrics to "Highway to Hell" originated in Angus's weary observation that riding around for years in a tour bus with the singer's reeking feet in your face is nothing short of a highway to hell. Locker-room humor, no evil spirits around. My favorite origin story is this: near where Bon Scott was living, in Fremantle, Australia, was a favorite pub of his, The Raffles. To get there, he had to take the Canning Highway. As the pub approaches, the road dips into an infamously steep decline; allegedly, scores of people died at the intersection near the bottom of the hill, and its descent into mayhem became known luridly as "the Highway to Hell." Bon loved the joke and the joint, and when the band was off of the long road and out of the studio he flew down that hill to drink and carouse at the Raffles regularly with like-minded folk. He always managed to avoid tragedy, but what a ride it must've been, drunk and high and zooming down the Australian night. Duly inspired, likely shaking his head at yet another near-miss, Bon channeled no stop signs and no speed limit, the daring spin of the steering wheel, the happy memory of his friends gathered at the pub after he'd survived the journey. Virtually a night out with AC/DC at your favorite bar, "Highway to Hell" is also one of rock & roll's great driving songs.