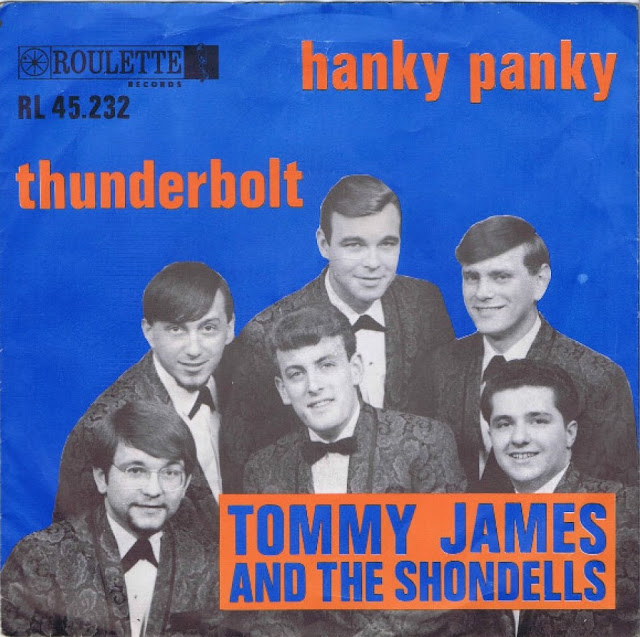 I'm late to Tommy James's compulsively readable memoir Me, the Mob, and the Music, co written with Martin Fitzpatrick (published in 2010 and recently optioned for a film version). Packed with insane, hilarious, and ultimately unsettling stories about  Roulette Records' da capo Morris Levy and his extended "family" of Mob associates, the book charts James's adolescence in the Midwest and his alarmingly rapid ascension as a New York City-feted chart-topping superstar. Even though I grew up with their songs on the oldies stations, I'd never fully realized just how big James and the Shondells were. Though some of his boasts of gold record after gold record smack of exaggeration, he was truly a superstar, aided and abetted by Levy who, in exchange for a strangling, rip-off, lifer-type contract, strong-armed James' records onto the radio, and gave him pretty much free rein in the studio and in booking his own tours. James's star shone very brightly in the late 1960s and early 70s. 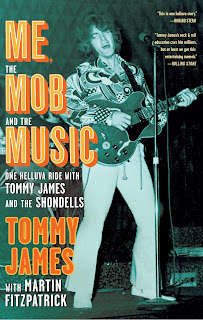 Yet as I've written here, here, and here, I've come to find the "fame and fortune" passages in rock star memoirs and biographies dull and uninteresting; how many times do I need to read about endless tours, growing amp stacks, groupies, alcohol and drug abuse, and all manner of excess on the road and in personal lives? (And James joins the disturbingly long line of rock stars who became obsessed with firearms and shooting guns randomly out of apartment windows. Yikes.) His trajectory from Nowhere to Everywhere on a jet stream of amphetamines, payola, and self-mythologizing ends predictably: he hits bottom, finds The Lord, and marries well—and in a rare and welcome development, finally gets paid the millions that are owed him.

I'm happy for James in this regard, and yet I'm more interested in reading about his early, hungry years. One story in particular  captures the uncanny blend of happenstance, ambition, and nerve that seems to be crucial for rock and pop stars at the dawn of their careers. In 1964 James' band was in its infancy. He was banging around in his hometown of Niles, Michigan and one afternoon dropped into a local joint, Shula's, to catch his friends' band the Spinners. One of the songs they played, unfamiliar to James, got a tremendous reaction from the crowd. In between sets, James asked the Spinners' drummer about the tune, called "Hanky Panky." It turns out that they didn't know much about the song, either; they'd heard another band play it a few weeks earlier, duly noted the crowd loving it, and decided to add it to their set. As James remembers, the Spinners "could not find a copy of the record so they were really playing whatever bits and pieces they could remember."


During the next set, over the PA system, I could hear people requesting this song over and over. The requests were coming mainly from the girls, which was always a good sign. The Spinners played “Hanky Panky” twice more that afternoon and each time the reaction was the same. The crowd went wild. Everybody hit the dance floor and sang along. I remember thinking what an unusual response this was from a normally low-key, Sunday-afternoon crowd. It was more like the reaction you would expect from a good party crowd on a Saturday night.

The next day James headed to Spin-It, the Niles record store where he worked, and asked a fellow employee, "Dr. John" (the joint's "resident musicologist") if he knew the tune.

“No, who’s it by?” “I have no idea.” The doctor got out his huge, thirty-pound retailers’ guide, which listed virtually every record ever made, and looked it up. It turned out to be the ﬂip side of a record called “That Boy John” by the Raindrops on Jubilee Records. We found it had been released the previous fall but was almost immediately pulled off the market after the Kennedy assassination because the John in the title was JFK. (I found out later that the Raindrops were really the great Brill Building songwriting team of Jeff Barry and Ellie Greenwich.) In essence, it was the B side of a record nobody ever heard. Well, almost nobody. The Spinners had sure heard of it and so had the group who did it originally. I really felt we had to move fast.

At band rehearsal the next night, James and his band tried to learn "Hanky Panky." They were "as much in the dark as the Spinners as to what the words really were," James recalls, adding, "All I could remember was: 'My baby does the hanky panky.' We were actually doing an imitation of the Spinners' imitation, and who knew how far the chain stretched? Since we needed more lyrics than that, [guitarist Larry] Coverdale and I made up some disposable mumblings that passed for a second verse." I immoderately love that phrase "disposable mumblings," which is a hell of a euphemism for rock and roll. The band worked the song into shape, played it at every gig, and eventually went into the studio in the fall of '64 to record it. "All we had to do was get it down on tape and the rest would take care of itself," James writes. They did. And it did.

I'm enamored with the idea of an eternal rock and roll song born out of an ear worm and the stubborn insistence of a teenager not to forget it. In the pre-digital era, that retailer's book (I remember paging through it in record stores through the 1980s) was among the only links between songs and bands beyond drunken oral histories in dark clubs and bars, or a snippet of a tune caught on the transistor radio and then tantalizingly slipping away. James couldn't Shazam the song or search online for it. He did what he had to do, part of a long tradition, spanning centuries from fields to street corners, of song passed from one singer to another in the air above their heads: ask questions, imitate an imitation, busk the rest, and call it his own.

Me, the Mob, and the Music also has a line that's vaulted to the top of my favorite lines in rock memoirs (this week, anyway). James and his fellow songwriters Ritchie Cordell and Bo Gentry are in Allegro Studios in a basement on Broadway in Manhattan, working on an early draft of what will become one of James and the Shondells' great hits, "I Think We're Alone Now." Gentry sits at a Baldwin grand piano, Cordell behind a drum set, while James is playing a Fender Jazzmaster through an Ampeg Gemini II amp. The boys are recording in stereo for the first time, separated by acoustic baffling, surrounded by cutting-edge high-tech gear.

James remembers: "I was not sure if the three of together could play more than a dozen chords but we sure looked cool." Exactly.