"One of the best" 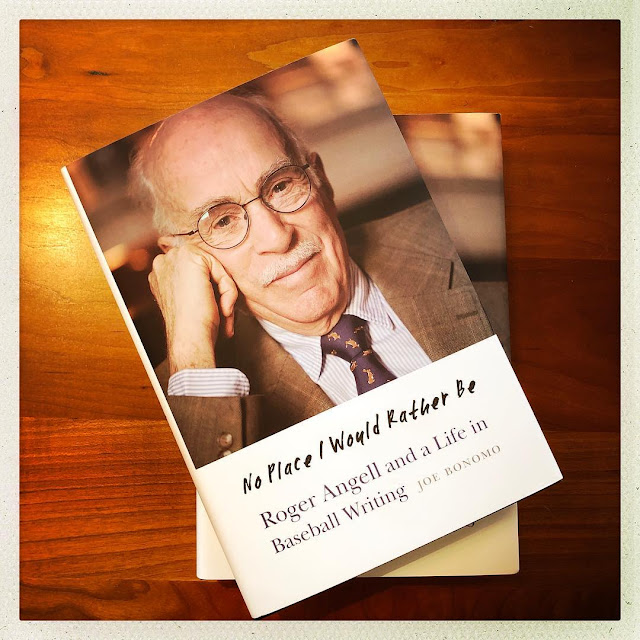 The season's heating up, and my book about baseball's greatest living writer No Place I Would Rather Be: Roger Angell and a Life in Baseball Writing is out now. Some reviewers have recently weighed in:


Of the recent books I have read about baseball, Joe Bonomo’s book chronicling the career of Roger Angell, No Place I Would Rather Be, is one of the best, not only for Bonomo’s considerable writing skills, but also for his compelling portrayal of Angell’s erudition and unique focus on the “lesser and sweeter moments” of the sport he loves, Jill Brennan O'Brien, America

The author of several books about rock music, Bonomo has written a well-sourced and intelligent portrait of the erudite but unpretentious Angell. Carefully assessing his subject’s copious output, Bonomo quotes his best pieces at length and draws on Angell’s archive of notes and early drafts for context. His analysis is bolstered by his interviews with Tina Brown, David Remnick, Janet Malcolm, and other boldface names who have worked alongside Angell. The result is a gratifying quasi-biography of a superb prose stylist who came of age in an era of thick, general-interest magazines, a successful writer of fiction who found, as the years passed, that he preferred to focus on baseball, Kevin Canfield, Los Angeles Review of Books

Bonomo moves more or less chronologically through Angell’s career, examining the changes in his interests and the evolution of his writing, while using Angell’s life as part of the backdrop rather than placing it in the foreground. Bonomo quotes liberally from Angell’s work and, for those who are familiar with the baseball columns, these passages will evoke many fond memories. For those not familiar with Angell’s work it, should produce an urgent desire to read more. In addition, Bonomo offers guidance to Angell’s lesser known work especially from his early career and for his work beyond the pages of the New Yorker and away from the world of baseball, Richard Crepeau, New York Journal of Books

You can buy the book at Amazon, Indiebound, or directly from University of Nebraska Press.
Posted by Joe Bonomo at 10:02 PM

Email ThisBlogThis!Share to TwitterShare to FacebookShare to Pinterest
Labels: book, books, no place i would rather be, review, reviews, Roger Angell