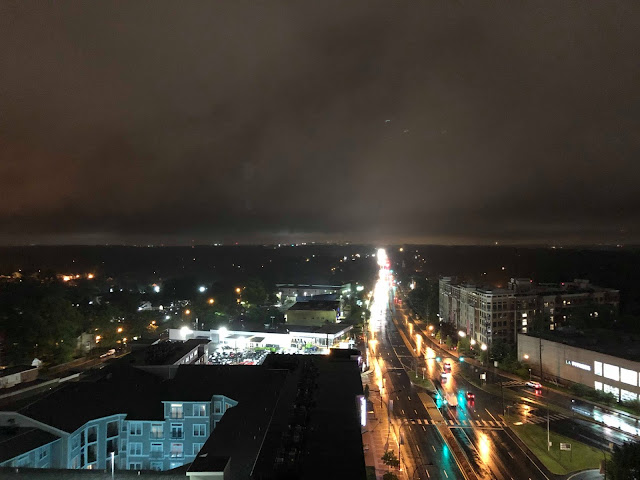 I recently visited my parents and three of my siblings in Maryland. For fun, Amy and I decided to Airbnb an apartment in a building in Wheaton less than a mile from the house where I was raised. The place features a top-floor open-air terrace with a social gathering area (flat screen TVs, a bar, lounge chairs, etc) and one night we headed up. I was astonished to realize that my vantage point (above) looking south down Georgia Avenue toward Silver Spring, and, beyond, Washington D.C., would have been impossible when I lived there in the 1960's, '70s, and '80s without me being in a helicopter (improbable) or in bed at three in the morning, dreaming of flying over town (likely). These kinds of epiphanies are startling and melancholic, a graphic indicator of the changes in our old hometowns, equal parts banal and urgent. No real news here, and yet you're forever altered with the reckoning. At one point I realized that our building—one of a clutch of new mid- and high-rise apartments that in the last couple of decades have sprung up in once lower- and middle-class, quiet Wheaton—stood at the precise spot where the Country Boy Market had been in operation since 1955, a leaning, ramshackle fruit-meat-produce joint that you can only find in small rural towns now. Wooden, low-slung, red-painted, the store contributed to the strangely bucolic feel that parts of Wheaton had when I was a kid. Wheaton is only ten miles north of the D.C. line but in the 1970s if you looked in the right places, it felt and looked like a small town. My friends and I often stood in front of Country Boy on Friday and Saturday nights looking for a generous soul who'd buy us beer so we could head into the woods near our high school and get drunk before football games.

Those woods, that school, all gone now. Country Boy itself eventually moved to a spiffy location one 'hood north in Glenmont, where on our way out of Maryland Amy and stopped to pick up some Schaefer Beer, which I still love as much as when I drank six-packs in those woods last century. The stuff's getting scarce: someone had cleaned out the stock at Elbe's, my usual source in Wheaton, a rare longstanding joint still in business—intel directed me to Country Boy, which I hadn't even known existed anymore. The owner there told us that a shipment was coming in the next day and, offering his card, asked us to give him a call on his cell when the place opened. At 8 in the morning the following day I waited on a loading dock as a couple workers unearthed a case of Schaefer for me from the delivery truck. I grabbed the beer gratefully and it was some measure of solace, a gentle head nod to a barely-visible past. We climbed into the car and headed west via the sparkling, controversial Maryland Route 200, an intercounty connector finished in 2011 after homes had been removed and environments disrupted. Viva, eminent domain. Viva, the future. 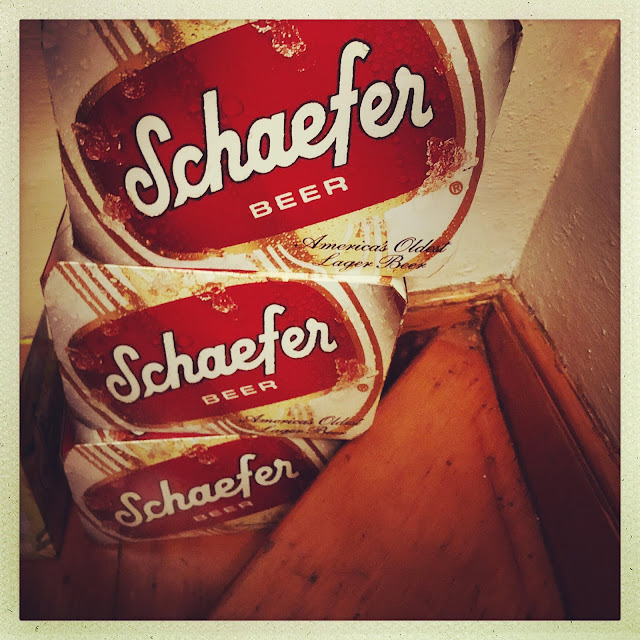