Here's to a Life Sentence 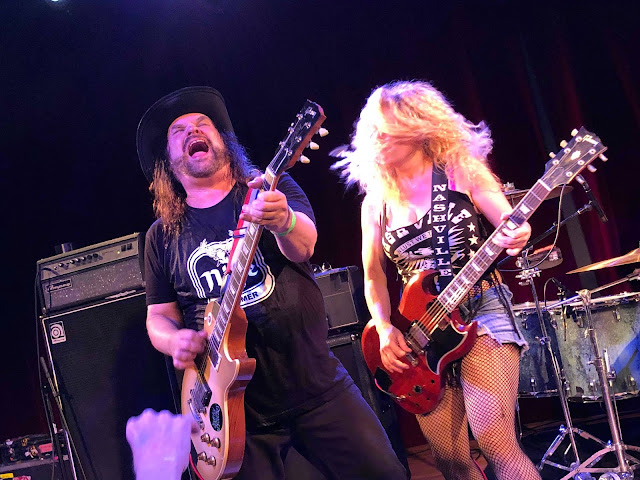 DOWN AT THE ROCK & ROLL CLUB—Some nights you want to rock out. Others you want to see how much damage was done to the foundations and support beams.

After surviving another endurance test last night from Guitar Wolf at Brauer House—the Japanese trio's abrasive, non-stop assault generally presses re-set on any evening, and how the night goes for you afterward depends on how close you were to the flying shrapnel—I noticed through the post-set smoke the Easybeats' "Good Times"  playing over the PA. And then Ike and Tina Turner's "Contact High" and "Funky Mule." Then the Sonics' "I Don't Need No Doctor" and "Be a Woman." Then the Ramones' "Main Man" and "Too Tough To Die." I began to revive. The playlist came via Nashville Pussy, and their sterling choice of rockin' songs cleansed my body of the post-Guitar Wolf radiation, and set the evening down a road of good times.

Nashville Pussy's touring behind their latest album Pleased To Eat You, but the show is vintage. They're sporting a terrific new drummer (Ben Thomas) and bass player (Bonnie Buitrago) since the last time I saw them, and Blaine Cartwright and the unstoppable Ruyter Suys anchor things with their road-tested, high-octane firepower. You know what you're going to get with Nashville Pussy, and that's part of the fun of seeing them and playing their records loudly: they don't disappoint because they know that what they do they do really well, and that it scratches the collective incurable itch of their fans. Last night's crowd felt somewhat sparse in the cavernous Brauer House, but they were amped, fists aloft and throats sore from exhorting. The reason I keep coming back to the band isn't only that I'm a recovering eighth-note addict and that they deliver live—Cartwright's worn-to-a-shed vocals and Suys' thrilling Gibson guitar shredding—but because many of their songs topical and smart, and always funny. Cartwright was asked recently whether he thinks that his lyrical blend of "raunch and humor" might have prevented his band from achieving greater commercial success. "Probably," he answered. "But I have to entertain myself; if others like it, that’s a bonus. It’s obviously more important to make my band mates laugh than get on the radio. And that takes a lot." Cheers. I'll toast that with PBR in my cowboy hat (see below). 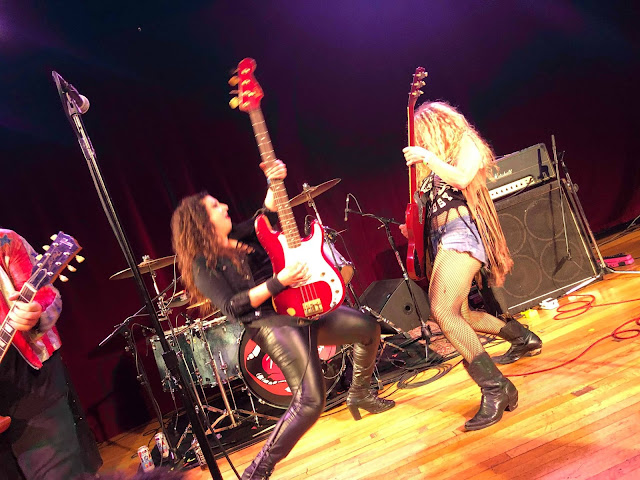 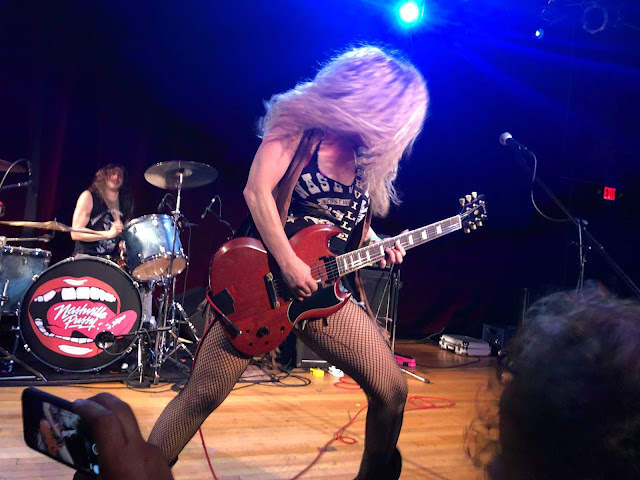 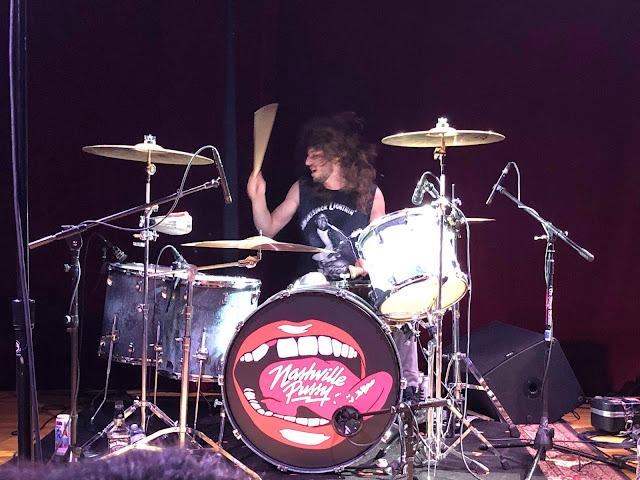 The new songs—"Go Home and Die," "She Keeps Me Coming and I Keep Going Back," and "We Want a War," among them—dovetailed nicely with the band's classics "Go to Hell," "Rub It to Death," "Pussy Time," and "Go Motherfucker Go." Dirty, sleazy, indecorous: the band makes no apologies, grins with just enough irony to let us know they take this stuff seriously after all, and sets it all ablaze in righteous riffs, hooks, and yell-along choruses. Their influences are ace, too, starting with that killer playlist before they hit the stage and running throughout some great covers in the set, the Contours' "First I Look at the Purse," the (early) Parliament's "(I Wanna) Testify"—Cartwright wouldn't proceed until we gave Dr. Funkenstein a heartier cheer—and an honest, improbably affecting take on Steve Earle's "CCKMP." Thomas wore a Smokestack Lightning t shirt and Cartwright a Nine Pound Hammer t-shirt; I refrained from yelling out a request for his early/on-again-off-again band's tear through Sam The Sham and the Pharaohs' "Oh That's Good, No That's Bad." Now I regret it.

"Live is always more unpredictable and crazy," Cartwright said. "You gotta make rock n’ roll a bit dangerous or what’s the point?" He adds, "Live, we never stop screaming. It helps to not give a shit about the real world. Totally abandon all the crap that crosses your path and fills your mind. It’s all crap compared to the music."

A side note: for me the coolest moment last night came when Cartwright stepped to the mic and gave a shout out to my book AC/DC's Highway To Hell, in particular my passage about when you see Nashville Pussy that's about the closest you’ll get to seeing '70s prime AC/DC. I met the band for the first time and hung with them and their fans backstage, where everyone smoked and where Suys was gracious enough to ask if Cartwright had pronounced my name right (he hadn't, I'm used to it) and where I sipped from her Jack Daniels bottle and heard stories of the band sneaking in underage fans to theirs shows; one of those fans is now the band's bass player. Alas, Cartwright was otherwise occupied after the gig or we could've gotten in some good baseball talk, too. He and Suys are Rock and Roll lifers. I love 'em for that. 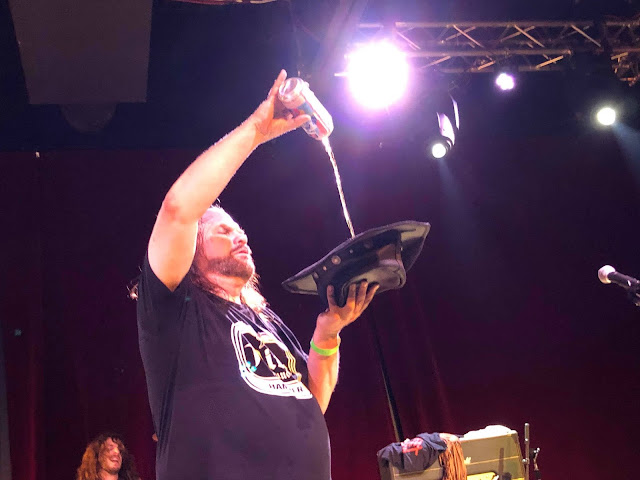 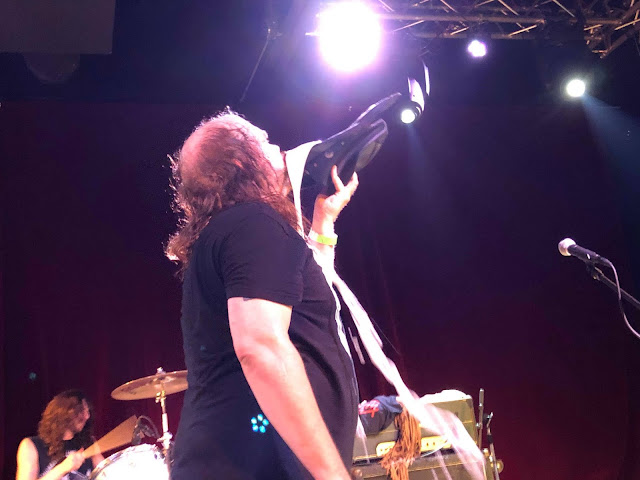 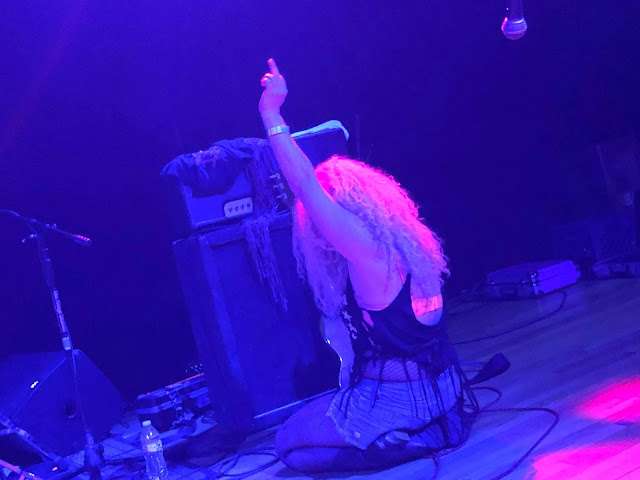