Everything's ahead of us 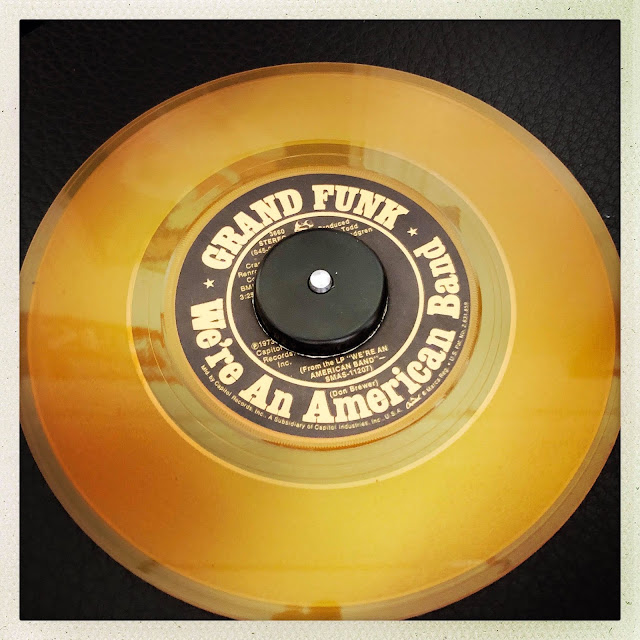 On the same day when Chris Estey asked on Facebook for votes for the Top Ten cowbells in rock and roll, and the inevitable shouts for Grand Funk's "We're American Band" went up, Tom Breihan at Stereogum posted about the song. Now that's some funky coincidence. I happen to be reading Billy James's 1999 hagiography An American Band: The Story of Grand Funk Railroad now, too, so here's to serendipity.

Breihan nails the song's appeal well—it's a mildly embellished tour diary, rhymed and set to music. I'll add that my two favorite moments in the song—which I love immoderately, and which may be a perfect rock and roll song—have nothing to do with the lyrics or playing, but with expectations. After drummer Don Brewer sings the first verse, the story unspooling, the band settles back into the killer groove with which the song opened. On first listen, you know a second verse is coming and it was like waiting (back when we waited) for next week's episode of your favorite show, or putting down a great read knowing that you'll pick it up again and open it later that night. I can't wait for the next chapter! Similarly, during Mark Farner's eight-bar guitar solo after the second gangsingalong of the epic chorus, you have a feeling that that chorus is coming back; on later listens, you know it's coming back. Few moments in rock and roll from that era still fill me with the same heady joy, the sweet spot, the song's equivalent to the moments between drinks two and three, say, the night still young, the chorus coming 'round again. Everything's ahead of us. Party it down!

I'm grinning writing this. It doesn't hurt that the song is perfectly produced by Todd Rundgren: instincts to jam endlessly are squashed; Craig Frost's eighth-note organ stabs maintain the excitement simply but urgently; the chorus is repeated an ideal number of times, not too few, not too many. The song's greatness lies in the way I'm always brought me back to the first times I heard it.