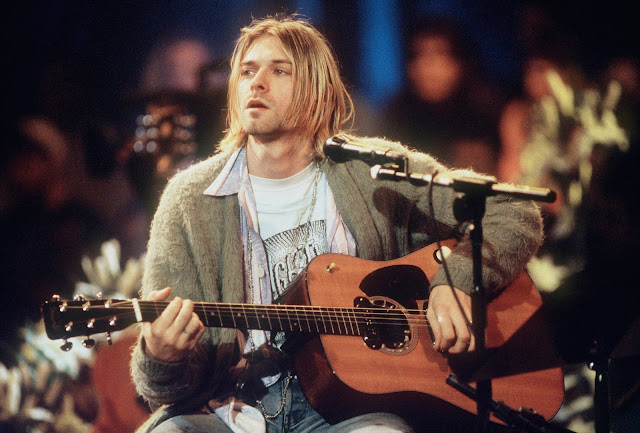 Kurt Cobain died 25 years ago today. I remember sitting in a lousy Pizza Hut in Athens, Ohio sometime in 1992. Nevermind was out, and huge and getting bigger. Amy and I were eating when "Smells Like Teen Spirit" came on. At the end of the song, to which we were paying only minimal attention, a denial, a denial, a denial, a denial roared through the place, cutting through everyone's meal, personal space, and sense of decorum, or peace, and it felt like nothing else than a demand to reevaluate things. That simple, and that profound. As what happens when encountering great art, the environment had been altered, and I'd been unprepared.

A year or so earlier, as I wrote in Field Recordings from the Inside, my neighbor on First Street and some friends of hers were out on her front porch.

I walk past and hear a song coming from their house that I’ve never heard before, and can’t place. In the few moments it takes to reach my front steps the music seems to have moved from sweet to ferocious to anthemic to desolate and back again. The singer’s great. The riffs are loud, but clean. “Who is that?” I yell from the street.

She smiles beatifically at me. “It’s Nirvana!”

When Nevermind was released in the fall of 1991 I was only vaguely aware of Kurt Cobain’s band. I’d looked the other way when their early Sub Pop records were issued, as I hadn’t been ready yet for their tuneful howl. What I heard my neighbor say was “nirvana” with a lower-case “n.” In the way we instantaneously make sense of a complex moment and its scope, it felt like what she had described for me was a feeling, a place, made of roar and stillness, to where she’d been transported, a spiritual instant. Not much later, when Nirvana took off commercially, I made the critical appellative correction, but the influential exchange on the street had imprinted itself in me. That was less music I heard walking by her porch on an ordinary sunny day in autumn than a state of being.