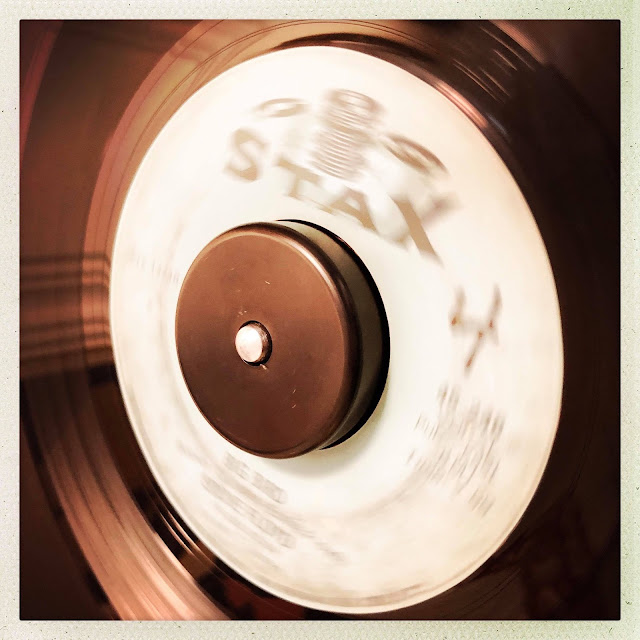 Fingerprints, scuffs, pen marks, dust, smudges, proof of people living. That's what I love about vinyl, the virtual conversations taking place among scratchy, sleeveless 45s in some shitty cardboard box on the floor of a record or antique store, the ghosts of chatty, previous owners I sift through. I found this brilliant Eddie Floyd single from 1968—an all-time fave—in a cramped box in a store in Rockford, Illinois for a couple of bucks. It looked worn as hell but, like an old house or used paperback or dirt road, that's what drew me to it. Nothing a Spin Clean couldn't help, anyway, which did in fact brighten the highs and deepen the lows of this beauty, written by Floyd with Booker T. Jones, who produced it for Stax. Those pops and clicks in the opening: the sound the ground makes under your feet on the approach to your grandma's or your new girlfriend's; that creak in the front door of the beach house you stayed in that summer when you.... The number 4 written on the label? I have no idea, but I could come up with about ten imagined storylines to explain it.

With perspective, I gotta say that I don't find such tactile sense memories among my CDs (which are now boxed away down in my basement), even the ones I first bought back in the late 1980s. I dropped loads of money on CDs for several decades, bought into the overwhelmingly present argument that 1s and 0s paved the virtual road to the future, that there was no looking back. Yeah the shelf of mix tapes I made, swapping with friends and wooing my girlfriend, tell lots of stories, but plastic only bends so far before it snaps. Fingerprints on a CD case, the robot-like error when a damaged disc plays: these seem to lack the depth and the sponginess of vinyl and of album covers and 45 sleeves, softened with the years and the touch of hands. Now I regret that I pressed pause on buying vinyl for so long, though I never truly stopped.

This is generational, I know. I still listen to half of my music via Spotify anyway, and the CDs from your high school years sure tell their stories. When you come across a stack of chipped cases in twenty years, or notice the obscure handwriting on some random CD-r, you'll enter the past and its richness and mystery they way I do when flipping through vinyl, at a store and at home. And so it goes.

The Jam have an awesome cover of this on their 1982 live compilation...

Yes, indeed. That's where I first heard it!