Gotta tell me why 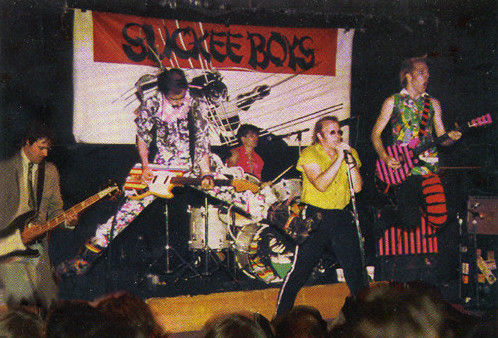 It's too much to go into, but Amy and I have been hate-watching Gilmore Girls for a while. In an episode from the fifth season, the character Zack Van Gerbig, a scruffy "rocker" who plays in a local band, scoffs at his girlfriend and fellow bandmate Lane Kim when she suggests that their band try and improve on some recent promo photographs.

Happy with the ones that they have, Van Gerbig dismisses the idea. "We're not Maroon Five or The 'gee whiz' Slickee Boys," he says.

WTF. Now, Gilmore Girls was a show that prided itself, often way too cutely, on its pop culture references, and the character of Lane, in particular, was an energetic fount of favorite bands and musicians, most of the earnestly cool/hip/alt variety. Yet no band name-checked on the show was nearly as surprising as The Slickee Boys, an indie-label garage-psych band out of the Washington D.C. area who never broke into the mainstream. (Having grown up in suburban D.C., they're a longtime fave of mine.) I don't know how they ended up on the lips of a pretty-boy rocker in an episode of a dramedy that aired in February 2005, a decade and a half after the marginally-known Slickees called it a day (save for many reunion gigs). Preliminary Internet research has turned up nothing but the episode's Wikia page (scroll down to "Pop Culture"), deepening the mystery. Was a show writer a fan? Did the writing staff pick the band name out of an old issue of Trouser Press? You gotta tell me why.

Photo (cropped) of Slickee Boys via discogs.
Posted by Joe Bonomo at 6:03 PM

Hey d.c.punks rule! So why not? I love that they were mentioned!!

It certainly was vey cool, and very strange!