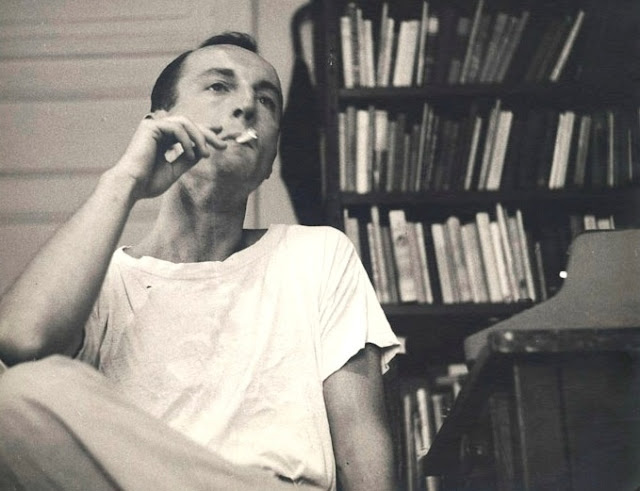 On Frank O'Hara's birthday I'm remembering a poem of his I recited in my Introduction to Creative Writing course as an undergrad at the University of Maryland in the mid-1980s. My teacher was Brooks Haxton, who stayed on at Maryland for a maybe a year or two, eventually ending up at Syracuse, where he's taught since. (My abiding memories are Haxton's grinning and bug-eyed manic presence in the classroom, and the embarrassment I feel now when I remember walking across the college green with him once, demanding that Jack Kerouac's "first though best thought" is the only art dictum worth anything; he politely and no-doubt bemusedly let me go on and on.) The anthology Haxton chose was The Voice That Is Great Within Us, a by-now dated and unfashionable collection, but in the mid-1980s I prized it for its rawness and eclecticism. When tasked to choose a poem to recite, I gravitated to the dynamic cityscape in O'Hara's "A Step Away from Them," which first appeared in his Lunch Poems in 1964, indulging my obsession with all things Manhattan and recognizing a similar vibe in the cherished walks I'd take through Washington D.C.'s noisy and diverse neighborhoods on weekends (and days I blew off classes). Some of the phrases in the poem— "the hum-colored cabs," "dirty glistening torsos," "skirts...flipping above heels," "cats playing in sawdust," "Puerto Ricans on the avenue today, which makes it beautiful and warm"—have stayed with me vividly, like old friends or images I swear I've witnessed myself, so irresistible and lively is the language. It's a long-ish poem, and I was proud of myself for pulling off the recitation. That I'd memorized and delivered it before class is less a testament to the occasional discipline I could find as a distracted English major than to O'Hara's jazzy, street-drunk phrasing, which was easy to commit to memory because it felt like I story I'd already told myself, or imagined living. I barely understood the references, of course—to Edwin Denby, Giulietta Masina, John Latouche, Pierre Reverdy, et al—but that didn't matter, because they morphed into everyday pulsations in the knocked-out joy the speaker feels simply existing on this street in this moment. It's still a favorite, decades after I first encountered it. Happy birthday, Frank.

A Step Away from Them

It’s my lunch hour, so I go
for a walk among the hum-colored
cabs. First, down the sidewalk
where laborers feed their dirty
glistening torsos sandwiches
and Coca-Cola, with yellow helmets
on. They protect them from falling
bricks, I guess. Then onto the
avenue where skirts are flipping
above heels and blow up over
grates. The sun is hot, but the
cabs stir up the air. I look
at bargains in wristwatches. There
are cats playing in sawdust.
On
to Times Square, where the sign
blows smoke over my head, and higher
the waterfall pours lightly. A
Negro stands in a doorway with a
toothpick, languorously agitating.
A blonde chorus girl clicks: he
smiles and rubs his chin. Everything
suddenly honks: it is 12:40 of
a Thursday.
Neon in daylight is a
great pleasure, as Edwin Denby would
write, as are light bulbs in daylight.
I stop for a cheeseburger at JULIET’S
CORNER. Giulietta Masina, wife of
Federico Fellini, è bell’ attrice.
And chocolate malted. A lady in
foxes on such a day puts her poodle
in a cab.
There are several Puerto
Ricans on the avenue today, which
makes it beautiful and warm. First
Bunny died, then John Latouche,
then Jackson Pollock. But is the
earth as full as life was full, of them?
And one has eaten and one walks,
past the magazines with nudes
and the posters for BULLFIGHT and
the Manhattan Storage Warehouse,
which they’ll soon tear down. I
used to think they had the Armory
Show there.
A glass of papaya juice
and back to work. My heart is in my
pocket, it is Poems by Pierre Reverdy. 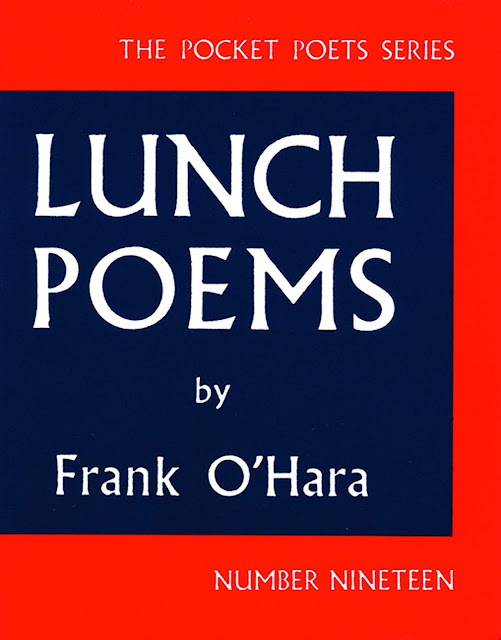