So far away, so near 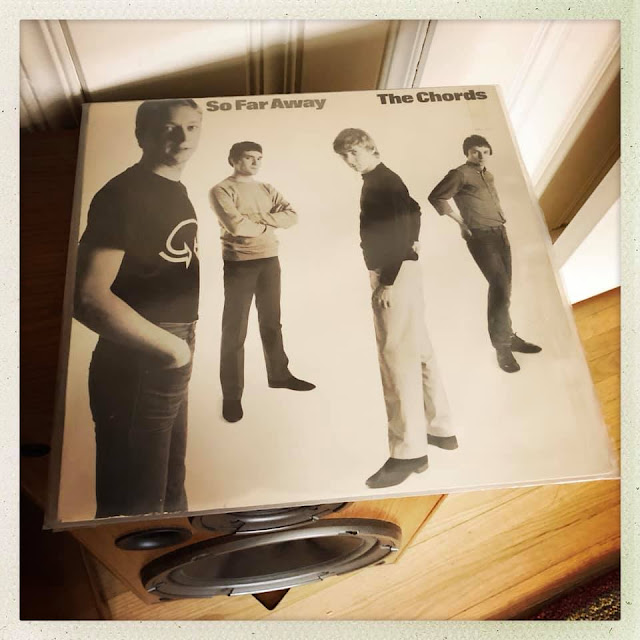 The Chords will forever be slotted in with the U.K. Mod Revival of the late-70s, early 80s, but the bulk of their songs—as in the best rock and roll—transcends any attempts to label or categorize. Formed in Southeast London in 1978, the band played often in their home country, including headlining two Mod festivals at the Marquee Club. They signed with Polydor records and released several singles—"Now It's Gone," "Maybe Tomorrow," "Something's Missing"—and one album, So Far Away. A handful of singles followed ("The British Way of Life," "In My Street," "One More Minute," "Turn Away Again") but by '81 the band was finished, as the Mod Revival receded and New Romantics and synths ushered the parkas and scooters on their way. (Chris Hunt wrote a terrific overview of the band here.)

The Chords have since reformed, and have issued a live album, some comps, and an EP, and So Far Away has stood the test of time, sounding fresh and relevant, with punchy sound courtesy of producer Andy Arthurs. In retrospect, these guys gave the Buzzcocks and the Jam a (brief) run for their money, in part because they didn't slavishly ape a Mod Look and didn't sing about Faces and pills and Bank Holiday riots, but mostly because their songs are urgent and passionately played. Billy Hassett was a fantastic singer, unique and excitable, and the band was tight and propulsive in the best coiled UK power pop/punk tradition. These three songs in particular demonstrate how a rock and roll band can both trade on and shake off a label, the driving Sam & Dave cover propelled by that clarion-call guitar lead, the gang-singing and key modulations in the title track sounding spontaneous yet inevitable, not pre-written. These songs lift above most of the Chords' peers' material out of sheer energy, tuneful desperation, and an eye above the horizon, traits that imbue most tunes with timeless appeal.

Chris Pope is the current singer and long time songsmith but the three songs here are sang by original Chords singer Billy Hassett.

Thanks for the correction! I'll make that edit.