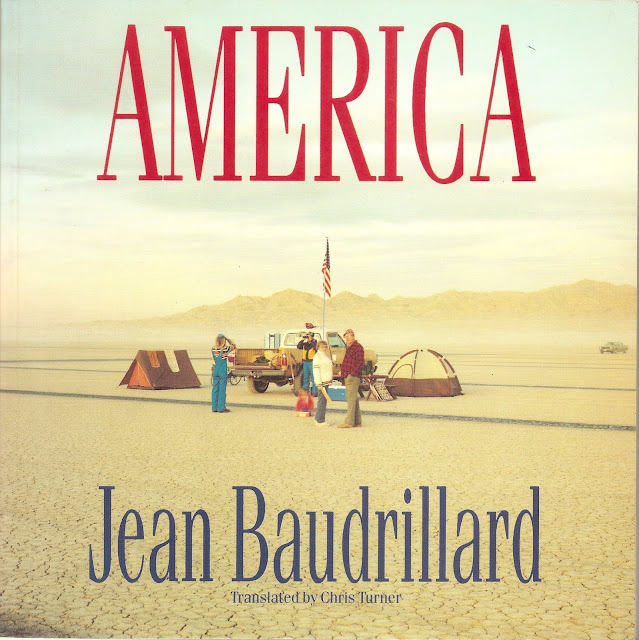 From Jean Baudrillard's "New York City," in America, published in 1986:


Such is the whirl of the city, so great its centrifugal force, that it would take superhuman strength to envisage living as a couple and sharing someone else’s life in New York. Only tribes, gangs, mafia families, secret societies, and perverse communities can survive, not couples. This is the anti-Ark. In the first Ark, the animals came in two by two to save the species from the great ﬂood. Here in this fabulous Ark, each one comes in alone—it's up to him or her each evening to find the last survivors for the last party.

In New York, the mad have been set free. Let out into the city, they are difficult to tell apart from the rest of the punks, junkies, addicts, winoes, or down-and-outs who inhabit it. It is difficult to see why a city as crazy as this one would keep its mad in the shadows, why it would withdraw from circulation specimens of a madness which has in fact, in its various forms, taken hold of the whole city.

’Breakdancing’ is a feat of acrobatic gymnastics. Only at the end do you realize it actually was dancing, when the dancer freezes into a lazy, languid pose (elbow on the ground, head nonchalantly resting in the palm of the hand, the pose you see on Etruscan tombs). The way they suddenly come to rest like this is reminiscent of Chinese opera. But the Chinese warrior comes to a halt at the height of the action in a heroic gesture, whereas the breakdancer stops at the slack point in his movements and the gesture is derisive. You might say that in curling up and spiralling around on the ground like this, they seem to be digging a hole for themselves within their own bodies, from which to stare out in the ironic, indolent pose of the dead.

Image of Chinatown, New York City via NY Through the Lens
Image of Cosmic Closet via Artspace
Image of break dancing via reddit
Posted by Joe Bonomo at 11:48 AM