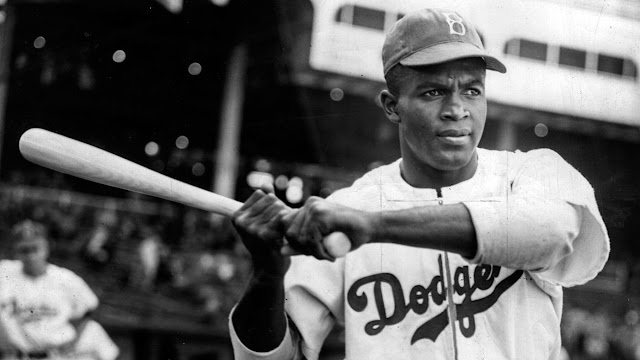 On the one hundredth anniversary of Jackie Robinson's birth, it's worth revisiting Roger Angell's unsettling 2013 memory of Robinson in a "mid-game moment at the Polo Grounds in June or July of 1948," the infielder's second year in the Major Leagues. Angell was at the Polo Grounds "sitting in a grandstand seat behind the third-base-side lower boxes, pretty close to the field, there as a Giants fan of long standing but not as yet a baseball writer."


Never mind the score or the pitchers; this was a trifling midseason meeting—if any Giants-Dodgers game could be called trifling—with stretches of empty seats in the oblong upper reaches of the stands. Robinson, a Dodger base runner, had reached third and was standing on the bag, not far from me, when he suddenly came apart. I don’t know what happened, what brought it on, but it must have been something ugly and far too familiar to him, another racial taunt—I didn’t hear it—that reached him from the stands and this time struck home.

The game stopped. The Dodgers’ third-base coach came over, and then the Giants’ third baseman—it must have been Sid Gordon—who talked to him quietly and consolingly. The third-base umpire walked in at last to join them, and put one hand on Robinson’s arm. The stands fell silent—what’s going on?—but the moment passed too quickly to require any kind of an explanation. The men parted, and Jackie took his lead off third while the Giants pitcher looked in for his sign. The game went on.

Angell can't remember who won or lost the game, but that image of a beleaguered, exhausted, pushed-to-the-limit Robinson on the field—an "infinitesimal mid-inning tableau"—remained with him for decades, "quickly resurfacing whenever I saw Jackie play again, in person or on TV . . . and then again on the day he died, in 1972."

He was fifty-three years old but already white-haired and frail. We all knew his story by heart, of course, and took a great American pride in him, the very first black player in the majors: a carefully selected twenty-eight-year-old college graduate and Army veteran primed and prepped in 1947 by Dodger President Branch Rickey, who exacted a promise from him that he would never respond, never complain, never talk back, no matter what taunts or trash came at him from enemy players out of the stands.

This small, nearly soundless moment that Angell witnessed was replayed over many games in Robinson's career, in far less hospitable places than upper Manhattan. An observer, Angell sees this but can only store it away, and then report, and reflect. Robinson was a remarkably courageous man.

Angell adds: "He did us proud, but at a cost beyond the paying."