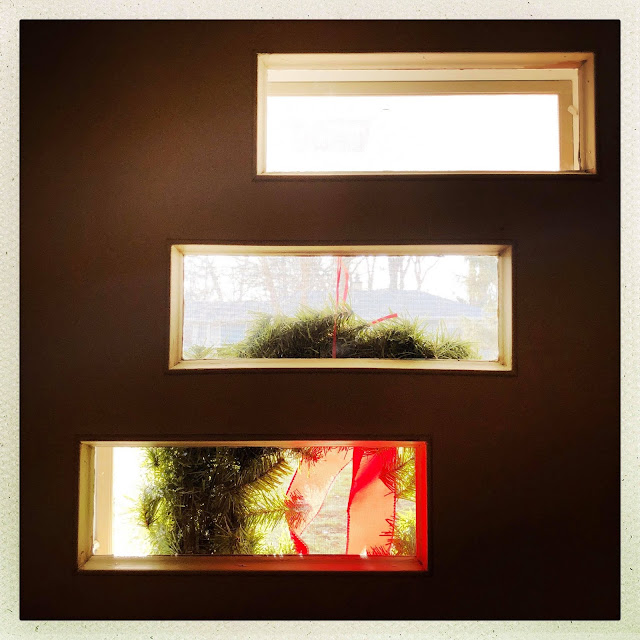 Laying low raises some questions about the meaning of home, how it's defined, and whether it's a place one visits or a place one carries abound inside. Probably some measure of both, I'd guess. This is the first Christmas/New Years in more than twenty years that we haven't driven east to visit my parents and siblings. We're staying put in DeKalb this year, alone yet not at all lonely, and, as much as I'll miss family and the growing racket of what I used to call home, I won't miss the three hours it took us to cross Indiana in a horizontal blizzard, the bedraggled hotels, the too-brief human connections, the stress. And the rest. What I'm trying to pay close attention to this year, quiet with Amy in our small town, are eternal rhythms, from cookie making and tree decorating to the otherworldly quiet of the yard at night and, today, on Christmas morning, of the neighborhood itself where in homes all over, many families are enacting what still feels absurdly joyous and close to me. But during this season it's especially important to remember that a home packed with family members is no more festive than a home with one or two lonely occupants, fighting against the blues or worse, feeling underwhelmed by the season and so feeling miserably anti-human, and purposeless, because of it. Home is where you live, no matter what shape or noise that living takes.

Unsurprisingly, I've been thinking about all of this because of a couple of songs. Last night, we listened to Frank Sinatra's "I'll Be Home For Christmas (If Only In My Dreams)" from 1957—a song about home and how we long for it, but often have to settle for it as imagined—and I was again struck by how elementally simple on a technical level is the the arrangement of notes, the movement of harmonics, the rhymes, all of it written out in charts and on sheet music, and yet how mysterious the end result, how endlessly fresh, how in a moment of composition lies the eternity of expression. And yesterday "He's A Rebel" came up on shuffle at the Y. No one in their right mind would call this a holiday tune, and yet it couldn't have arrived at a better time for me, surrounded by the lights and spectacle and oppressive materialism of the Christmas season, as I'm trying to keep my ears and ears tuned to what's timeless. There's something eternal in the changes in this song, as if they've always existed, and surprised into hearing them again, and moved, I found myself still catching up to a song I've heard, and marveled at, hundreds of times. Written by Gene Pitney and recorded by the Blossoms in 1962, "He's a Rebel" was credited to the Crystals, who were then obligated to add the song to their repertoire and who became forever identified by it. The inestimable Wrecking Crew, with dependable Hal Blaine on drums, played on the track, laying the sturdy foundation for singer Darlene Love. Where's Love on this Christmas morning? Phil Spector produced the tune, and where's he now? I know where he is, but how is he defining home, and should I even care? (Coincidentally, it's his birthday tomorrow.) The men and women who wrote, recorded, and produced "He's A Rebel" entered pop myth for me long ago, and may as well be epic characters, some resplendent, some unsavory, most just normal, in a vast story about the Twentieth century. They lived, and live, in the echo of the eternal, something that will always exist just above our heads, practically visible in the ether, even as it pounds in our hearts and chests, moistens our eyes, plugs our throats forever, I'd wager today, this morning.

Anyway, Merry Christmas wherever you are, whatever you believe or don't, if you're in the old homestead or a new joint you just moved to and that doesn't feel like home yet, whether you're with loved ones or on your own. I wish you all sorts of eternal moments, in whatever form they take: family, friends, quiet reflection, loud songs. Maybe today is a good day to look for them, or better yet, to leave yourself open to the surprise of them.

Email ThisBlogThis!Share to TwitterShare to FacebookShare to Pinterest
Labels: 2018, christmas, family, frank sinatra, he's a rebel, home, i'll be home for christmas (if only in my dreams), music, music writing, the crystals