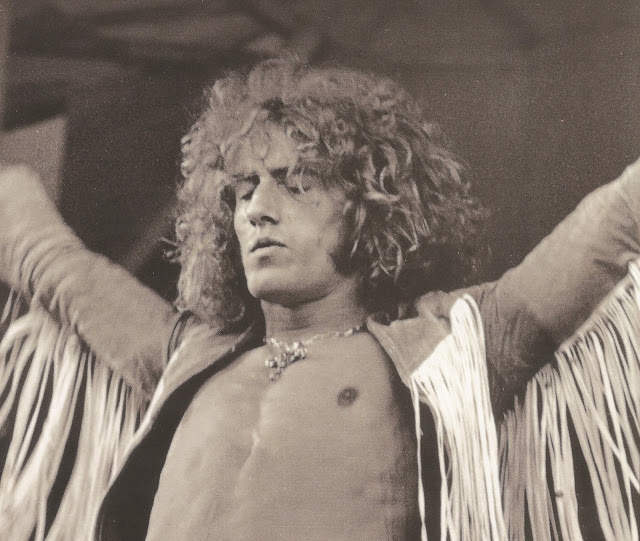 I'm getting a little bored with Rock Star memoirs. Shouldn't I be interested in the trappings of fame fortunes? I'll never posses them. They'll always remain exotic, other-worldly. I'll always be on the outside looking in. I should find tales of global mass success awe inspiring, the experience of, say, a band playing the Super Bowl halftime show riveting. Yet Roger Daltrey's description of that 2010 event in his memoir Thanks a Lot Mr. Kibblewhite is astonishingly similar to Bruce Springsteen's, in his memoir, in its banal reveal of the kind of necessary corporate think that rules stage spectacle. It's much more fun to read about the High Numbers'/Who's early shows on stages a foot off the ground in front of maybe a dozen Mods. Many rock stars lead boring, or anyway deflatingly ordinary, lives off the road, and the endless tour stories get tiresome after awhile. The book begins to grow a bit stale and repetitive after the Who make it, after the band graduates from small, cramped clubs to arenas, after Pete Townshend's songwriting gains traction, and we have to read again about Keith Moon's alcohol abuse and serial trashing/ketchup-decorating of hotel rooms (make that chains), John Entwhistle's creepy weirdness, and Townshend's moodiness and self-absorption. Daltrey's versions of these events don't lack for details; his bad luck is that his stories have arrived so late in the Who's well-worn myth that they don't add anything terribly new. The book, as did the band, loses considerable momentum once Moon dies in 1978, the boring 1980s arrive, and the band goes on a long hiatus, only to reunite on the odd occasion before embarking on a series of farewell tours (the band down to two original members following Entwhistle's death in 2002). Does lordly downtime make for interesting reading? If you want to read about Daltrey excavating the lakes around his ample property, endlessly stripping and staining wood with his mates at his Victorian estate, worrying about tapping big-name artists for his charity shows, or struggling to learn how to act on film and the odd stage production, then this memoir is for you. If not, well.... I've written before about Townshend's similarly disappointing memoir, and where to look if you want his real confession.

"I’m a deeply private person," Daltrey writes. "Why else do you think it’s taken so long to write this autobiography?" That rhetorical question gives me pause. I expect some measure of self-interrogation in memoirs, even in image-managed Rock Star memoirs, and though Daltrey does explore his childhood, adolescence, and adulthood for his social anxieties, personal contradictions, interior tickings, and occasional health scares, few of his excavations are particularly revelatory if you've read a well-researched, well-written Who biography. Though he does confess to a genuine bout of suicidal depression as a bullied lad, Daltrey admits to having difficulty in the Who's early years connecting emotionally with the loners, oddballs, and freaks in Townshend's songs. Daltrey seemingly couldn't understand a boy who had to beat off to pin-up photos ("Pictures of Lilly") when, even at this stage in his career, women were throwing themselves at him (after reading this passage, his doubt looks clear to me in the promo video!). He couldn't stomach singing about a boy forced to cross-dress ("I'm a Boy") as such gender fluidity and queerness were beyond his ken, and it seems, beyond his imagination as well. Eventually, he comes around to understanding how to sing. "Empathy, that’s the root of it all," he writes. "If I can empathize with where [Townshend] was when he was writing it, I’m at the root of the song. And most of those songs were written from a place of pain, as well as spirit."


I struggled at first to find that place and you can hear the struggle. But then I inhabited it. I didn't have to become Pete, I just had to find my own vulnerability. I had to tear down all my own defenses I’d put up to survive. 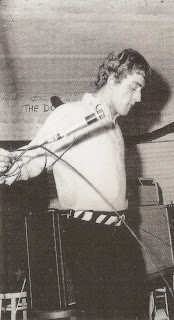 Sounds confessional, but Daltrey mostly plays his cards close to the vest in Mr. Kibblewhite, and that's his prerogative. Unsurprisingly, he's at his best and most insightful when writing about, and marveling at, making music, the chief passion in his life, lyrics aside. He's especially perceptive about his band's legendary stage antics as they dovetailed with a keen understanding and manipulation of commercial instinct, something band managers Chris Stamp and Kit Lambert intuited also. The practical Daltrey, who grew up hardscrabble, was initially appalled at Townshend's infamous guitar smashing. Then he began to understand, on a gut rock and roll level. "Very quickly, Pete wasn’t just smashing his guitar," he observes. "He used to stick the neck of it right up into the amps and through the speakers to make all kinds of surreal noises. It was animalistic. It was sacrificial. The guitar used to scream, and it used to go on for about five minutes until it was wrecked." He adds, "The critics missed it, but the fans got it the first time; they understood through the energy it created. The critics were writing about what they were seeing, but they weren’t listening. That became the problem with the smashing of the guitars; I felt that in the end people had just come to see that; it stopped people listening."

Observant stuff. Describing the Who's early sonic evolution, Daltrey really nails the Who's appeal and surging power: amped-up aggression and nerve fighting with, and within, a pop song, all of it barreling the band forward in unpredictable ways while grappling with real ideas and cultural observations. And Daltrey was in many ways leading the charge. "We were developing the way we performed as well. We were finding ways of expressing our aggression. The phrasing of things, the punch of the chords, more onbeat than swing. Our word for it was drive. Let’s drive, we used to say before a gig. Drive. Drive. Drive."

I used to feel like we were trying to drive our music through the audience to the back wall. I’ve always done that, even at Woodstock, with no back wall and half a million people stretching over the horizon. I had to drive the curvature of the earth. It’s no good to play at an audience. You’ve got to play to them. You’ve got to try and move them. You have to drive through them. And it works.

Indeed. I had to drive the curvature of the earth. What a line! What a summary of how rock and roll became Rock, how audiences morphed from shoulder-to-shoulder intimacies in sweaty clubs to open-air communing under the sun and rain, and how one man learned how to sing it. 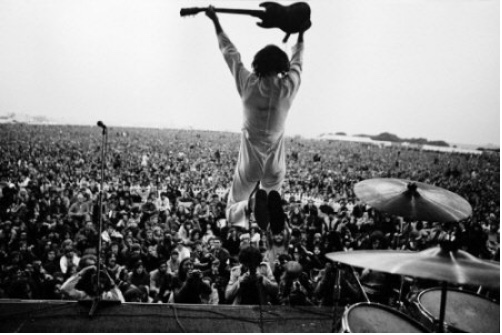 Photos from Thanks a Lot Mr. Kibblewhite; top and middle photo cropped; photo of Townshend leaping at Woodstock via tumblr.
Posted by Joe Bonomo at 1:32 PM