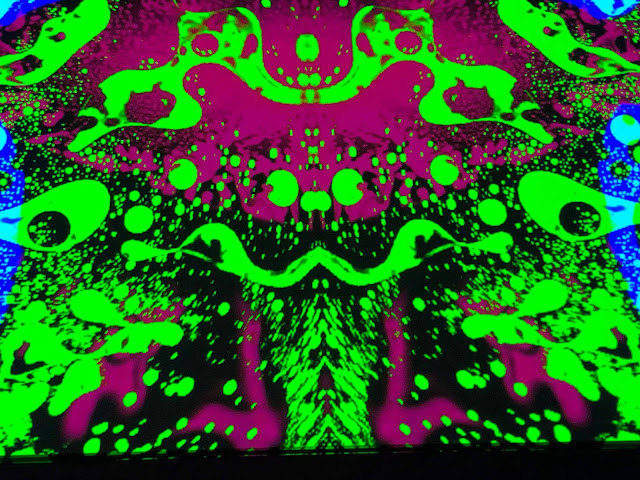 DOWN AT THE ROCK & ROLL CLUB—I paid overdue respect to Roky Erickson last night at Lincoln Hall in Chicago. Erickson, who's had highly publicized bouts with mental illness in the past, and an up-and-down career, is something of a legend among rock and rollers. He was led by his guitarist to a leather high chair at the front of the stage, where he sat, virtually immobile and silent, when he wasn't signing, for the duration of the show. I'm not sure that his guitar was plugged in; I couldn't hear his playing, anyway, but it didn't matter. His physical presence coupled with the decades of strife almost visible around his face and ample body stole the show. Now 71, wearing a gray sports jacket, black pants, and slippers, gently smiling, Erickson gives the impression of a content, bearded Buddha, sitting patiently with his fingers laced together over his stomach as his lead guitarist, the show's emcee, announced the next song or tuned his guitar. Erickson's band is supremely tight and they play warmly; the rhythm section looks like they could gig in a Ten Years After tribute band if they wanted to, and that's accounting for their considerable chops and ensemble playing more than their hirsute, hippie appearance. Erickson, well, he sang and warbled and yelped, muttering a quiet "thank you" during the show only once (ignoring the thinks-he's-funny idiot in the crowd who yelled "Speech! Speech!" once or twice). The songs ranged from up-tempo rockers to blues-based ballads, and when Erickson was plugged-in emotionally, such as on "Starry Eyes," a wonderful tribute to his wife, he sang with honest depth, his eyes often shut against the mood; he seemed to belie his large body by mentally floating off and vibing with the songs as they were played. Quirkier and offbeat tunes "I Walked With a Zombie," in which Erickson spun a yarn without telling a story, "Johnny Lawman," and "Two-Headed Dog," and 13th Floor Elevators' classics "(I've Got) Levitation" and the inevitable closer "You're Gonna Miss Me" found Erickson alternating between leading the vocal charge, his eyes alight, and letting the songs' infamy do most of the work for him. He left without an encore, shuffling off the stage with the aid of the guitarist who'd walked him on earlier, his legacy assured and his present still charged. 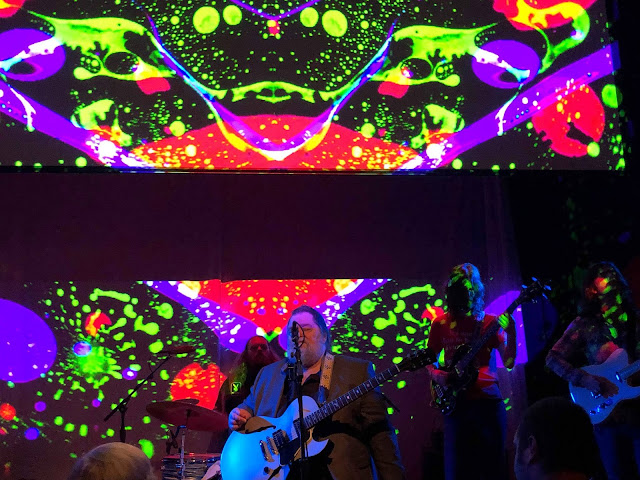 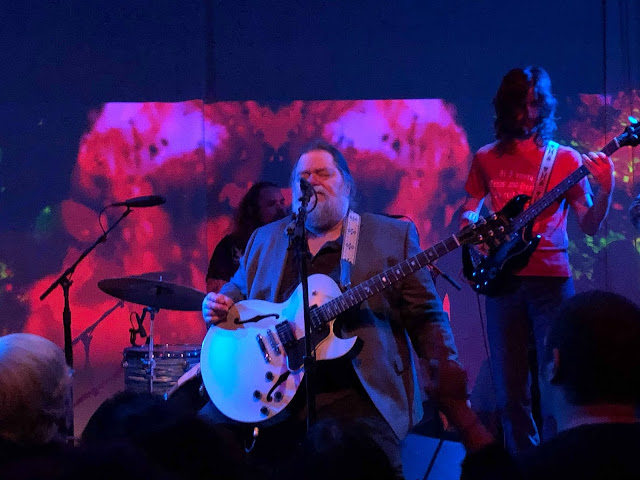 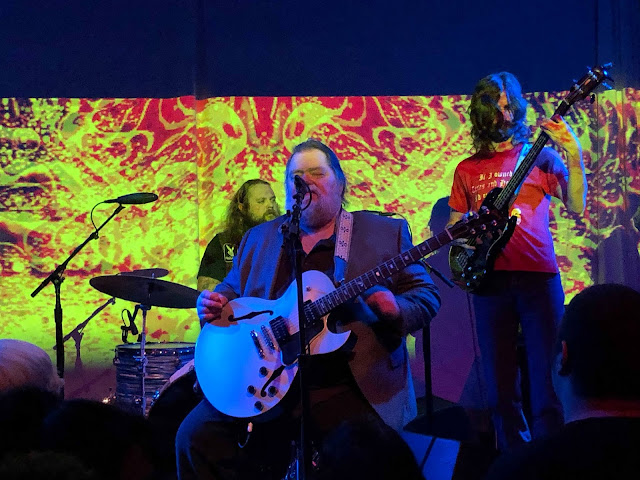 During the show Lincoln Hall projected a swirling psychedelic light show on a large screen above and behind Erickson and his band, and it felt as if the display had been percolating since White Mystery's storming opening set. I'm a fan of Miss Alex White & Francis Scott Key White, two Chicago siblings who raised the roof last night with their powerhouse glam rock roll funk lo-fi blues. Miss Alex plays charged and stirring riffs and screechy Hendrix-like wails on a sunburst Rickenbacker, and wore a black latex bodysuit and white platform boots, her red hair teased in a 'fro. White Mystery's songs are sexy, anthemic, and a little dark, rousing but, yes, mysterious, too. The band has been on the road with Rocky Erickson for two weeks and though clearly amped to be playing in front of a home crowd, the duo showed a bit of road burn, at least relative to the electrifying show of theirs I caught at The House in DeKalb a few years back. Francis Scott Key White gave the impression of someone who'd slept through sound check and woke up just in time to forget to button his pants but still man the drums, chugging behind Miss White's righteous riffing. At the end of the set, the drummer and guitarist switched places, a standard move of the theirs; while he mumbled incoherent poetry into the mike, she sat behind the drums but still kept riffing on her guitar as she thumped a four-on-the-floor with the bass drum. A perpetual motion machine, White Mystery. At the end of the set Miss White sweetly informed the crowd that her parents were in attendance. (Her mother Diane White is a celebrated Chicago photographer; among other accolades she shot iconic photos at the infamous Disco Demolition at Comiskey Park in 1979.) It's that kind of homey, bro-and-sis charm coupled with the band's nervy eroticism—a crowd-pleaser was the tune "Fuck Your Mouth Shut"—that ignites and moves this band. I highly recommend you do the White Mystery thing in your town if you haven't. 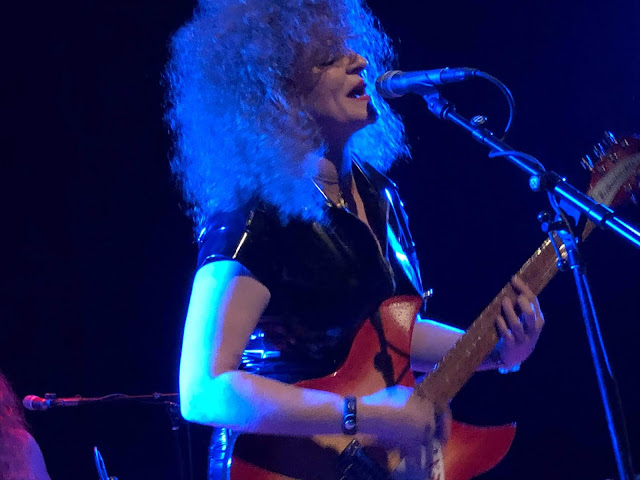 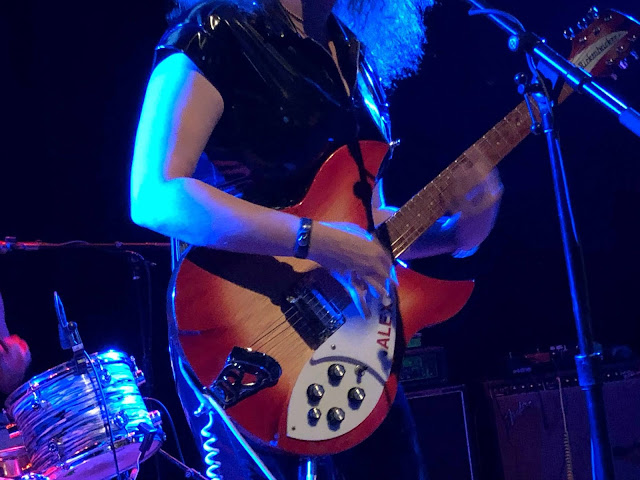 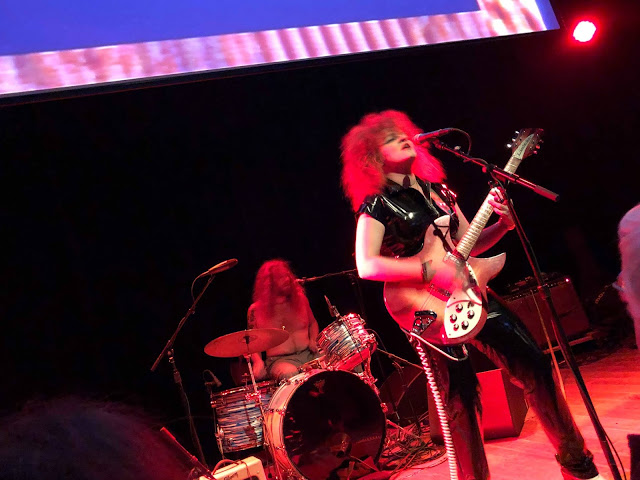 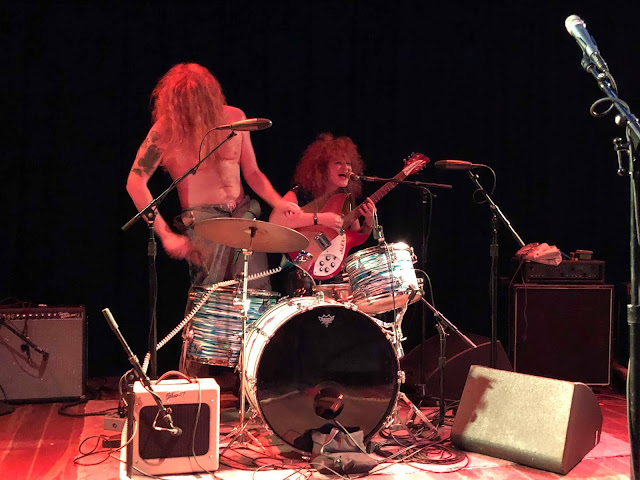