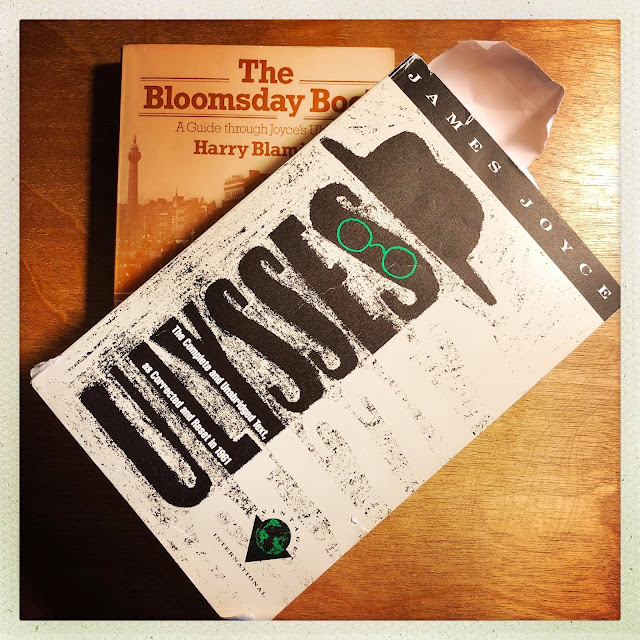 Cutting across campus yesterday: a confluence of the gray weather, chill, and looming academic buildings brought me right back to McKeldin Library, at the University of Maryland, where as an undergrad I took a course in Joyce and Yeats; we ended the semester with a couple weeks devoted to Ulysses. Blessedly, my teacher assigned Harry Blamires's indispensable The Bloomsday Book to help us through Joyce's epic. I worked in the division of Non-Print Media (a quaint name!) at Hornbake Library, and in the hours before my shift started I'd enter McKeldin—gray and dusty, the oldest library on campus—head upstairs to the fourth floor, wind my way through seemingly endless stacks of musty books, and select a tiny desk in a tiny carrel in front of a tiny window. McKeldin was built in the late 1950s and wasn't renovated until two years after I'd graduated, so at the time felt, to me, ancient and catacomby with its narrow aisles and hushed stacks. I'd pop a couple of No-Doz, my usual lunch or dinner substitute, open Blamires's book, read a chapter and orient myself, and then dive head-first into the corresponding adventure in Ulysses. The movement from Ramires' dry, helpful summaries to Joyce, well, it was a leap from one language to another, thrilling and exotic and urgent. There was nothing quite like these afternoons for me as a student, lost in the richness of characters' interior worlds in a foreign city rendered so tactile it might've been outside; not even the hours I'd spend as a DJ on my radio show at WMUC compared. When I finished, the afternoon light straining through the old old window, it would be dusk, and I'd stumble out of McKeldin and gaze at the long, sweeping McKeldin Mall: night coming on, guys and girls coupled or solo against the cutting wind, my head Joycean and speeding and reeling, the landscape altered. I was 21 and I felt eternal. These hours spent with Ulysses at a cramped wooden desk in front of a narrow window overlooking campus remain among my most cherished and transformative reading experiences. A close second: a few years later at Ohio University in Athens, in graduate school, reading for the first time Faulkner's The Sound and the Fury with the peerless Dr. Dean McWilliams, and walking home after the late-May seminar, following an inevitable detour at The Union or Tony's, my bars of choice, to where I lived in the blighted west end of town and honeysuckles honeysuckles everywhere as I reckoned with Quentin and Benjy and Caddy, oh Caddy....

Coming down the steps in Reavis Hall yesterday, on my way to teach, a girl coming up the opposite way stumbling slightly, her head down, deep in a book. Timeless stuff.