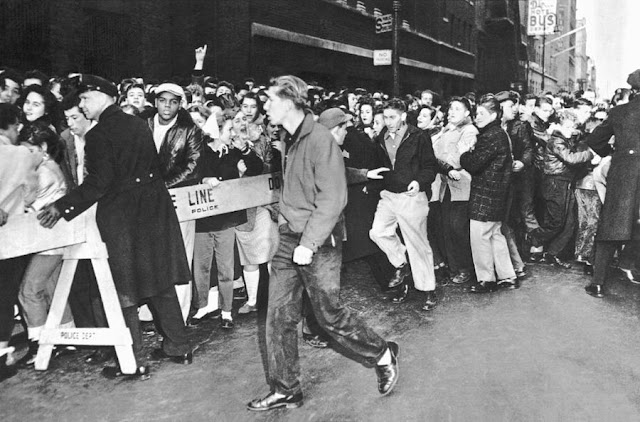 Charlie Gillett, from his introduction to The Sound of the City: The Rise of Rock and Roll, first published in 1970: "The city’s sounds are brutal and oppressive, imposing themselves on anyone who comes into its streets. Many of its residents, committed by their jobs to live in the city, measure their freedom by the frequency and accessibility of departures from it."


But during the mid-fifties, in virtually every urban civilization in the world, adolescents staked out their freedom in the cities, inspired and reassured by the rock and roll beat. Rock and roll was perhaps the first form of popular culture to celebrate without reservation characteristics of city life that had been among the most criticized. In rock and roll, the strident, repetitive sounds of city life were, in effect, reproduced as melody and rhythm.

The above photo, via Underwood Archives, is titled "Teenage Rock 'n' Roll Fans" and was shot on February 23, 1957 in New York City on 44th Street, as fans were "restrained by police as they line up to see disc jockey Alan Freed and the movie, Don't Knock The Rock." Two months later on April 6, an AP photographer captured one of the most iconic images in rock and roll, below, an "unidentified teenager" losing her mind and her body at an Elvis Presley concert at the Arena in Philadelphia. (Photo via Flashbak.) Among my favorite rock and roll images, few shots top these two moments which, though well known, beg yet another view. Look at her body, somehow both rigid and fluid, out of control and in charge, a saint being assumed by the devil's music. Positively (anti) Pentecostal. How could she not have been permanently altered, emotionally and physically, by this? Man, I'd love to know who she is, to find her, and to ask her, at the risk of sentimentality: what did it feel like? And the two girls next to her, keeping it together, look as if they're both fighting decorum, pity, embarrassment, and not a little envy: wow look at her, it's scary, she's gone, do I want to go too? 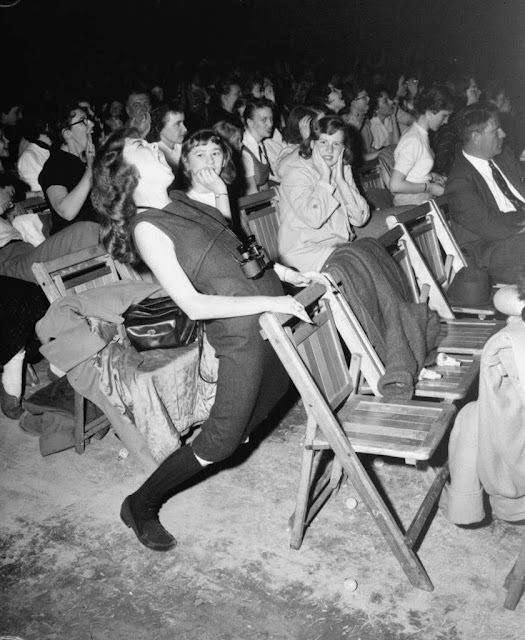 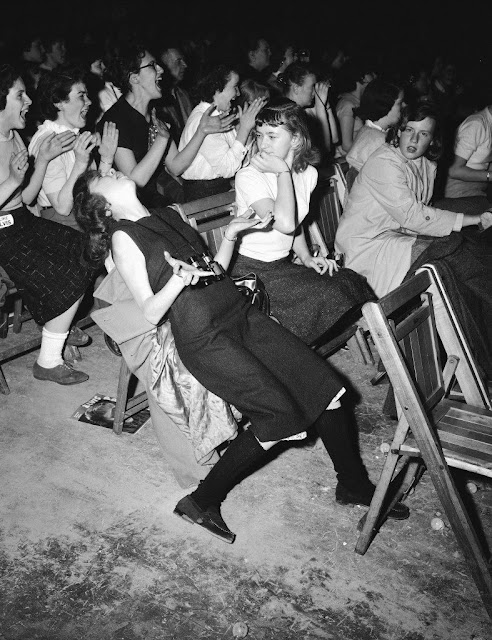