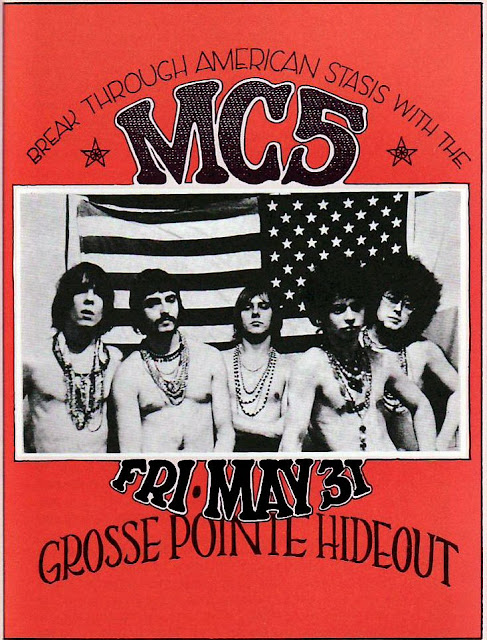 From The Mansion on the Hill: Dylan, Young, Geffen, Springsteen. and the Head-On Collision of Rock and Commerce by Fred Goodman:


...the [MC5's] legend...really began to solidify with a May 31, 1968, gig at the Grosse Point Hideout. The club, one of a chain of Hideouts owned by rock manager Punch Andrews, drew a capacity crowd of four hundred kids that night, perhaps helped by Gary Grimshaw-produced handbill that showed the band, naked in front of a backward American flag, along with the legend “Break through American stasis with the MC5.”

During an opening set, [John] Sinclair and drummer Dennis Thompson had stepped outside to smoke a joint with a group of local kids when the club’s security guards saw them and called the police. About to be arrested, Sinclair and Thompson got word to the band. Ron Levine, the group’s roadie, took the microphone in front of the packed club and urged the crowd to surround the police outside if they wanted the show to go on. And although the police dragged Levine offstage and quickly closed the club’s doors to prevent a confrontation in the parking lot, the manager was sufficiently shaken to have the police release Sinclair and Thompson. It was a triumphant MC5—and an equally jubilant audience—that rocked the Hideout that evening. When the exasperated club manager later shut off the electricity in a bid to end the frenzied show, the audience—led by guitarist Fred Smith—chanted “Power! Power! Power!” until the electricity was turned back on and the band allowed to finish.


Top photo via Pinterest; bottom photo via Make My Day.
Posted by Joe Bonomo at 11:51 AM