All stories are personal 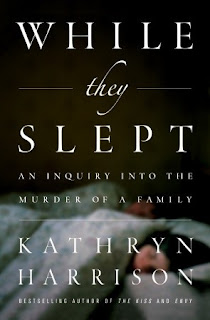 I admire Kathryn Harrison's memoir The Kiss and teach it regularly; her absorbing While They Slept: An Inquiry into the Murder of a Family is a fascinating companion to that book, as Harrison acknowledges that what intrigued her was her unsettlingly deep and graphic identification with the subject. In 1984, Billy Gilley murdered his parents and young sister in their home; he spared his other sister, Jody. The Gilley's parents had routinely abused and terrorized the children since they were young, and Billy half-imagined/half-hoped that he and Jody would run away and begin a new life together. That never happened. Jody called the police that night after escaping the house, and Billy was arrested. He's currently serving multiple life terms in a prison in Oregon.

What fascinates Harrison about the incident is how Jody's life snapped in two on the night of the murders. Harrison's life has a before-and-after, as well. As she recounted in The Kiss, when she was college-aged she embarked on an affair with her father, a man who'd been absent for her whole life. He preyed on and manipulated Harrison into a sexual relationship, which lasted for several years before Harrison escaped, beginning her fraught new life. In While They Slept Harrison explores Jody's similar dilemma: how to begin a second life after the first ended so abruptly and violently?

Jody's and Harrison's pasts, as different as they were on the surface, are linked by violence and rebirth. As Harrison remarked to Sarah Weinman at Vulture, "My response to people who say, 'Oh, there goes Kathryn Harrison talking about her father again' is 'I'm not getting over this! If you're waiting for me to get over it, it's not going to happen.' It would be very unnatural if I did get over it."


It's also one of the reasons Jody let me write the story—because I could say to her, you and I have been through different things, but we are both people with lives that have suffered a rupture. I believe that about myself. My relationship with my father broke my life into two pieces.

I saw aspects of myself in those children. I understood Billy's rage. You could say there was some ugly gratification in exploring what it was like to pound your father's head in with a baseball bat because I am someone who felt murderously angry at my father. I have fantasized about killing my father. Not with a baseball bat; a little more distantly, with a gun … I got both Billy and Jody in a way that made me want to tell what was a very different story from mine, but one I felt connected to from the beginning. It resonated.

While They Slept is, then, two books: one a journalistic, well-researched and well-told recounting of the history and destruction of the Gilley family, the other a parallel narration of Harrison's personal intersection with that story. Harrison traveled to Oregon, interviewed both Billy and Jody (who's now on the east coast) at length, researched effects of child abuse and family violence, and read court documents, letters, and creative pieces that both Billy and Jody have produced, attempts to make sense of or re-imagine their chaotic lives.

Unlike with Truman Capote's In Cold Blood, a dusting to raise authorial fingerprints is unnecessary: throughout, Harrison places herself in the center of the book alongside her subjects. Some readers (see Amazon, Goodreads, et al) and critics have complained about what they view as "inappropriate" insertions of Harrison into the story she's telling. Beyond the normal amount of noise this adds to the debate about the value of creative nonfiction (a term I dislike), such readers' reactions seem to miss the idea that all stories are personal, even the ones to which we seem to have little ostensible relation. Humans are often drawn to stories because we see ourselves reflected back; if the identification isn't that distinct, and sometimes it isn't, then we read to watch others enacting trivial or profound tales of the human condition, ideally experiencing some measure of empathy along the way. Harrison saw young Jody as a silhouette into which she, Harrison, fit; startled and moved by this discovery, she explored how storytelling shapes the lives of the storytellers, both the story Harrison told to keep herself whole after her father's abuse and the story she tells of Jody's storytelling that Jody shaped to keep herself whole. While They Slept is a fascinating book, and a bit daring, too, in its insistent author/subject symbiosis: an unsympathetic, ungenerous reader might read self-absorption into Harrison's motives in writing it, when what really moves Harrison is recognition of the heartbreaking links among us, the tethering that reminds us that we're not alone and are, in fact, enacting a story as old as time itself, however private ours might feel. That seems to me the great abiding value of memoir.
Posted by Joe Bonomo at 12:15 PM

Email ThisBlogThis!Share to TwitterShare to FacebookShare to Pinterest
Labels: Autobiography, books, kathryn harrison, Memoir, memory, narrative, storytelling, the past, while they slept, writing