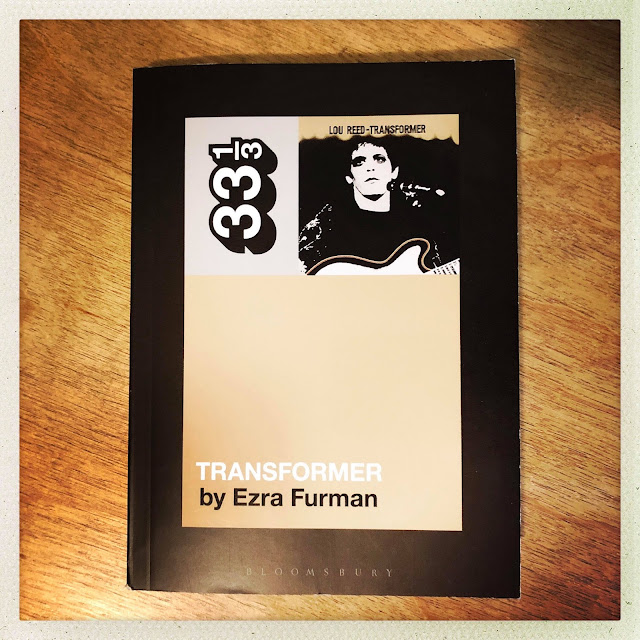 Rock & roll is so great, people should start dying for it. You don't understand. The music gave you back your beat so you could dream...The people just have to die for the music. People are dying for everything else, so why not for music? Die for it. Isn't it pretty? Wouldn't you die for something pretty?
—Lou Reed

Ezra Furman's 33 1/3 book on Reed's Transformer moves among many impulses. Furman's respectful, adoring, obsessive, overly forgiving, overly harsh, indulgent, embarrassed, knowledgeable, joyous, stubborn, and skeptical in his take on Reed's iconic second album, careful not to absolve Reed of his racism and sexism as he extols his brave, idiosyncratic navigation of his queer identity. It's a great read, equal parts autobiographical and critical, doing what the nervier books in the Series do: risking reverence and personal crushing at the expense of objectivity, and loving the friction that comes when those fanly impulses rub up among each other. (Deeply personal, the book's likely to be embraced by many, and dismissed by some.) Furman, a songwriter and musician, is at his best when he talks about the tensions in Reed's gestures. Is he gay? Queer? Straight? Or does he ignore labels and try to live among them? And is he sincere or bullshitting, anyway? The album's "gay-themed songs are hiding in plain sight," Furman writes. "Many listeners were amazed that the line 'even when she was giving head' was not censored on UK radio stations; the censors were, reportedly, not familiar with the term."


But listening forty-odd years later, with the shock value of sexual songs considerably if not totally dulled, the non-explicit lyrics are where the real intrigue lies. These songs fascinate, not for the excess and over-the-top deviance that was associated with Lou Reed in the sixties, but rather for their understatement, their partially submerged aggression, and the damaged personality they both mask and expose.