"We are Four New Fevers" 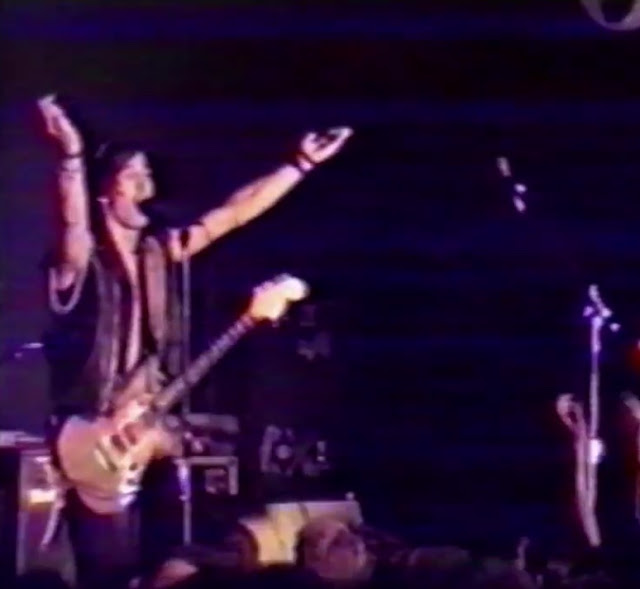 A very interesting video popped up on YouTube recently, footage of an infamous Fleshtones tour of Italy in 1987 from which Peter Zaremba was notably absent. (Read all about the dysfunction and subsequent fallout in Sweat.) Reduced to a four-piece, the Fleshtones cancelled some gigs and gamely played others (Zaremba finally showed up for a show in Greece with Hoodoo Gurus and the Dream Syndicate.) Here, Streng, an unwitting front man, leads the band—Bill Milhizer, Gordon Spaeth, and Robert Burke Warren—through "Legend of A Wheelman," "Southern Twitch," "Way Down South," "Mean Ole Lonesome Train," "The Dreg/Hexbreaker," and "Return of the Leather Kings"; Warren sings lead on his track, "I Can't Do Without You." These odd "Fleshtones shows" were essentially Full Time Men gigs, Streng's side band with Milhizer, Warren, Spaeth, and guest musicians. They'd record a full length album Your Face My Fist, in January of 1988.

A bright side to all of this discord: the Fleshtones would later perform a make-up show in Italy at a beach near Rome. At the conclusion of the gig, Peter and Bill jumped into the ocean and swam away as the rest of the band was finishing Jody Reynolds’ “Endless Sleep,” a tune about a guy who saves his girlfriend from drowning. “They had set the stage up on the beach,” Peter remembers. “By the time we were playing, the tide had come up and there was water coming up under the stage. We were expecting to get electrocuted any second. It seemed like the only appropriate way to end a show like that was to swim away.” Peter and Bill, tom-drum in hand, ended up somewhere down the beach. “There was another party going on in an establishment on the beach,” Bill laughs. “So we walked in there soaking wet because we didn’t want to come back to the Fleshtones-show area just yet. That would blow the exit!”