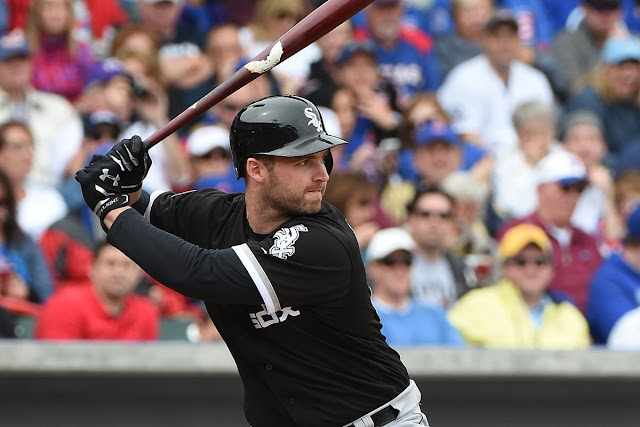 As I've written about the last couple of seasons, I'm keeping my eye on Chicago White Sox third basemen and designated hitter Matt Davidson. I think that I learn more about baseball—its difficulties and challenges, as well as its occasional transcendent moments—by watching a single player over the course of a season or more. (I'm this way with teams, too; I'm regularly impressed by friends of mine who have League-wide knowledge of many teams over the course of a season.) When I was a kid, I followed Ruppert Jones because, living in suburban Washington D.C., Jones, a Seattle Mariner, was far enough away for me to project my love on the game onto, and he could live in my imagination. I rarely if ever saw him play, but followed his stats in the newspaper. He was mine.

It's different, of course, with Davidson. I'm an adult now and can see beyond childish attachments to a player (which still occur!) to be able to gauge what in a player 's approach might be emblematic of the game and its grown-up challenges. Davidson intrigues me because he's pretty ordinary, relatively speaking: he's not a feared slugger nor was he ever projected to be; he's an average fielder; he runs OK. In short, he'll probably struggle in some way, everyday, to maintain his presence in Major League baseball; he'll have hot streaks and go off on offensive tears like every player at this level is capable of, but he'll eventually regress, as they all do. Watching Davidson is my annual lesson in Major League Baseball Is Hard, Even For The Ones Who Make It. That he has a good shot to become the team's starting third baseman says as much about his tenacity and drive as it does it says about the White Sox talent and depth at the position.

In the Chicago Tribune, he spoke about his goals this year. “Seeing results gives you confidence,” he said. “Ultimately, I want to improve on that. I was glad I was able to show a little bit of what I can do. I still feel like there’s more to do.” He added:


It’s an art. All the greatest hitters, that’s something they have. They swing at strikes instead of balls. A good starting point is staying in the zone that you want and being ready to hit that pitch only and not trying to hit too many pitches. If somebody has a nasty slider it’s a ball … you can’t hit for the most part. The thing is, (it’s) not swinging at balls out of the zone, it’s swinging at pitches in the zone.

Late in the piece, Davidson reveals that he's a fan of former White Sox Paul Konerko. So was I.
“(Konerko) would never settle for not perfecting his swing,” Davidson said. “Pitchers are so good now, you have to be so precise on every swing and every pitch of the at-bat. You can’t give up (on) a pitch because that might be the one good one you get to hit.”

Paulie is a great player for Matt Davidson to emulate, someone to whom the game never seemed to come all that easily, someone who seemed to almost visibly wear (as Roger Angell might say) the difficulties of playing baseball consistently well at this level. Here's hoping that Davidson learns patience, at the plate and at every other place in the park.
Posted by Joe Bonomo at 1:21 PM