"I play the electricity"

Richard Lloyd's new memoir Everything is Combustible: Television, CBGB's, and Five Decades of Rock and Roll, is a curious book. In sixty-nine loosely linked, non chronological vignettes, Lloyd moves from recounting a fiercely interior, self-aware, and precocious childhood toward his wandering, drug- and alcohol-soaked twenties, up to the present day (Lloyd, with a backslide or two, has been clean and sober since the mid-1980s). In an oddly childlike tone, he writes about his favorite guitarists, lots, and lots of sex, lots, and lots of drug use (cresting with a crippling heroin addiction in the early 1980s), and his recording and touring career as a founding member of Television and as a solo artist and session musician.

In the prologue, Lloyd makes an interesting distinction between autobiography and memoir, insisting that he's composing the latter, which allows writers to wander among life's events, untethered to chronology, and to "understand [themselves] a bit and to share their lives from the inside." Yet for the most part, Lloyd observes, with detachment, his life's worth of sensual, pharmaceutical, and artistic adventures in the world's "lunatic asylum"—occasionally floating theories on spirituality, mysticism, Dharma energy, and psychology, especially in the book's ponderous final pages—with nary a note of self-reflection. We shouldn't necessarily expect deep character excavation in rock star memoirs, but we can hope for some measure of stock-taking, of wisdom or perspective arriving with the long view. For the most part, Lloyd seems uninterested in that; rather, Everything is Combustible reads like a dispassionate diary, closer in tone to Walter Benjamin's "Hashish in Marseilles" than to a revealing memoir.

That said, the book's juicy as hell. In the late-60s in Los Angeles, Lloyd palled around with the idiosyncratic guitarist and performer Velvert Turner, a protege of Jimi Hendrix's from whom Lloyd claims to have learned tricks on the guitar. For a time in the mid-70s he hung with Anita Pallenberg and Keith Richards, the latter of whom invited Lloyd down to Jamaica with him on a whim. Alcoholism and drug abuse permeates the book, and the extent of Lloyd's recreational drinking and drugging is astonishing; that he's alive is a remarkable testament to, as he sees it, his stamina, native curiosity in the expanding limits of body-testing, luck, and prayer. Lloyd's other major preoccupation in the book, sex, is mostly of the mid- and late-70s one-off variety, much of it emotionally engaging for Lloyd, a lot of it degrading and tawdry, and sometimes mean-spirited, for both parties. There's a funny scene involving Keith Moon in a tux, and a great revelation that Joey Ramone wrote his early Ramones songs on a guitar with only two strings. Lloyd gets digs in at his fellow band mates, particularly Tom Verlaine, whom he barely tolerates, endeavors to correct one or three errors in others' memoirs of the era and scene, and details the up-and-down recordings sessions of Television's three albums (Marquee Moon, Adventure, and Television) all with an innocent, wide-eyed view of the wonder of the world and the strange people doing strange, sometimes weird, sometimes tragic, often funny things on it.

Two of my favorite moments in the book revolve around music, unsurprisingly. One occasion is couched in a very particular moment in time. In 1978, Television's second album Adventure entered the English charts at #7, but as Lloyd observes, "the timing of our tour for the record was all wrong. While on tour we received a sample of The Cars’ new record. That’s when we knew we were done for in terms of mainstream radio airplay."


We were sitting on the tour bus while listening to it and Tom [Verlaine] threw up his hands and said, “Well that’s it—that’s a commercial Television. Elektra now has a band that is commercial and they are going to forget about us.”

Verlaine, however despairing, was on the money about Ric Ocasek's band; they were just on this side of pop in their arty songwriting, a Top 40 instinct that Television seemed to lack. Lloyd: "Too bad, but we broke up later that year anyway."

The other moment is more universal. Lloyd's hanging out with Keith Richards at Richards's house in Connecticut, when Keef asks Lloyd if he'd "like to have a play." Nervously, he says yes. "Two acoustic guitars soon arrived," Lloyd recalls. "This shocked me a little bit because I was used to playing electric guitar and hardly ever played acoustic."


I always say that I play the electricity while the guitar plays me and the three of us dance while the music comes out. 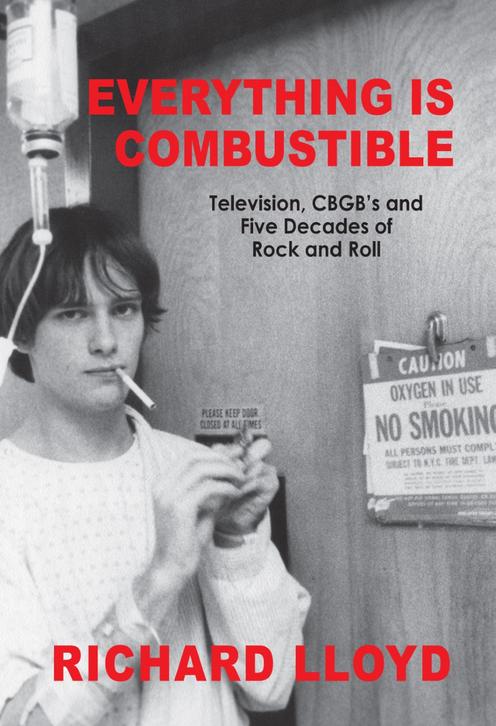 Photo of Richard Lloyd and Fred Smith of Television performing at CBGB's in New York City on March 14, 1980 via Getty Images
Posted by Joe Bonomo at 12:08 PM

great insight on the Cars. If my local grocery store's muzak system is an example, TV did get their "hit;" on a recent night heard "See No Evil" followed by one of Hootie's big hits. Still can't get used to that kind of thing happening.....

Yeah, I think that with royalties, RL and TV are doing OK, though RL does feel that he was screwed out of publishing dough.