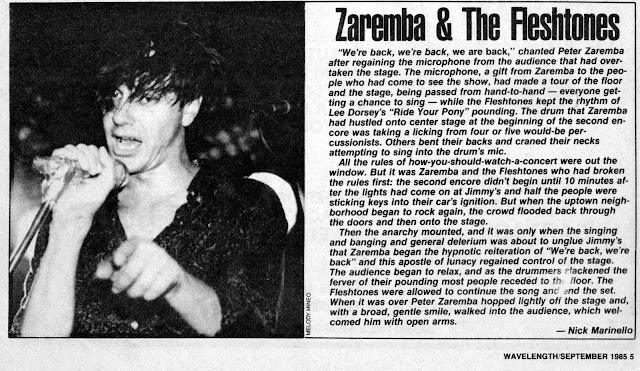 I love this small Wavelength article that Jimmy Anselmo posted to the "‎I Attended Concerts At Jimmy's Music Club in New Orleans" facebook page, a description of a 1985 Fleshtones show at the late Big Easy rock and roll joint, a favorite Fleshtones haunt. "All the rules of how-you-should-watch-a-concert were out the window," Nick Marinello wrote. "But it was Zaremba and the Fleshtanes who had broken the rules first: the second encore didn't begin until 10 minutes after the lights had come on at Jimmy’s and half the people were sticking keys into their car's ignition. But when the uptown neighborhood began to rock again, the crowd ﬂooded back through the doors and then onto the stage."


Then the anarchy mounted, and it was only when the singing and banging and general delirium was about to unglue Jimmy's that Zaremba began the hypnotic reiteration or “we're back, we're back” and this apostle of lunacy regained control at the stage. The audience began to relax, and as the drummer slackened the fervor of their pounding most people receded to the floor. The Fleshtones were allowed to continue the song and end the set. When it was over Peter Zaremba hopped lightly off the stage and, with a broad, gentle smile, walked into the audience, which welcomed him with open arms. 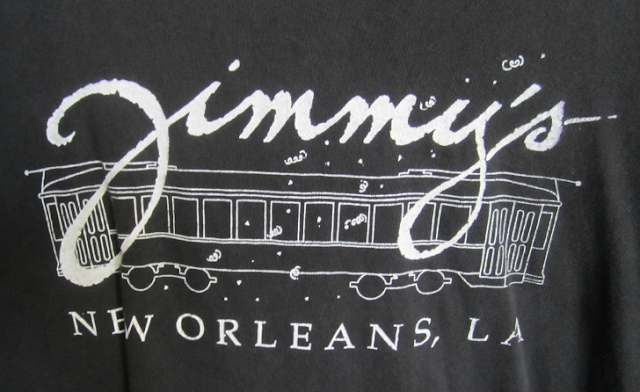 Photo of Jimmy's t shirt via My Spilt Milk.
Posted by Joe Bonomo at 11:47 AM