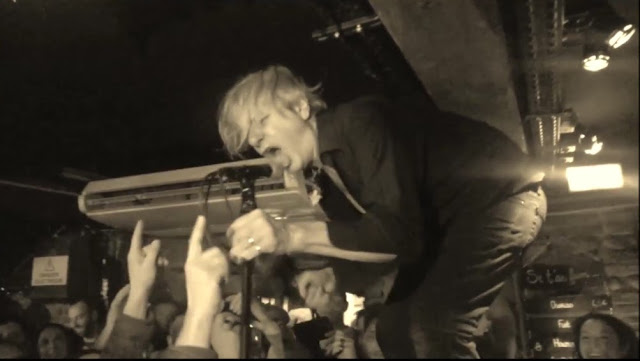 I made the case years ago that the Fleshtones are one of the great and criminally underrated rock and roll bands. I occasionally still feel the urge to testify. Last night at Le Taquin, a venue in Toulouse in southern France, the Fleshtones closed out a two-week, fifteen-city tour of Italy and France, two countries long enamored with Super Rock. As the behemoth Rock and Roll Hall of Fame ™ trumpeted their Fan Vote ™, the Fleshtones played in front of small but intense crowds, packed into intimate clubs. The band debuted at CBGB in May of 1976 and have never had an inactive year, a claim very few, if any, American R&R bands can make. Above is sixty-three year-old Zaremba on top of the bar in Toulouse, leading a sold-out club singing along with "The Way I Feel"—the band's statement-of-purpose that they recorded with Marty Thau way back in 1978—seguing into a cover of the Yardbirds' "I Wish You Would." (Video below via boyissy.) Zaremba eventually makes it back to the stage, but a bar top is as natural a place for him to be as any, as the Fleshtones have spent decades tearing down the wall between stage and fan. A shame that they can barely afford to play extended tours in their home country anymore. (American Beat, indeed.) Few bands match the Fleshtones in sheer endurance and energy. For that reason along I hope that they'll be appropriately feted someday.

Email ThisBlogThis!Share to TwitterShare to FacebookShare to Pinterest
Labels: rock and roll, super rock, sweat: the story of the fleshtones america's garage band, the fleshtones