Legend and Lots of Drugs 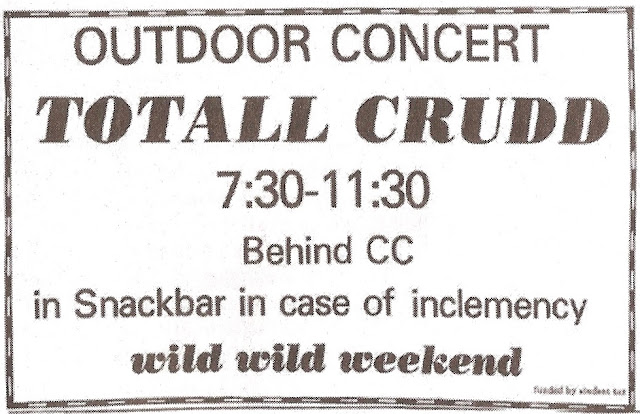 The latest issue of Ugly Things features Sal Cincotta's piece on Total Crudd, an early 1970s, New Paltz, NY-based band. The article's everything that's great about rock and roll and everything that's great about Ugly Things. Total Crudd is most (in)famous for featuring Ross (soon to be "The Boss") Friedman, who left the band to join the Dictators. The band also featured Zeke Bruschi, Joey DeBenedetto, and Jim Sugerman, each of whom led interesting lives post-Crudd.

Cincotta rounded up the the members for a lively oral history, a must-read if you're interested in the era between the Sonics and the Ramones, when young diehard bands like Crudd kept the rock and roll flame going before heading into obscurity. The article's a blast, spiked with hilarious details that evoke the trashy, hungry early days of a ragtag rock and roll band inspired equally by blooze, parties, and misdemeanors, when everything was accomplished with a half-grin. "All the stories I tell you have been duly affected by legend and lots of drugs," Bruschi acknowledges, adding, "It happened at a time when events are very compressed in your life and it happens quickly, but is long-lasting. For those four years, we were thrown in together. Plus, we had the roots of coming out of the Bronx. The whole essence of Total Crudd was in the communal living. That's what made the magic happen. It was way more than just guys being in a band. It was how we lived."

That's a Rock and Roll Manifesto, there.


The first time we had a Crudd-type rehearsal was with Mike Roth on guitar, who we knew from Bronx High School of Science. We had to steal shopping carts to get the drums and amps up and down the hills of the Bronx. We set up in Arty’s mother’s apartment, and were playing Blue Cheer songs, with the feedback knocking pictures off of the walls! When we stopped playing we heard banging on the door. We looked thru the peephole and saw Arty’s mother, the landlord, and the cops; That was my first memory of Crudd practicing or playing. (Bruschi)
...
Every rehearsal, which was our off Fridays and sometimes Sundays, was a combination party and rehearsal in front of 50 to 100 people. We'd have the audience vote on arrangements. “Should we do that bit twice?” (Bruschi)
...
At any given time a party could erupt. There were plenty of nights when it was 2:00am and 25 people would show up. and we'd get out of bed and play. (DeBenedetto)

Fantastic. Do yourself a favor: buy the new UT (better yet, subscribe) and read this homage to a forgotten band, the likes of which is staggering hungover but hopeful to their next party/gig/party tonight, somewhere. 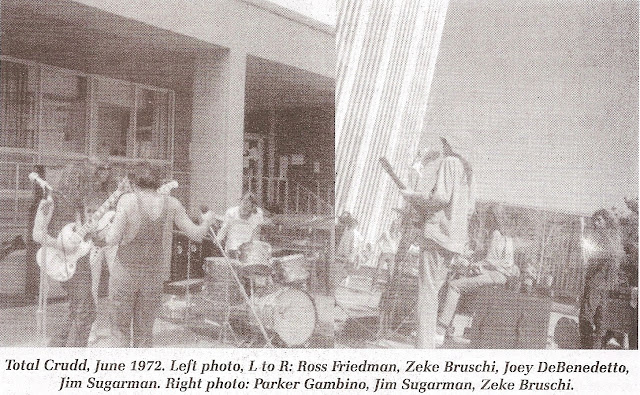