Watching the Fab Four in '64: A Conversation with Beatles Historian Doug Sulpy 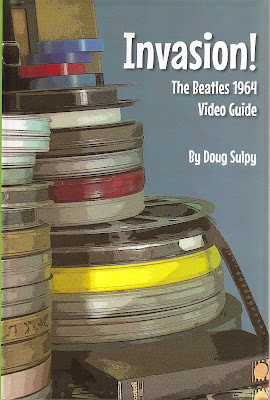 The age-old question "Does the world need another book about the Beatles?" is answered monthly at Amazon: yes, apparently. But Doug Sulpy, a Beatles historian and longtime editor of The 910: the International Journal for Beatles Scholars and Collectors, has produced something different from the average Beatles book. Invasion! The Beatles 1964 Video Guide is a reference book that catalogues every second of every excerpt of circulating video documenting that tumultuous and unprecedented year. Reporting on numberless limo rides to and from airports, repetitive press conferences before and after shows, thousands of wailing girls, and snippets of concerts, these clips tell the mad story of Beatlemania and the relentless scrutiny the group experienced, an explosion of attention detonated seemingly over night. In the absurd fish bowl of 1964 the Beatles continued to write top-shelf pop songs, and recorded two albums (A Hard Day's Night and Beatles For Sale), a non-album EP (Long Tall Sally), and a standalone single ("I Feel Fine" b/w "She's A Woman"). Oh, and they made a wildly-popular and influential movie.

On the trail of a good story, inspired equally by curiosity and cynicism, the relentless press was at the band's heels, filming them dashing in and out of hotels and concert venues, mobbed by fans, and waving from balconies, and lobbing inane questions at them in press conferences. (As Sulpy must've run dry on synonyms for "screaming" and "crying" early on while annotating these clips, so did the Beatles exhaust clever ways of answering questions about hair length, money, fame, regional differences among fans, and Ringo's rings.) Sulpy documents each scrap of silent or sound film down to the second, whether the footage runs twelve minutes or a few moments.

I devoured the book, and dutifully headed to YouTube and the odd online film archives site to re-watch many of these clips. Viewing them chronologically, I was astonished at the consistent level of professionalism exhibited by the Beatles—kids in their early 20s—while dealing with the onslaught from the press and fans. Sure they grew testy with reporters as the tours took them around the world and across punishing time zones, but they remained civil and remarkably patient given how tired and bored they were with the monotony. Of course the guys enjoyed the many—ahem, undocumented—perks of their success, escaping their prison-like hotels for private residences when they could, bedding groupies and basking in the intense adulation and their new-found sex appeal, yet their touring, recording, and promotional schedules were nothing short of brutal, and continued on, grimly, for two more years. That the band would turn out Rubber Soul and Revolver and push against the limits of pop music and expression while being tossed about in the draining hurly-burly of fame and attention never fails to amaze me.

Here are two pages from Invasion!, just another packed day for the band: 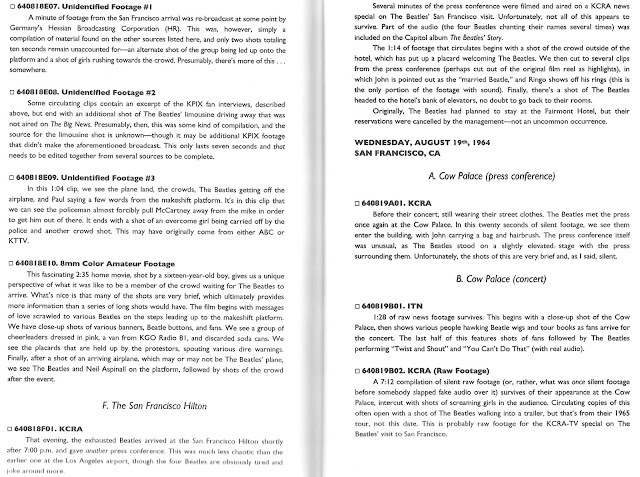 Recently, I virtually sat down with Sulpy to discuss Invasion! The Beatles 1964 Video Guide, forensic approaches to R&R history, and the nuttiness of Beatlemania.

Let's get the inevitable question out of the way, Why another book about the Beatles?

That’s really a question I would never ask myself. I do what I do primarily because I’m passionate about writing about whatever facet of The Beatles’ career interests me. If I had some kind of commercial focus, I’d be writing about Madonna or something. I also have enough confidence in my own ability that I don’t feel threatened by the existence of other books out there on the same subject. I’ve seen a couple of them, as you probably have, and they don’t come close to what I’ve done here, because I made sure I brought the same level of attention to this work as I did to my previous books on The Beatles' audio.

More pointedly, why did you decide to write this book?

My friend Scott Kail, who was there as a sounding board every step of the way, has been trying for years to get me to write a book on the subject, and I’d always said, “I don’t care. I know what they look like.” A couple of years ago, though, I did a special issue of my The 910 that focused on the anniversary of The Beatles’ summer ’64 tour of America. Once I began compiling the video for that project, I suddenly realized that there was so much of it that, when it’s taken as a whole and put back into context, it constitutes a vast block of raw information, much as the hours of audio recordings that leaked out from their 1969 “Get Back” sessions. That excited me, because suddenly I realized that somewhere, in all that footage, lies the truth of what had happened fifty-odd years ago.

You mention in the introduction that you're chiefly interested in a "forensic approach to rock and roll history." Why is that your preferred method? Are there any limitations to such an approach?

I like to tell the story of how, when Ray Schweighardt and I were working on our book Drugs, Divorce and a Slipping Image, we ran into interviews with all four Beatles claiming that George had quit The Beatles in January, 1969 because of a fight he’d had with Paul. The only problem with this is that it’s definitely not true. The argument was with John, instead. So if you can’t believe all four Beatles on something as important as the reason that George quit the group, how can you believe what anyone says about anything, particularly when there’s the human tendency to make their part in the Beatles’ story more prominent than it might have really been. I remember Alistair Taylor, Brian Epstein’s assistant, insisting to us once that they’d dragged the piano up onto the rooftop at Apple and performed “Let It Be” and he knew this to be the case because “he was there!” This kind of thing taught me that the only thing I really trust, both for audio and video, are the things that I can hear and see and, as with my books on their audio recordings, you’ll note that nothing is given an entry in Invasion! that I haven’t actually seen—I guess you could consider that a limitation, but it’s self-imposed.

Were your sources mostly online, or did you a have access to actual film, professional or otherwise?

I was surprised that so much of what I wrote about in the book is actually available on-line somewhere. Much of it is on YouTube, but you can also have a great deal of fun hunting up other footage on the web pages of various film archives. Mostly, though, I used my own video collection, with Scott and others filling in some much-needed missing pieces. Needless to say, there’s more footage out there—but I did everything I could to acquire everything that’s circulating among collectors, and then some.

You offer little editorializing in what is essentially a research book. Having watched and catalogued many hours of footage, what are your takeaways?

How exhausting 1964 must have been for them. Even granting the stamina you have when you’re younger, these four guys worked like hell for their success. But just as much as them, I enjoyed writing about the events surrounding them—the fan interviews and Beatlemania, sometimes, were more interesting to me than watching clips from The Beatles’ actual performances. It was also interesting to watch the excited and energetic Beatles of early 1964 and see how much they change over the course of the year.

You quote a young woman saying revealingly that she doesn't know why she screams and loses it when she sees, or even senses the possibility of seeing, the Beatles. After watching and assembling this footage do you have a clearer understanding as to why "Beatlemania" occurred? Do you have a better feel for its origins and reasons, or is the phenomenon essentially mysterious?

I have a clearer understanding of what happened, but not necessarily why it happened, because the genesis of that was really in 1963, the year before this book takes place. Remember, when they arrived in America in February, Beatlemania was already full-blown—in fact, I’d say it was at its peak. What becomes clear, studying the footage, though, is how real it all turned out to be. It wasn’t hype or publicity at that point, it was already something very special, and unique. And I think that’s why it’s endlessly fascinating to go back and study what happened and try to understand it, as best we can.
Posted by Joe Bonomo at 4:32 PM