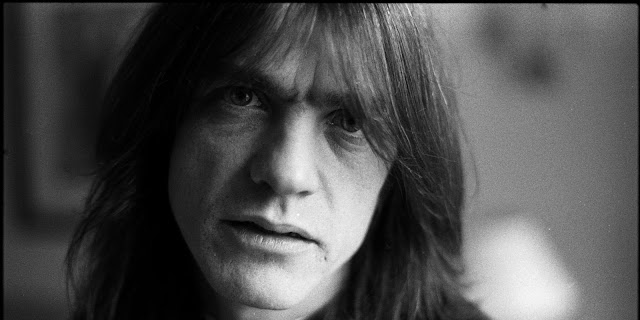 I was saddened to hear about Malcolm Young, who died today at age 64. I can barely recall his voice—he rarely spoke in public, mumbling with a wry half-grin in this interview or that—but his voice wasn't his instrument. His growling and grooving Gretsch rhythm guitar work in AC/DC, from the band's inception in 1973 to his retirement from dementia in 2014, provided the chassis, the foundation, the earth's core, whatever metaphor's right for you, and that Malcolm would roll his eyes at. He simply went to work, with his younger brother Angus churning out one killer riff after another, reinventing Chuck Berry and the blues album by album. At their best, AC/DC's songs were perpetual motion machines, and Malcolm was the one who set them in motion. (If you're scoring at home, Malcolm was usually mixed in the left channel; turn down Angus on the right if you want a layman's course in the properties of engine transmission.) As I wrote in AC/DC's Highway to Hell, "Watch the brothers whenever AC/DC plays 'Highway to Hell.' During the verses, Malcolm stands with his right hand resting on his Gretsch, bobbing his head lightly, tapping his right foot, the job foreman who’s supervising Angus going down the manhole. It’s a job."

Greg Kot in the Chicago Tribune quoted Angus on his brother's style: "In the beginning, we would sort of flip roles, then he took over on rhythm. His rhythm style is a style in itself."


I sit and watch and try to copy him but it’s still not Malcolm. He’s got this amazing left hand, y’know? It’s just so quick, so fast … he’s always three or four moves ahead of us all. The adaptability of it — there’s all the chords I’ll struggle with, and he’s already hitting ’em. And on top of that, he keeps that right hand going, and it’s so smooth that there’s never a note missing. When you look at it, you go, ‘Aw, he’s just filling in spaces.’ But when you look at it closer, you realize he’s not only filling them in, he’s playing in between them. We sound like we do because of him.


And I gotta believe that Malcolm's the author of this killer riff:


At its peak in the late 1970s and early 1980s, AC/DC was a dangerous band, but the danger felt fun and liberating, never toxic or destructive. Malcolm's on-the-job commitment was reassuring. If you were in junior high school as I was when Highway to Hell was released in the summer of 1979, Malcolm gave you hope, even as he scared you. He was small and wasn't great looking, but had the courage and cockiness to climb on stage in front of a bank of towering amps and let it rip with his band, the introverted foot soldier in the background who got smaller as the stages grew in size but who got as many girls as did the crazy singer out front. Malcolm's look was vivid, indelible to me ever since I glanced at the cover of Highway to Hell in Kemp Mill Record Store in Wheaton, Maryland, and caught the look of that guy on the left: "Five bad-ass guys are glaring at me. They’re definitely older than I am, but the guy on the left kinda looks like that kid at school, the one who’s given me problems. He’s got shoulder-length, greasy hair, a skin-tight, dingy white t-shirt on, and he’s wearing hooded eyes that look like he’s really pissed-off or really hungover, or both. He looks like a burnout, one of the public school guys.


But I know one or two of them at St. Andrew’s. The guys with bared-chests and skin-tight jeans who walk up and down the boardwalk at Ocean City, Maryland, cutting through the night salt-air under the lights and past the kids on Trimper’s Rides, trying out moustaches and carrying huge stuffed teddy bears so that the girls will run up to them and go awww. The guys cruising up and down Coastal Highway in Trans Ams? He looks like one of those guys. Kinda scary, actually. I’d never talk to them. The two guys in the back must be his buddies. They look like they want to sell me something. Or buy something.

Malcolm had battled alcoholism for many years, but sobered up in the late 1980s. His dementia, as it is in all cases, was crippling, and sadly, bafflingly diminishing. The man who co-wrote such vivid and graphic rock and roll songs couldn't remember them anymore, let alone those written by his heroes. I'll crank "Bad Boy Boogie" and "Hell Ain't a Bad Place to Be" and" Riff Raff" and "Girls Got Rhythm" and many other Malcolm-steered classics tonight and raise a glass to Young's workmanlike, utterly necessary guitar playing, and to his ambition, commitment, and the fun he gave me and millions of others.

I'm not sure where Malcolm is now, but I know that he's plugging in somewhere. Maybe his older bro George is watching. And his old buddy Bon's been waiting for him for thirty-seven years. He can't wait to remind him that hell’s got a rocking band, while heaven's stuck with harps. RIP Malcolm Young. 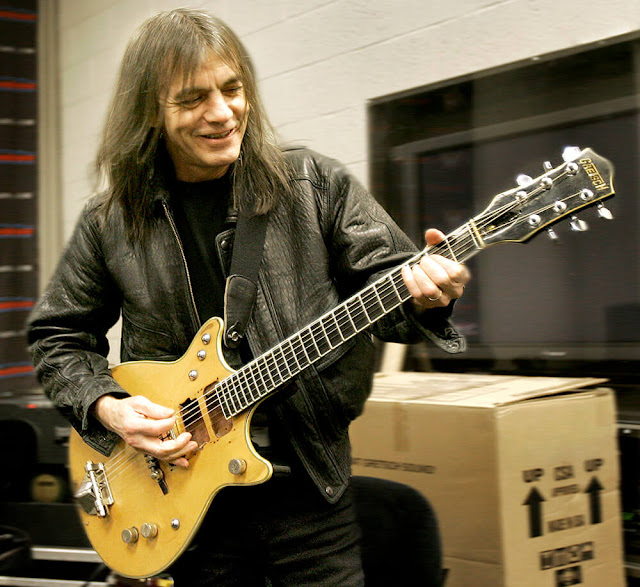 Great write-up. I'm from MD too and know exactly what you're talking about, from the glowering Malcolm on that LP cover to the dudes in Ocean City. RIP.