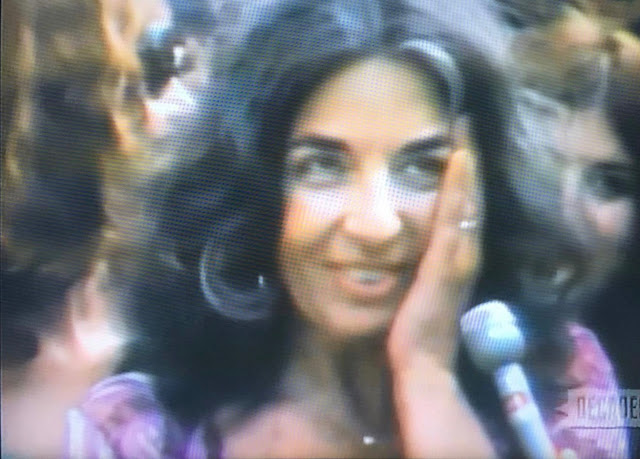 I'm in love with this ticket-scalper-buying housewife from Westchester County who comes in on her own to see the Rolling Stones at Madison Square Garden on July 25, 1972. She was among the fans interviewed outside of the Garden by Dick Cavett for a special episode about the Stones' NYC shows, broadcast on ABC on August 11.

I really hope that she went to a bootleg showing of Cocksucker Blues later.


Dick Cavett: Are your children with you?

Woman: No, they're at home.

C: Where are you from?

C: Are you a housewife?

C: And you're going to the concert?

DC: How did you get tickets? And how many?

W: I bought one off the street.

DC: Hold on to it, because people have been known to get them away from people.... Are you going or are your children?

W: No, I am. They're going tomorrow night.

C: Do they know you're here?

C: Is your husband a Stones fan?

W: And my children really turned me on to the music and that's why I grew to love it and that's how come I'm here. Oh, I feel foolish! [laughs]

C: You shouldn't feel foolish. Do you have a poster of Mick Jagger up in the kitchen or anything?

C: Would you want to meet Mick Jagger? I can't arrange it, but if you did do you have any idea what you'd talk about?

W: I have a son that reminds me of him. [laughs]

C: But Jagger's twice that old!

W: Ah, just something about him reminds me of him. I have a few children, and he's just different from all all the rest.


Screen grab of The Dick Cavett Show via Decades
Posted by Joe Bonomo at 11:38 AM