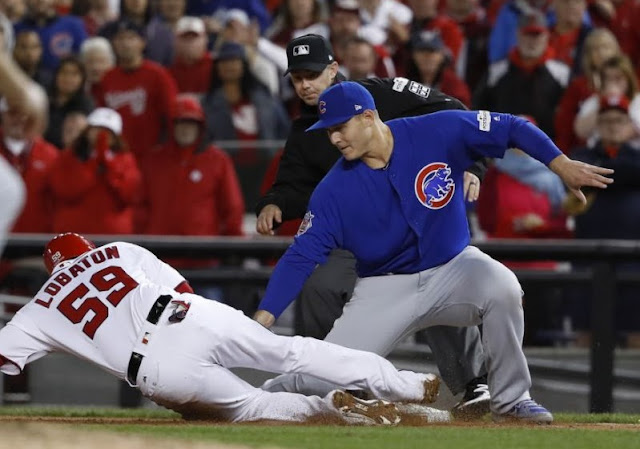 Major League Baseball should be ashamed of itself. The replay decision that overturned the on-field, rally-killing call of Cubs catcher Willson Contreras's pick off of the Nationals' Jose Lobaton was a disgrace. Among the pleasure of watching sports is seeing athletes hurl their bodies through air and control those bodies in elegant, often breathtaking ways. "Professional sports have a powerful hold on us because they display and glorify remarkable physical capacities," Roger Angell wrote, "and because the artificial demands of games played for very high rewards produce vivid responses,” Athletes are bigger, quicker, stronger, and more agile than I am or will ever be; watching them play at the elite level, I expect that they'll test their limits in entertaining ways. One of the remarkable aspects of baseball is how well-designed the game is: the dimensions on the field, notwithstanding the varying distances of the outfield fences and the recently (1969!) lowered pitching mound, have remained unchanged for decades. It's astounding that a player in 1923, after hitting a grounder to third, would hustle down the first base line and just beat—or not—the throw to first, and that his larger, faster, and stronger counterpart in 2017, hustling, in theory, still faster, would also face a split-second decision at the end of that same ninety feet. What a perfectly designed game!

When a player dives back to first in response to a lightning-quick pick-off move, he hurls his body through air, and occasionally his foot or leg will come up off the bag even after he's arrived safely. That's physics. That's poetry. It's not a mistake. It's a body moving through space. Instant Replay should be used to reverse bad calls and obvious mistakes made by the umpires and players—it should not be used to penalize a player for being six feet and an inch and weighing 205 pounds and, against gravity and with brutally-honed instincts, lurching to his left to touch a bag and—for an instant—lift off.

Simply because we have the ability to micro-zoom and freeze a chaotic moment of intensely competitive sport, must we apply it on every occasion? Baseball is played by humans and umpired by humans; must technology supplant the naked eye on the occasions where a leg lifts off of a bag for a slit-second of time after the runner clearly reached the bag, as observed by the first base umpire from a few feet away? Baseball is applying an unprecedented, hyper-realistic standard of physical play if it permits replay on such microcosmic instances of athletic competition. It does a disservice to the talented, hard-working players and umpires, to kids watching, to fans, to the game. I know it's unlikely that replay will be refined, but I hope that in this off-season someone in New York suggests a re-think. The game is too beautiful to be policed—reduced—by a high-definition camera. Let 'em play.

I was texting with my brother, who was at the game and didn't have access to the replays I was watching. I thought I'd cool off about this overnight, but nope. 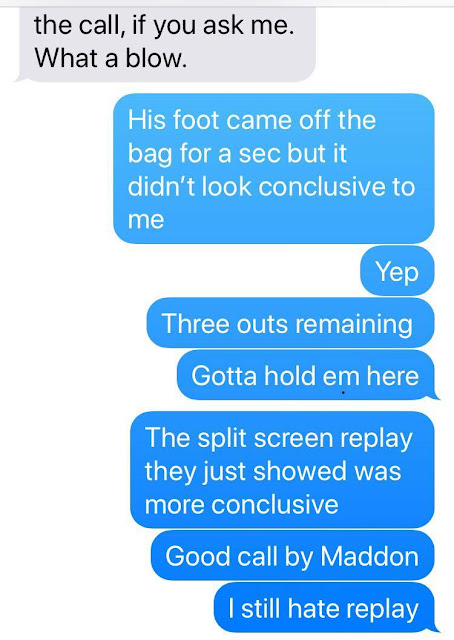