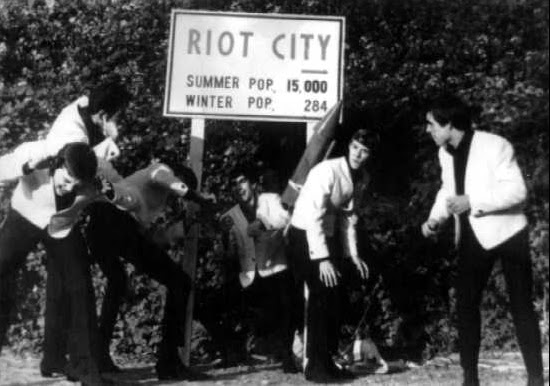 I've always loved the brutally raw sound of Rocky and the Riddlers' garage stomp "Flash & Crash," released on the Seattle-based, Jerden-affiliated Panorama label in 1966. Recently, Ric Ulsky, who played organ on the song, contacted me at my YouTube channel, 3 Chord Philosophy. I asked him for any memories of the session:


I remember it being very exciting. An actual recording studio! Wow! Plus I was the youngest member of the band so I was even more excited.﻿ It was 1966 technology. I believe we were in a 2 track studio downtown Seattle. Jerry Dennon was the Producer, I'm pretty sure. Carnie Barton was the engineer, I think. Hell, he was old then. He just sat there reading the paper and eating an orange. I was playing a Farfisa through a 147 Leslie and a Sears and Roebuck Silvertone amp. Hell of a rig for those days.

Hell of a sound. Turn it up, if you dare.

Photo of Rocky and the Riddlers via Pacific Northwest Bands
Posted by Joe Bonomo at 5:14 PM