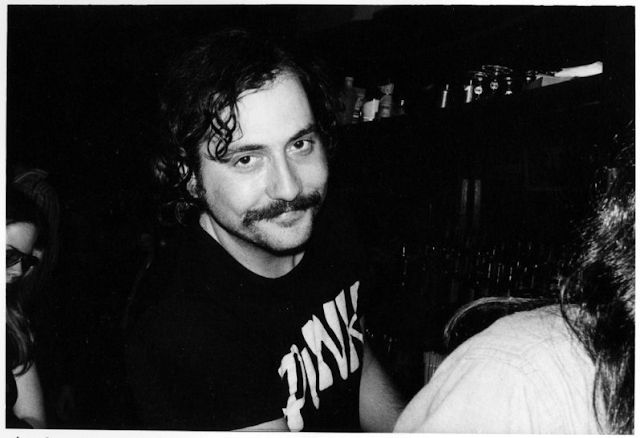 
Punk is oblivion when it isn’t any fun and unlike winos you do have a choice in fact; you're young.
Punk is bleared out of your mind watching Lancelot Link at 12 noon on Saturday and having no idea of what you're seeing.
Punk is vomiting all over your “motherfuckers”/ John Sinclair liner notes version of Kick Out the Jams and not particularly caring.
Punk is ten thousand tattered skin magazines under your bed but never getting any satisfaction from masturbation not the kind that leads to languorous rest anyway so you exist on a thin hot prostate wire of tension and jack off three, four times a day, knowing it’s stupid and pointless and hating it for that more than submerged guilt but doing it because there’s nothing else to do but get drunk.
Punk is finally getting a girlfriend and then treating her shitty because you’re too stupid, drunk, and self-absorbed.
Punk is not punk, because it has become too codified. Punk is sitting in a half-dark room alone wishing you had Valiums with an indifferent record playing wanting to claw the stuffing out of the chair but feeling futility in your fingernails.
Punk is hating poeticization of your condition.
Punk is vague dreams of carnage and bloody revenge when you can barely swat a comatose ﬂy.
Punk is pointlessness.
Punk is ripping up articles like this one. Punk is lacking the energy or interest to bother ripping them up. Punk is reading this article mechanically because there’s nothing else to do and the words glide by like cinders. Punk is hurling the magazine across the room, dropping your hands into your lap, idly scratching your dick or clit wondering if you wanna jerk off again, deciding it’s not worth the trouble, staring blankly into space.
Punk is thinking maybe we should go to the movies tonight and not having the energy or self-discipline to get up and walk across the room to pick up the daily paper.
Punk is talking back to situation comedy rerun syndicated characters on afternoon TV. Punk is seeing girls in TV commercials and croaking “Take off yer clothes . . .” when you haven’t been laid in two years.
Punk is running out of beer at 5:30 A.M. and taking three Chlor-Trimetons to see if they'll exacerbate what’s left of it.
Punk is putting on a record you love, lying down on the couch, rolling over and trying to go to sleep at four in the afternoon or seven at night just because you want that state of twilight consciousness which is better than drugs.
Punk is laziness at apogee with no apologies.
Punk is saying fuck rock ’n’ roll.
Punk is saying fuck punk rock.
Punk is treating your 2,000-plus LP collection like dirt.
Punk is passé.
Punk is just a word dug by media.
Punk is anything you do that should have consequences but either doesn’t or you ignore them.
Punk is a meaningless word that everybody is sick to death of purporting to represent a state of mind and lifestyle which while not so very complex cannot be reduced any further than it has been already in inchoate preverbal practice.
Punk is something worth destroying posthaste. Hopefully this article will speed that process.