In 1980 Lester Bangs wrote Blondie, a idiosyncratic biography of the band then riding high on the commercial wave of "Call Me." Bangs famously cared little for the book that he saw as a hack-work project to make some dough. (You can find decent-priced copies at Amazon and elsewhere.) Neither Greil Marcus nor John Morthland excerpted Blondie in their respective collections of Bangs's work, though Marcus acknowldges the book is "scabrous" and "crackling."

In 1992 Clinton Heylin did, in his criminally hard-to-find Penguin Book of Rock & Roll Writing. In the passage Bangs revisits a favorite topic, the anti-virtuosity of great rock & roll, its democratic call to arms to anyone with the nerve and style to pick up an instrument. By 1980, Bangs had traversed this subject many times, but it's always great to listen to the man hold forth on the lo-fi power of rock & roll and punk. "The point is that rock & roll, as I see it, is the ultimate populist art form, democracy in action, because it’s true: anybody can do it," he writes.


Learn three chords on a guitar and you’ve got it. Don’t worry whether you can "sing" or not. Can Neil Young "sing"? Lou Reed, Bob Dylan? A lot of people can’t stand to listen to Van Morrison, one of the finest poets and singers in the history of popular music, because of the sound of his voice. But this is simply a matter of exposure. For performing rock & roll, or punk rock, or call it any damn thing you please, there’s only one thing you need: NERVE. Rock & roll is an attitude, and if you’ve got the attitude you can do it, no matter what anybody says. Believing that is one of the things punk rock is about. Rock is for everybody, it should be so implicitly anti-elitist that the question of whether somebody’s qualified to perform it should never even arise.

But it did. In the sixties, of course. And maybe this was one reason why the sixties may not have been so all-ﬁred great as we gave them credit for. Because in the sixties rock & roll began to think of itself as an "art-form." Rock & roll is not an 'art-form"; rock & roll is a raw wail from the bottom of the guts. And like I said, whatever anybody ever called it, punk rock has been around from the beginning—it’s just rock honed down to its rawest elements, simple playing with a lot of power and vocalists who may not have much range but have so much conviction and passion it makes up for it ten times over. Because PASSION IS WHAT IT’S ALL ABOUT—what all music is about.

In the early sixties there was punk rock: "Louie, Louie" by the Kingsmen being probably the most prominent example. It was crude, it was rude, anybody could play it, but so what? It’ll be around and people everywhere will still be playing it as long as there’s rock & roll left at all. It’s already lasted longer than Sgt. Pepper! Who in the hell does any songs from that album anymore? Yet, a few years ago, some people were saying Sgt. Pepper will endure a hundred years. 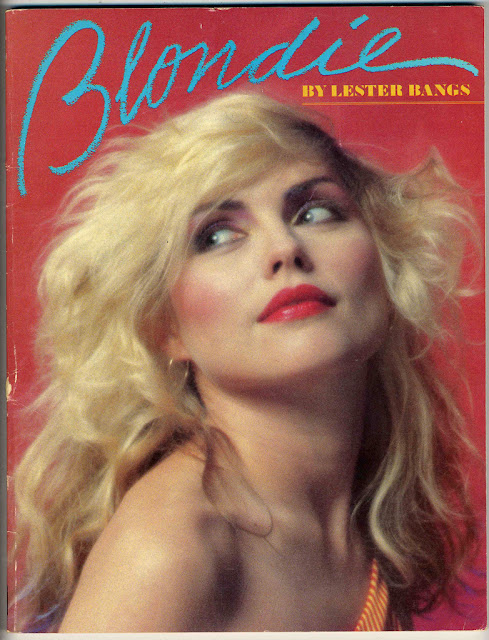 Photo of Lester Bangs via San Diego Reader; photo of Debbie Harry via Medium.
Posted by Joe Bonomo at 9:54 AM