"This is fucking awesome" 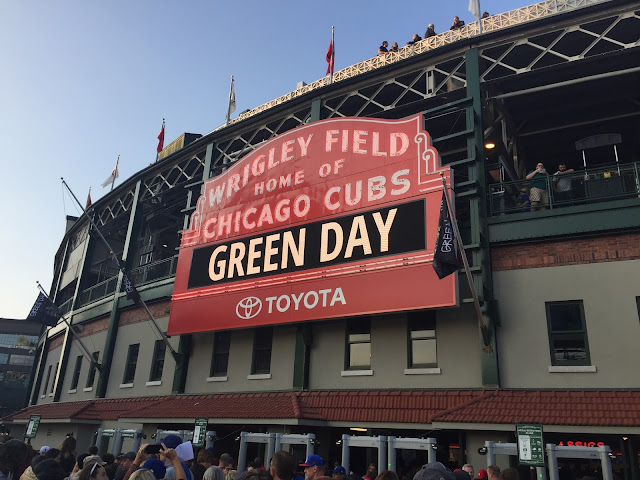 DOWN AT THE ROCK & ROLL CLUB—For years, I'd been deeply skeptical that Green Day could play a show in front of 40,000 people and make the experience feel intimate, could topple the figurative wall between enormous stage and enormous crowd. They made a believer of me last night at Wrigley Field.

I'd never expected to see Green Day. Although I've loved the band since the mid 1990s, I'm a bit of a fameist, and rued that I'd missed my chance to see them in a small club or theater. (I was unable to snag tickets to the band's show at Aragan Ballroom last October.) But when my pal Dave scored free tickets to the Wrigley show and generously asked me along, I couldn't say no. Our seats were near the end of the right field line, lower deck—during a game we'd have been within heckling distance of Cubs right fielder Jason Heyward. The view, it turned out, was pretty terrific; yes, to be in the pit in front of the stage would've been intensely great, but our seats' long view gave me the perfect opportunity to see if Green Day could indeed command a stadium.

They could and, every night, they do. Since around the time of the Nimrod, I've watched video of Green Day perform at enormous stadiums around the world, and I've doubted that a show like that could match the intimacy of a small venue or theater. I saw the Rolling Stones (second row!) and the Who in the early 1980s, and both shows were highly memorable, but were just on the cusp of my exploding love for indie and punk, for bands whose gigs take place in small, sweaty places—and it's there I was truly baptized a rock and roll fan. I hadn't seen an stadium-size show since then (though, in retrospect, I should've put my anti-arena bias aside and gone to see the Kinks, David Lee Roth-era Van Halen, Tom Petty, Bruce Springsteen, and a few others). Green Day's show began with the mock-heroic triumvirate that's kicked off each show on this tour: Queen's "Bohemian Rhapsody" and the Ramones' "Blitzkrieg Bop"—originally recorded five months and a galaxy apart, here sharing anthemic spectacle—followed by Ennio Morricone's The Good, the Bad, and the Ugly theme blaring over the PA. Soon after, Billie Joe Armstrong, Tré Cool, and Mike Dirnt darted onto the stage and kicked off "Know Your Enemy." Within a verse, Armstrong showed that he was regarding the crowd: he yanked up a guy from the pit who took over for a verse (after a big bear hug for the singer). When the song was over, Armstrong counted down and the kid took off down the ramp, leapt into the pit, and crowd surfed.

And this was still the first song. Armstrong did this twice more, hauling up a young boy to sing a verse of "Longview" (You're fucking lonely! included) and then sending him into the crowd to surf—he looked like a tiny cork on a sea—and then another guy to shed some guitar during the cover of Ivy Operation's "Knowledge," the once-in-a-lifetime opportunity inspiring the guy to run up and down the drum riser and to ape the end of the song. Twice. (The band happily obliged, and then security hustled him off.)

Now, I follow setlistfm; I know that Green Day has featured these "spontaneous acts" at nearly every show since the late 1990s, but there was no denying the thrills and laughter that those audience-participation stunts generated, a feeling of good will and humor that hummed throughout the park, all the way up into Section 240, where I sat with a dumb grin on my face. I rolled my eyes at the thirtieth "Hey-oh, Hey-oh" call-and-response that Armstrong bellowed from the stage, the one-too-many "HELLO CHICAGO!" arena cliches, and the overly-elongated songs—but this morning, an odd thing happened: I awoke and remembered them all fondly. Armstrong knows that those telegraphed, well-worn giant-stage gestures work, and that when they work, accompanied with the fireworks and the flash pots and the light show, the crowd feels involved and spirited, and when the crowd feels involved and spirited, every song sounds better, every solo sounds inspired, every beer tastes better, all of that fun accumulating as the long night goes on. Armstrong is tireless; his and his bandmates' stamina are magnificent, and the band's willingness to play long and hard is tribute to their affection and respect for their fans and the great time that they want, and pay for.

Ideally, I'd like Green Day to play a two-week residency at, say, the Empty Bottle (capacity of a couple hundred) so that I could experience the band up close and watch Armstrong field a smaller venue. Those days of small clubs are long gone for Green Day, and I stupidly lament that, though I don't fault the band their mammoth success. (Selena Fragassi, reviewing the show in Chicago Sun-Times, shares my sentiment: "Though Green Day is anthems away from playing the small clubs anymore, it still makes one wonder if returning to places like Metro (which hosted a one-day pop-up shop across the street) just might be the most punk rock thing ever for a band that has gotten very used to the big time.") Yet, remarkably, Green Day played not just a great stadium show last night, but a great rock and roll show, with hooks, spectacle, anthemic choruses, grins, a well-paced roar of songs with the proper ebbs and flows. I knew in advance that "King For A Day" was going to blend into the Isley Brothers' "Shout"—the band's been doing that for years—but I was dubious about "Shout" blending into the Stones' "Satisfaction" and then into the Beatles' "Hey Jude," warhorses all. Yet at that point in the song, three quarters of the way through the show, Armstrong, lying on his back, implored the crowd to fuck politics and fuck Neo Nazis and fuck hate speech and by extension fuck Trump, and as he sang "take a sad song and make it better," with his eyes shut, he looked a little embarrassed at the song's shopworn sentimentality, but also probably how he looks at home on the floor, alone, singing a song that he digs no matter how "classic" and overplayed it might be, no matter how many strangers love it for different, corny reasons. It was the most intimate moment of the night—a pretty remarkable occasion considering that he's lying on the stage in front of thousands of people. It led warmth and texture to everything that came and everything that followed.

Yeah, the giant screens help—but even in the right field stands I felt, as undoubtedly many in the crowd did, that I was crashing on the stage alongside him.

On the day of the show, Rolling Stone published an article written my buddy Dan Epstein about Turn It Around: The Story of East Bay Punk, a documentary directed by Corbett Redford focusing on 924 Gilman, the nonprofit Bay Area club which spawned Green Day and many other punk and indie bands in the 1980s and 1990s. (Snippets from the film played on the screen before Green Day took the stage last night.) Infamously, Green Day experienced backlash from bands and figures of the small but intense Bay Area scene when they signed to a major label in the 1990s, enmity that only increased as the band experienced major success and ultimately a Broadway adaptation of their most popular album. (I saw American Idiot in 2011 and found it surprisingly moving). Armstrong told Epstein, "There was a very vocal few that sort of blew it out of proportion and we felt it. But I think the majority of the people in the scene were wrapped up in their own lives, and doing their own thing, you know? Most people were just like, 'You're going your way, and I'm going my way'." Still, I couldn't help but think about the many miles that Green Day's trekked from playing Berkley back yards and garage shows in front of dozens to enormous stages in front of millions around the world. Back then, Armstrong and others on the scene surely loved the Isley Brothers, the Beatles, and the Stones, but would they have admitted it, or played their songs in way but ironically? Last night, Armstrong, a genuine ham but also a genuine rock and roll fan who gets it, ran that line of Sixties classics with love, affection, and an instinct for pleasure. "This is fucking awesome," he said at one point last night, surveying the phone-lit crowd and ancient Wrigley. "Let's just celebrate this." 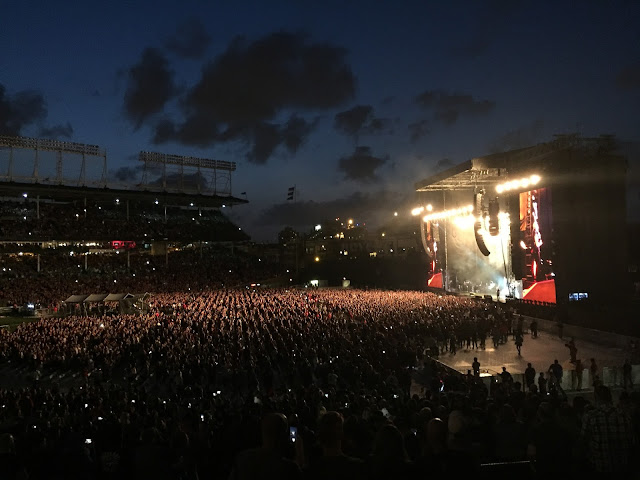 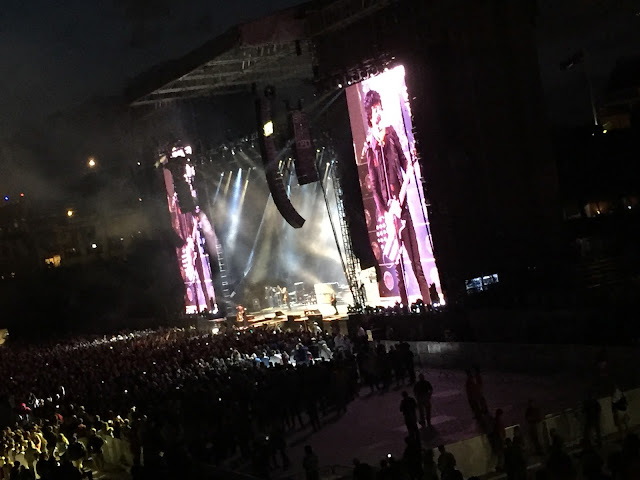 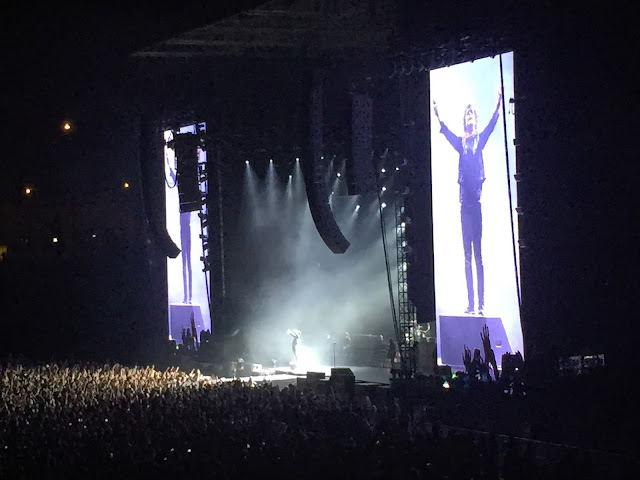 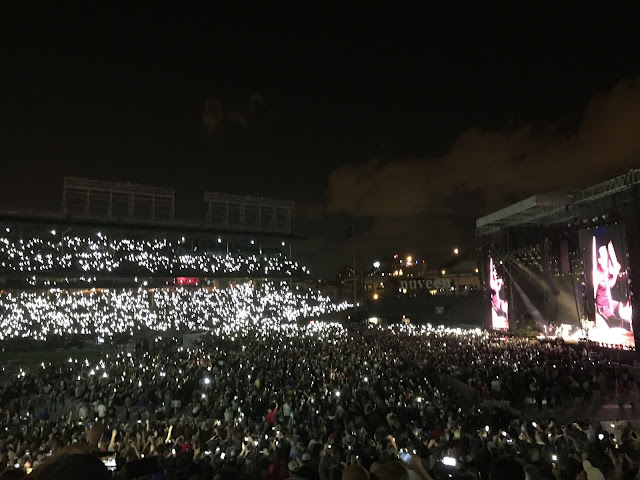 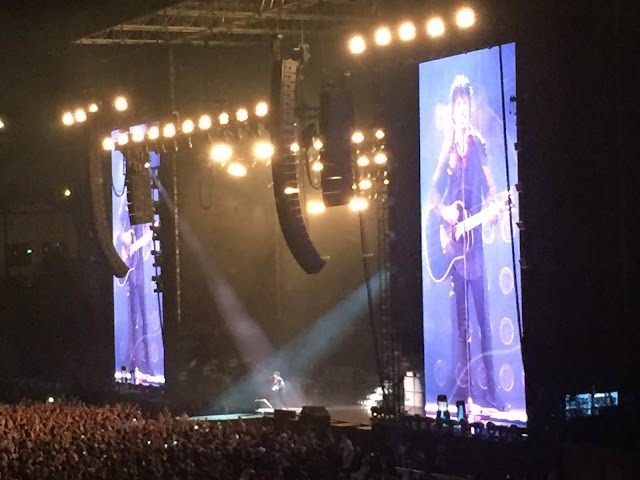 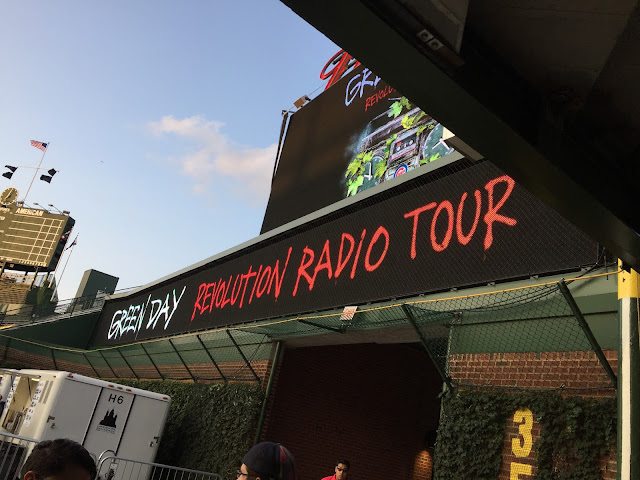 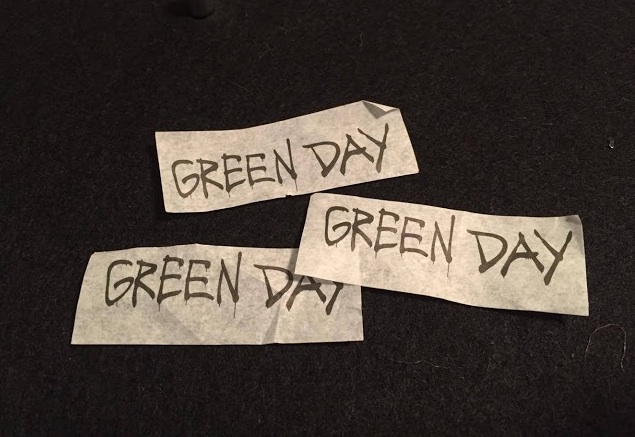