No Heroes: Lester Bangs on Stage 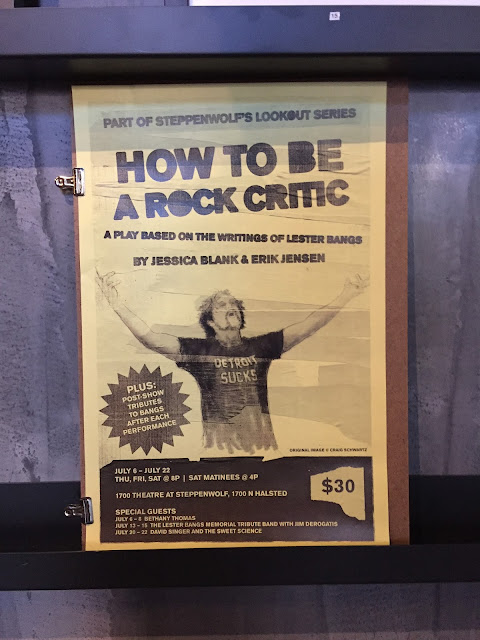 Jessica Blank and Erik Jensen's "How To B A Rock Critic" begins with Lester Bangs on the toilet. Thankfully, we don't see this; we hear Bangs, played by Jensen and directed by Blank, offstage, cursing a lousy order of Kung Pao Chicken, and then a toilet flushing. Enter: Lester, opening random cans of sudsy Schlitz, and bitching about a deadline and writer's block. We're facing Bangs's apartment, a mess, with a couch at center stage flanked by a chair, ottoman, and a writing desk stage right, and a messy table on which sits a stereo, stage left; strewn across the stage are many albums—some crated, most in towering stacks—, several cough syrup bottles, tossed books and magazines, the requisite open Chinese food takeout box on its side. The production at Steppenwolf Theater is very intimate; 1700 Theater is tiny, and at the Saturday matinee we attended I counted twenty heads as the lights went down. Jensen used this nearness to address the crowd, first imploring us to remain in the hall outside his apartment, then tossing audience members beers and (era-appropriate) copies of People and Rolling Stone magazines to read before he settled in, took a deep breath, belched, and launched a ninety minute monologue/rant/statement-of-purpose about music and writing about music and the appeal and despair of both, with occasional backward-looking glances to his fucked-up childhood and adolescence, a fractured account of his move from California (where he wrote for, among other outlets, Rolling Stone) to the Lower East Side (Village Voice) via Detroit (Creem), and random spins of his favorite records—the Troggs, the Count Five, the Carpenters, the Velvets, the Stooges, the J. Geils Band, the Ramones, Van Morrison—all the while sipping beer, swilling Romilar cough syrup, and chugging straight gin. Jensen being Lester being Lester.

I'm not exactly sure what "How To Be A Rock Critic" is, or who it's for. Bangs apostles who attend  will likely find themselves in one of two camps: among the Besotted, nodding along in recognition of the play's lines and the stories adapted from Bangs's work, and getting off on Jensen's tightly-wound portrayal of the sloppy hero made flesh; or the Skeptical, in love with Bangs's words and his charged calling, but doubtful of the need to dramatize them so theatrically. Those new to Bangs or only slightly familiar with him might feel as if they're trapped, lectured by a well-meaning blowhard. In a way, each response is valid, as each registers somewhere along Bangs's character and intentions and the reactions that his writing—and his oversized personality—often got.

If there's a narrative arc in the play, it's Bangs's search for Van Morrison's Astral Weeks album; he's literally looking for it throughout the play, promising the audience that they'll love it if he can just find the damn thing, and also figuratively searching for the momentary transcendence that that music provided, and might again. The play is also book-ended by Bangs's narrating of two events he witnessed: when a groupie was viciously attacked by a Hells Angel member during an orgy; and when a fourteen-year-old fan of the Clash was assaulted by a member of the band's retinue. In both cases, Bangs did not intervene. Jensen plays these two accounts as sources of great guilt and shame for Bangs, who seems to find a parallel sense of ennui and helplessness in the face of corporate rock and bloated professionalization of rock criticism of the early- and mid-1970s pre-Punk era. As Bangs often did, Jensen moves between ecstasy and despair—he foams at the mouth, leaps about, jumps on the coffee table and the stacks of records to make his points, and ends the performance dissolute, drunk, and high, nodding off on the couch as Van Morrison album  plays. In a nice bit of directing, the album jump-cuts to the last song, stuck in a perpetual skip as the play ends.

People who knew Bangs well said that he could be a blowhard and a loudmouth bore, that he could be mean, especially when drunk or high, and that you often felt like a captive audience when he was holding forth. That sense of being stuck with an ecstatic as he proselytizes and careens between sincerity and bombast is well dramatized in the intimate space of the 1700 Theater, and Jensen milks his center-of-attention status well. Bangs could be annoying; so is Jensen playing Bangs. Bangs was also brilliant, talented, funny, and deeply-caring; Jensen moves among those poles, as well. 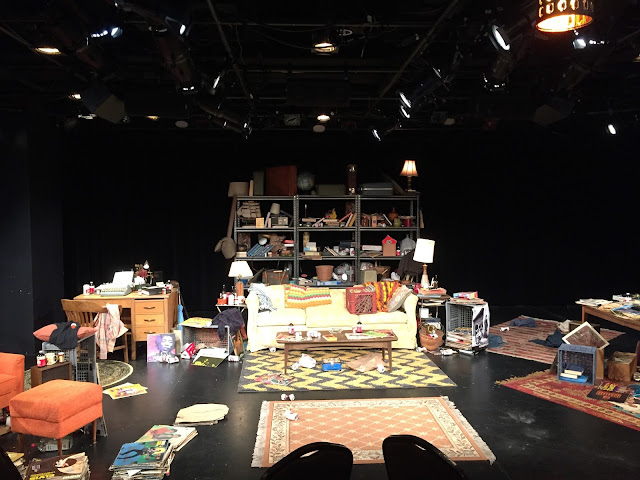 Can the call to writing be dramatized? (Should it be?) Do we really need more Bangs Myth thirty-plus years after his death? Didn't he provide enough of that when he was alive, and haven't his followers stoked the legend? Jim DeRogatis's terrific Let It Blurt (2000) and Raul Sandelin's 2013 documentary A Box Full of Rocks: The El Cajon Years of Lester Bangs are sturdy, clear-eyed takes on his biography, but Blank and Jensen seem interested in the Theater Of Bangs, the dimensional space that his writing inhabited in all of its hyper-energy and essayistic galloping about. These are Bangs's words and rambling sentences; it's up to Jensen to adapt them and to act them. For the most part, actor and director succeed in dramatizing Bangs's mania, which was both genuine, and fuel for his self-conscious persona. A few times the production stumbles: Bangs's epiphanic moments of reflection are precious and often telegraphed, Blank making Bangs's unhappiness and depressive hopelessness obvious. Bangs was rarely subtle, a personality trait and writerly aesthetic he seemed to lack or be deeply skeptical of, but often on the page, especially in his more autobiographical writing, the energy and drive of his sentences did as much to describe his ill-fated mania as do Jensen's wounded, over-the-shoulder glances to the audience.

Blank and Jensen also get it right, most often when Bangs holds forth about the music he loves. His description of driving around with a blissy, spaced-out girlfriend as the Troggs's "Wild Thing" plays on the radio wonderfully captures the way that simple, unadorned rock and roll—Bangs's favorite kind—can open doors into very complex rooms. Near the end of the play, as Jensen's admirably-paced alcohol- and cough syrup-high is cresting, Bangs takes on Elvis, persuasively proving that the boy from Tupelo who seemed to come from outer space was both a local turd and a larger-than-life force of nature. Why can't he be both? Bangs wonders. (I bristled at Jensen's mimicry of Elvis's moves as Bangs imagined eating the drugs from Presley's intestines after Presley died; it's one of Bangs's greatest, most insanely inspired riffs and Jensen's play-acting trivializes it.) Before he nods off to Morrison's "Cypress Avenue," Bangs ruminates on the power of music that once gave him a glimpse into something remarkable, something that refreshed him and gave him hope. His confessing to spending the rest of his life trying to rediscover and renew that moment is the most potent and moving dramatization—and description—of Bangs's life and career that the play achieves.

As any fan of Bangs's writing knows, even in his pay-the-rent shitty album reviews and profiles, he was rarely writing just about music; he was writing about what it means to be a living, breathing human who didn't choose to be here and is now stuck looking for justification. Bangs writes about how being alive blows and is also the greatest gift—45s and album cuts were simply the moving parts that got his words to the page. 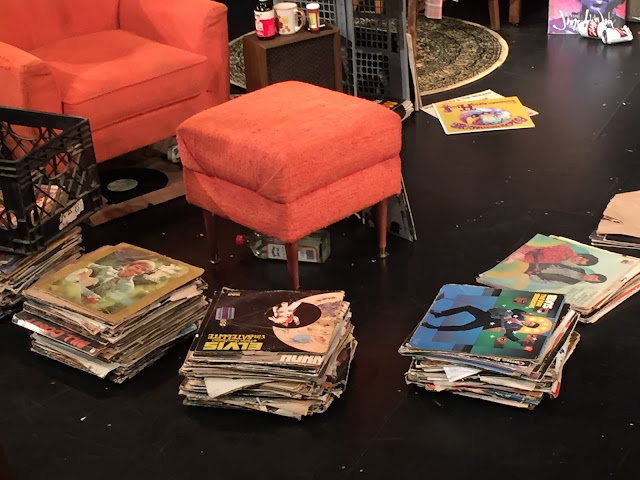 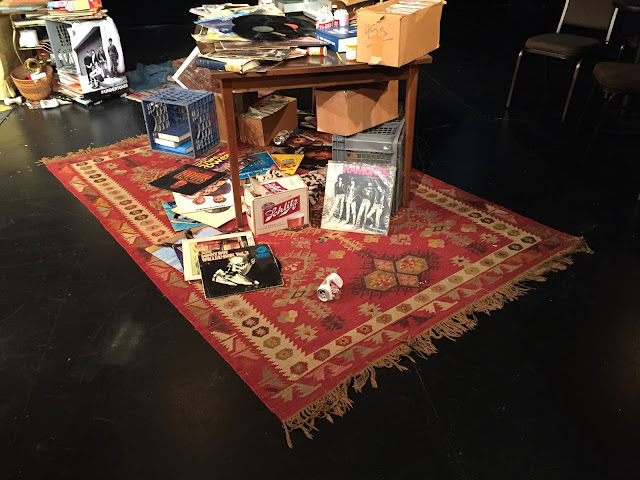 Still, I'm on the fence, somewhere between my gratitude for Blank and Jensen's commitment to a great writer and my my skepticism about whether music writing can be fully dramatized. After the performance, I wondered half-seriously if maybe the best thing Blank and Jensen could've done would've been to have Bangs sit on his couch, drink, get high, and play the entirety of the Carpeners' Close To You or all four sides of Lou Reed's Metal Machine Music while half-grinning, leering, and crying. (Bangs on MMM: "As a statement it's great, as a giant FUCK YOU it shows integrity—a sick, twisted, dunced-out, malevolent, perverted, psychopathic integrity, but integrity nevertheless.") Not saying a word. He's staying here. After all, we've got his books. 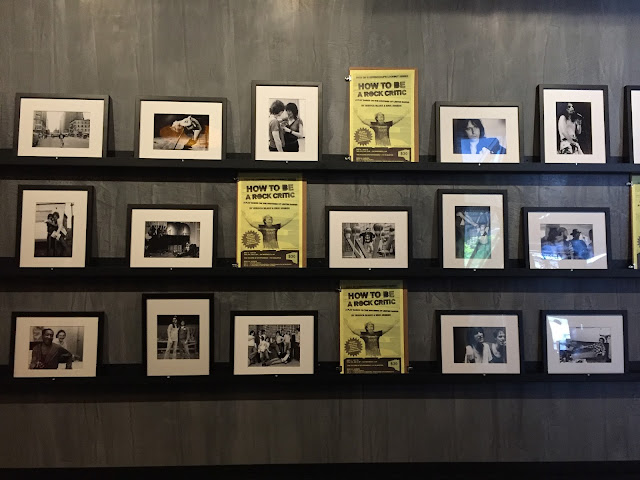 Photo of Jensen onstage via The Artery (Courtesy Craig Schwartz/ArtsEmerson)
Posted by Joe Bonomo at 12:26 PM