A Tourist at Home 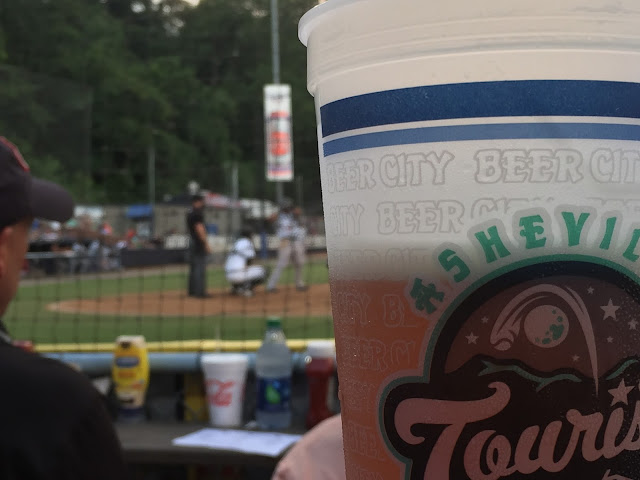 Amy and I hung out for several days in wonderful Asheville, North Carolina, where we took in a Tourists game. The Class A team for the Colorado Rockies, the Tourists play their home games at McCormick Field, where the history is palpable. Teams have played under the Tourists name dating back to 1897; the current team has played in the South Atlantic League since 1976. The curious "Tourists" name was adopted sometime in the 1930s—an earlier team had been called The Moonshiners, which I prefer! In the 1940s, the Tourists shared the park with the Asheville Blues, an independent Negro Leagues team.

McCormick Field opened in 1924, and was renovated in 1959 and again prior to the 1992 season. A mostly concrete structure now—the old wooden roof was leaking badly—the park is still intimate, cozy, and, nestled in the green mountains, with houses right across the street, fantastically homey. The whole thing feels like it's tilting (in a good way). As night fell and the outfield lights came on, the trees were illuminated in such a way that a home run ball hit to right vanished in the trees, giving the impression of a bright mythic sphere consumed by the dark. Good beer is plentiful in the park, as throughout all of Asheville, terrific local brews (my fave that night was the Hi-Wire Hi-Pitch Mosaic IPA), and the mood was convivial and family-friendly, without being sentimentally cloying or stuffed with distractions, save for the fun, Minor League kind: kids running bases between innings, groups of them leap-frogging in giant underpants or racing the mascot. One kid a row over from us took a shot at predicting the speed of the first pitch of the following inning. He called 87, and had three chances: the first three pitches were clocked at 88, 89, and 86. Everyone around us laughed. Baseball's hard.

Perusing the game program, I learned about the team's and park's history, including the impressive number of Tourists who've ended up in the Majors, most for a cup of coffee, a few for a Hall of Fame career. The coolest fact I learned was that Cal Ripken Jr.'s father—that would be Sr.—managed the Tourists for a spell in the 1970s, and young Cal was the batboy. Right after I read this, I saw the Tourists' current ball fetcher run onto the field to claim a ball or a bat, and I pictured Cal—skinny, little, wide-eyed—in this boy's place. Modest moments of history, transposed one on the other like that, are among the deep pleasures of taking in a baseball game at an old park. 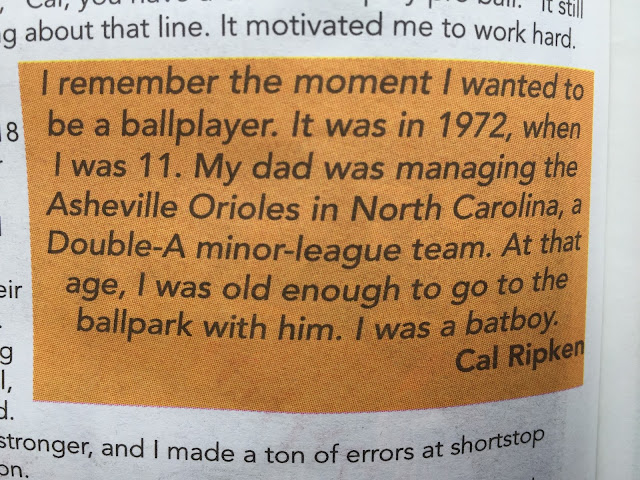 The Tourists won in a bit of a laugher, 12-3. The Augusta GreenJackets' catcher had a rough night of it, both behind and at the plate, and the Tourists' middle infielders, second baseman Carlos Herrera and shortstop Jose Gomez, threw some mighty impressive leather. I'll keep an eye out for them. Nearly all of the crowd of 2,300 stayed until the end of the game.

Beforehand, as we were descending the hilly lot where we parked—for free—an attendant asked if we'd ever been to McCormick Field. We said No, and he gave us each a "My First Tourists Game" button. Can't wait to get back. 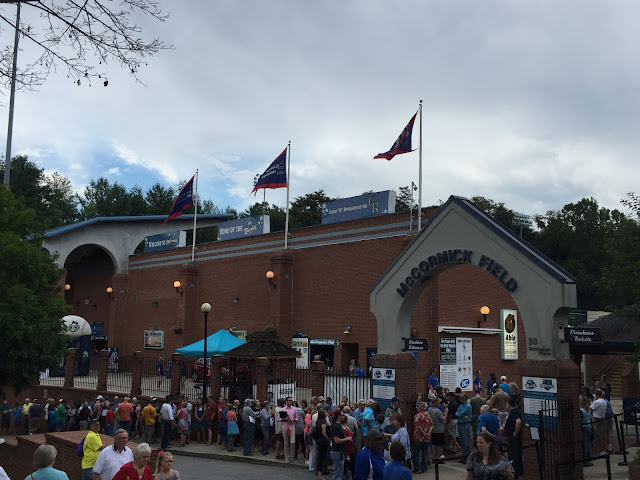 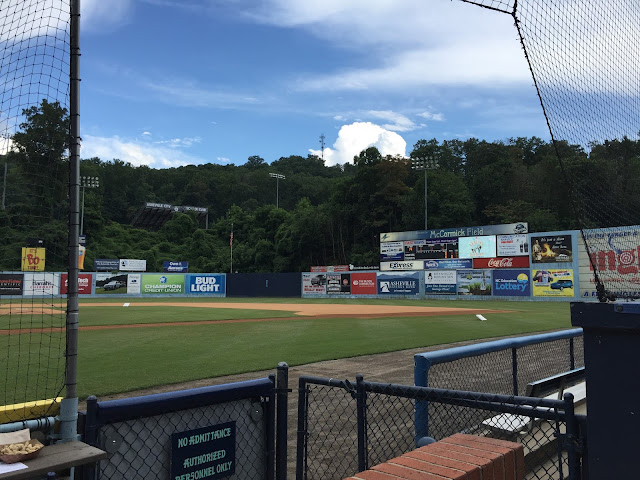 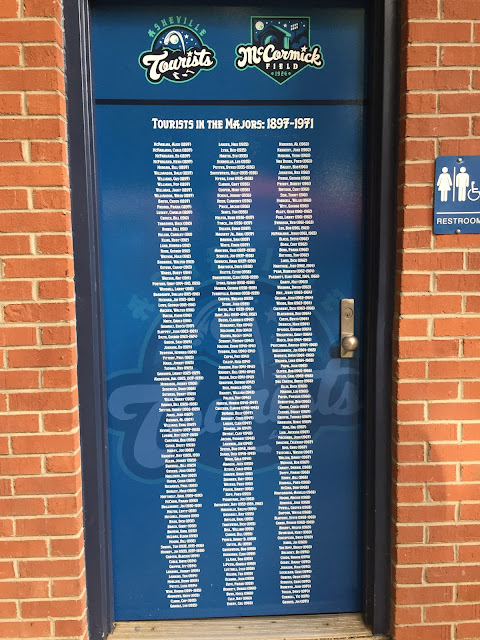 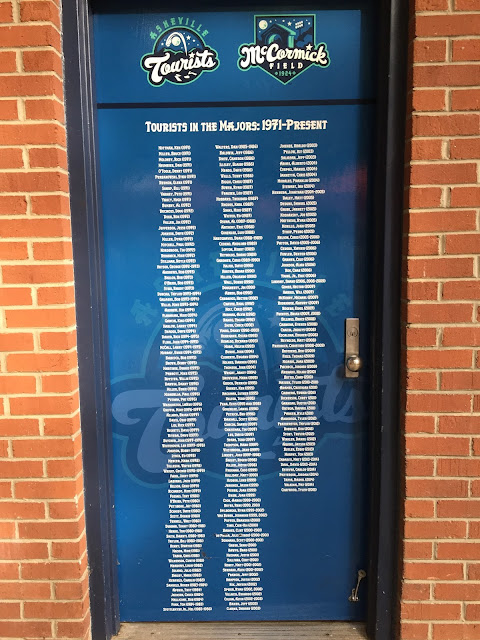 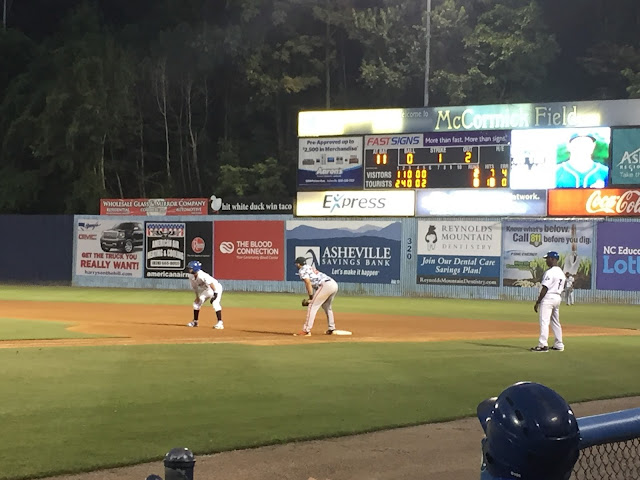 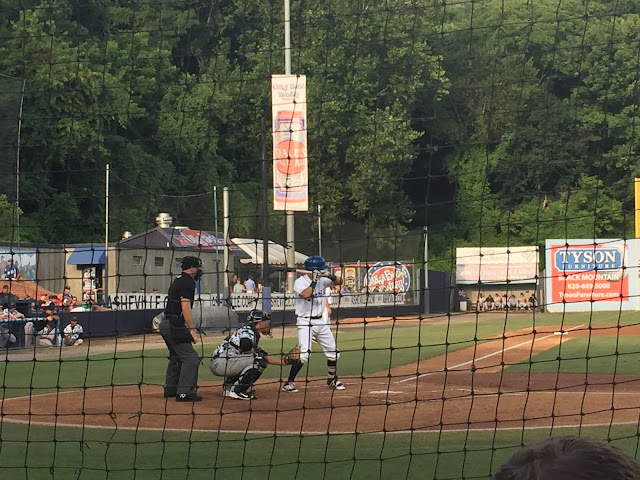 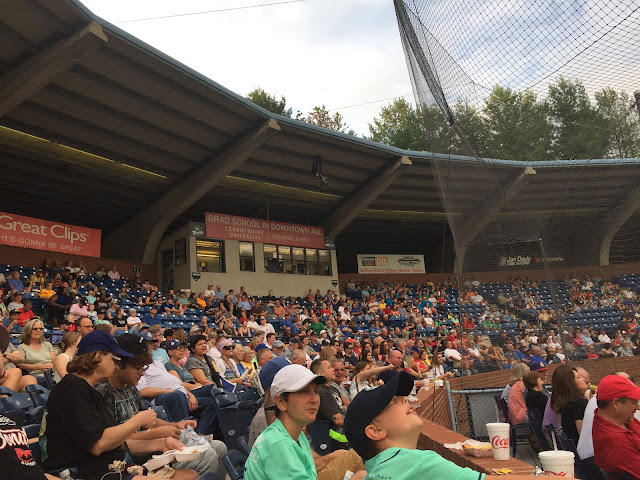 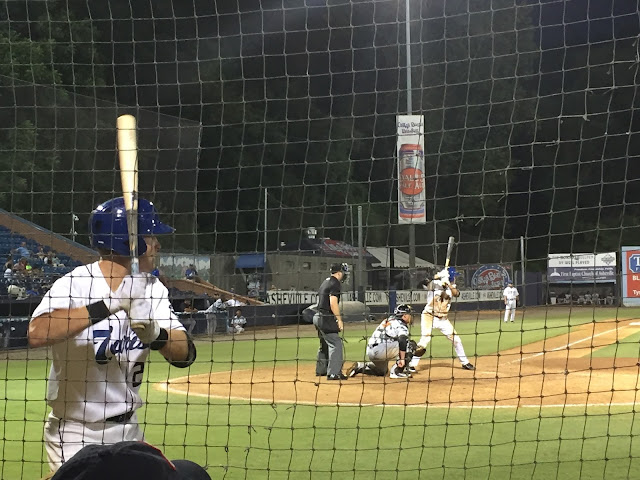 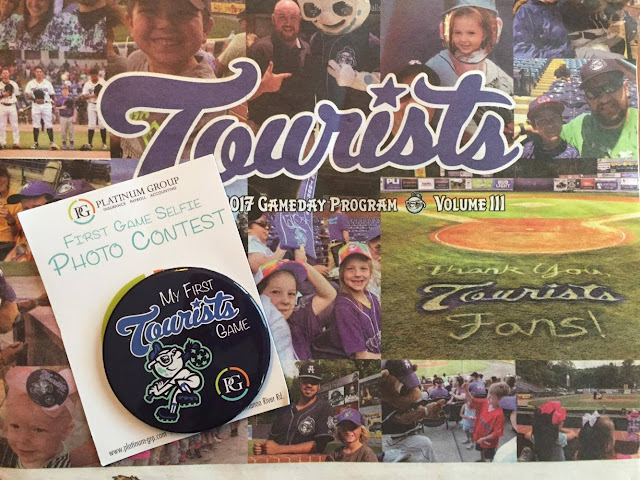